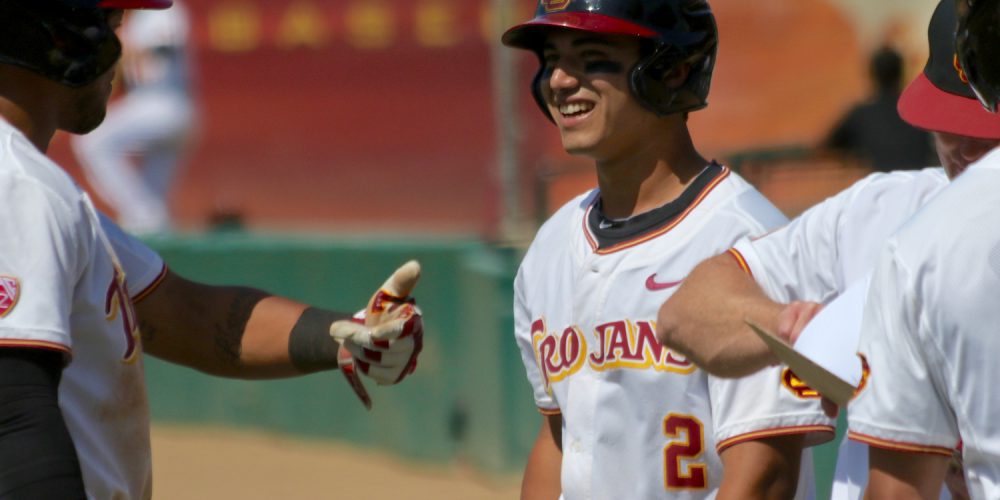 LOS ANGELES — Last summer, several people wondered aloud about Jeremy Martinez’s production as he struggled in the Cape Cod League. He uncharacteristically batted .202 and struck out 16 times in 109 at-bats.

But Martinez was in the midst of overhauling his swing to try to unlock his power potential to drive the baseball for more extra-base hits rather than knocking singles all over the yard. It was a strenuous time for Martinez, but he showed once more on Saturday that it has paid off.

Martinez had three hits, including a pair of doubles, and drove in two runs as USC beat No. 24 Arizona, 5-2, at Dedeaux Field to take a big series win after losing the opener when the Trojans gave up four runs in the ninth inning.

Arizona (28-16, 11-10) grabbed a 2-0 lead in the second inning on a two-run single by Cody Ramer. Ramer hit a sharp grounder up the middle, but shortstop Brandon Perez was position perfectly and was prepping to field and fire to first to end the inning when the ball took a super hop and bounced over Perez’s shoulder and into center field.

Undaunted, USC (20-22, 9-9) answered with a two-out rally in the bottom half of the inning. A pair of two-out doubles from Adalberto Carrillo and Perez got the Trojans on the scoreboard. Arizona then made the interesting decision to intentionally walk Corey Dempster, who Wildcats head coach Jay Johnson said was hitting like Mike Trout this weekend, to get to the .366-hitting David Oppenheim. The free pass backfired when Oppenheim poked a flare into shallow left-center field to tie the score, 2-2.

With the bases loaded after a walk, Martinez roped a pitch back up the middle to give USC the lead. Martinez ran hard out of the box and noticed the Arizona outfielders fielding the ball slowly. He turned hard around first and rushed to second for a two-run double. His next at-bat Martinez hit a more traditional double, driving the ball over the right fielder’s head. He finished 3-for-4 to raise his average to .377.

The Trojans added a run on a Timmy Robinson sacrifice fly in the fourth inning and then turned a 5-2 lead over to the bullpen. Marc Huberman pitched four hitless innings to pick up the win and Jeff Paschke locked down his third save with a scoreless ninth inning. 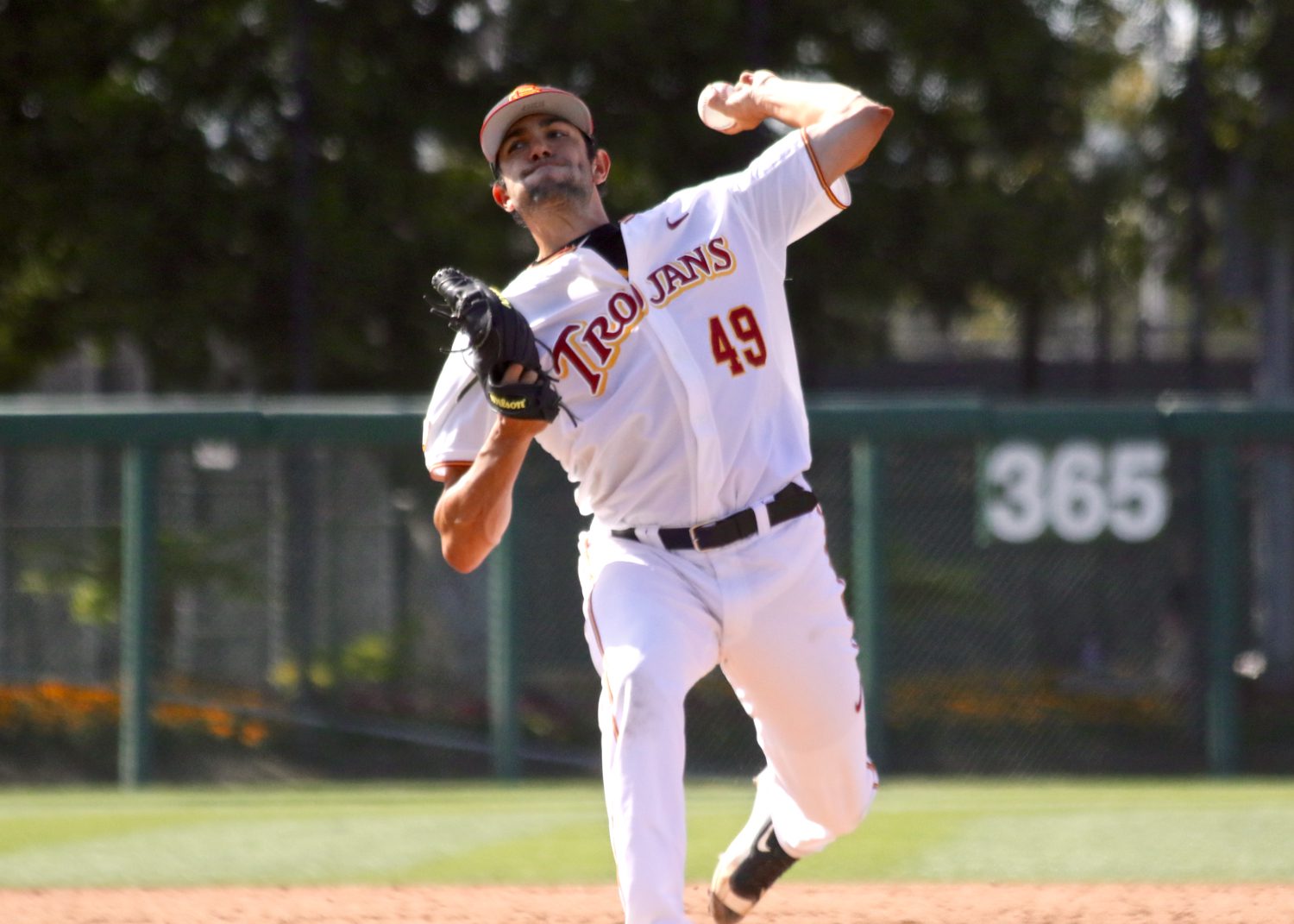 Marc Huberman has turned around his season. (Shotgun Spratling)

For a 22-day span from March 11 to April 3, USC reliever Marc Huberman and the bench became quite familiar with one another.

The senior pitched only twice and a three-run outing in an 8-0 loss to Loyola Marymount ballooned his ERA to 5.56. USC head coach Dan Hubbs didn’t trust the lefthander, who had been one of his most reliable bullpen options last year when he commandeered the closer’s role during the Trojans’ run to its first regional in more than a decade. He wasn’t throwing enough strikes. Huberman walked 14 batters in his first 11.2 innings.

But after the three-week period of seldom using Huberman, Hubbs made the determination that for USC to succeed Huberman needed to pitch more, not less. He ran Huberman out to the mound 10 times in the month of April.

On Saturday, Huberman capped off a stellar month with four hitless innings of relief and his first win since the opening weekend. He attacked the zone primarily with a fastball at 87-89 mph and relied on the natural movement that comes from his crossfire delivery to create weak contact.

For the month, Huberman pitched 14.2 innings and only allowed one run as he became the versatile lefty out of the bullpen Hubbs had envisioned before the season began.

Neither starting pitcher was very effective. Arizona’s Cameron Ming collected just five outs before he was replaced after allowing four earned runs on six hits. USC righthander Mitch Hart made it through four innings. He was hit hard for eight hits, but he did a very good job of minimizing damage and that was the difference in the game.

Hart stranded two runners in the first, third and fourth innings. He would have stranded another pair in the second inning, but Ramer’s two-out, hard hit ball up the middle took a bad hop, allowing Arizona’s two runs to score.

It was a Houdini performance from a pitcher the Trojans expected to rely on heavily this season, but is just starting to get into the flow after missing more than half of the season with an arm injury.

USC catcher Jeremy Martinez talks about his role in helping the Trojans take a crucial series against Arizona with a 5-2 win. Martinez also discusses the process and struggles of overhauling his swing in the offseason and what the key for USC to get on a hot streak to end the season is:

Arizona head coach Jay Johnson talks about the Wildcats’ 5-2 loss to the Trojans to drop the finale of a seven-game road trip and how his team has been successful thanks to some veteran players’ willingness to be coached:

USC LHP Marc Huberman talks about how he held a strong-hitting Arizona lineup without a hit for four innings to help USC pick up a series win over the Wildcats.

Huberman also discusses how his role has shifted this season from presumed closer to out of the bullpen rotation to significant contributor once again:

– Arizona is looking forward to a chance to get back to Tucson. The Wildcats dropped the final two games at USC to complete a seven-game, nine-day road trip. The final two days put a damper on a road run that had featured five strong wins. Not only did they take the losses, but someone also decided to take from them, breaking into the visitors clubhouse at Dedeaux Field Friday night.

– Every time you try to write off the Trojans as being finished, they somehow bounce back with a couple of big wins. Of course, every time you try to say they have turned things around, they will drop two or three in a row. So even though I wrote Thursday’s loss was the nail in the coffin, we’ll leave USC in the expansive list of talented, but flawed West Coast teams. Are they capable of going on a big run to end the season? Definitely. Will it happen? Well…we’ll have to stay tuned.