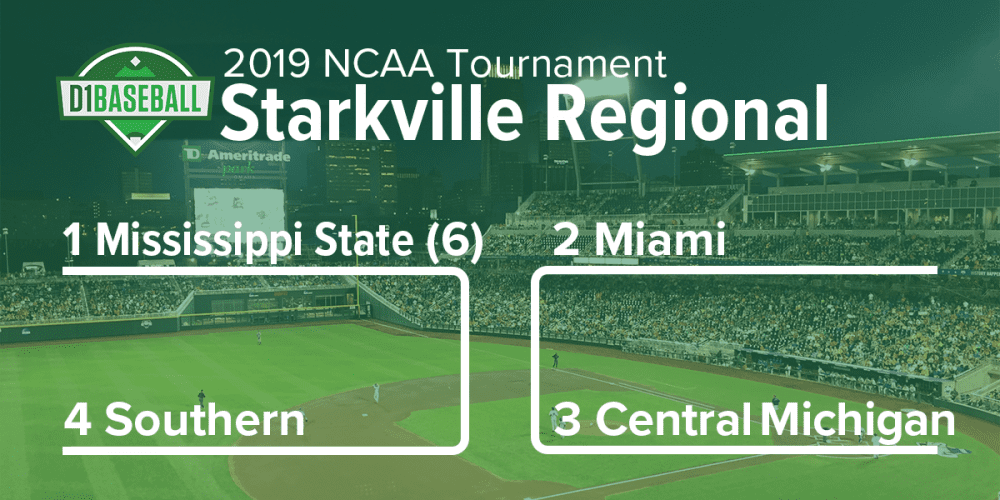 Mississippi State is throwing a party and inviting three programs that plan on sending the huge home crowds away sad. To do that, they will have to contend with one of the most talented rosters in the country. Miami may be upon for the task while Central Michigan brings in an eighteen game winning streak.

Most Exciting Player: Mississippi State’s Jake Mangum is one of the most appreciated players in SEC history. He hits. He steals. He takes extra bases. He runs down gappers and throws out base runners. He is the player opposing fans despise during the game but tip their cap to afterwards. Enjoy the senior while you can.

Best Hitter:It’s kind of hard to go against the SEC all-time hit leader in Mangum. He has 97 hits this year, bats from both sides and has a collection of clutch hits.

Best Defensive Player: Mississippi State catcher Dustin Skelton has made only two errors in 528 chances and has thrown out 18 out of 35 would-be base-stealers.

Best Pitcher: Mississippi State’s Ethan Small is the SEC Pitcher of the Year. He has 150 strikeouts in 90 innings. Has ten games with double-digit strikeouts and eight starts where he allowed one run or fewer. For pitching junkies, he is a must watch.

X-Factor: Miami two-way player JP Gates could affect the game at the plate where he leads the Hurricanes in batting or also on the mound where he worked in 20 games as lefthanded reliever.

Best Starting Rotation: Start with Small, follow that with a first round draft pick in JT Ginn and follow him with wily, fifth-year senior Peyton Plumlee. Mississippi State’s rotation is as good as any around.