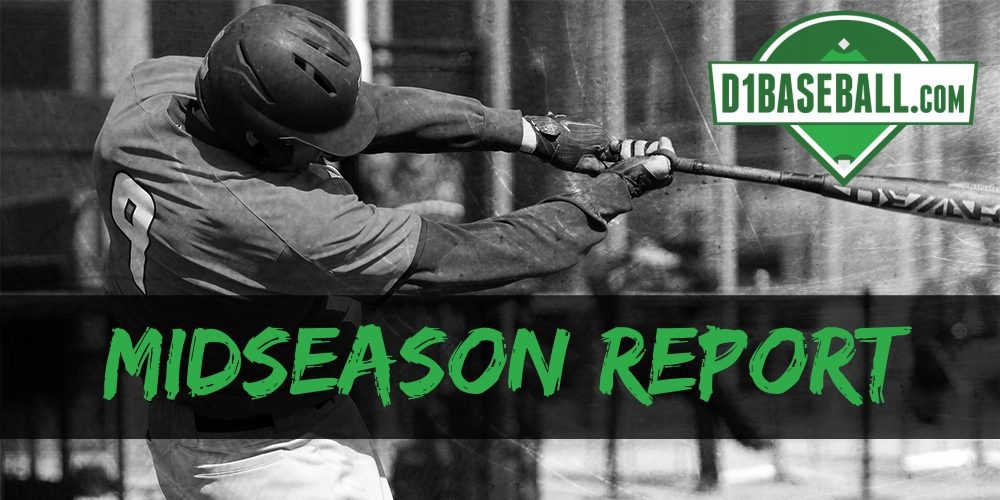 With seven weeks in the books, we’re halfway through the regular season for most teams, so it’s time to take a step back and look at the bigger picture before we launch into the second half. Let’s hand out some midseason awards and identify some of the top storylines of the first half.

It’s hard to match the season Bren Spillane is having at the plate. (Illinois photo)

Just call Spillane the winner of the Brent Rooker Award so far this season.

Last season, Rooker, who was a National Player of the Year finalist with Louisville’s Brendan McKay, went from a solid player with power to an off the charts hitter with insane power, as he led Mississippi State to an NCAA super regional.

Spillane showed big-time potential out of high school, but dealt with injuries his first two seasons at Illinois. He started to get healthy and figure things out near the end of last season, as he finished with a .295 average, six doubles, five homers and 23 RBIs.

But he’s reached an unconscious level so far this season, and has helped the Illini get off to a start that puts them in great position to reach the NCAA postseason with a solid finish the second half of the season.

How good has Spillane been? He’s hitting .494 with 13 doubles, a triple, 14 homers and 38 RBIs, while also having a .579 OBP, 1.149 slugging percentage and a ridiculous 1.728 OPS. He’s not just a power hitter, either. Spillane could easily play the outfield for the Illini, and has speed to add with 12 stolen bases so far this season.

Here’s what one coach had to say about Spillane in our Golden Spikes Spotlight feature a few weeks ago:

“Spillane is a kid in the middle of the lineup who can hit out of the park at any time, and he’s a freak. He’s really tough to pitch to,” the coach said. “I think when you look at his approach, when he’s in positive counts, he’s trying to hit it out to center field. But he doesn’t get fooled a lot. You can pitch to him a little bit, but if you try to come in late, he has enough bat speed to hurt you that way. And if you live away, he’ll hurt you there, too. He can hit a single, and he can mash with some power, too.

“The biggest thing about him is that he doesn’t hit the ball on the ground a lot, he knows how to elevate pitches and hit the ball absolutely anywhere,” he continued. “He’s one of those guys who if he’s healthy in high school, might not even end up on campus. He’s just really good. He ran a 4.15 down the line when we played them and he can hurt you on the base-paths. He doesn’t have great baseball instincts just yet, but they’re good enough and he can run. He’s really athletic and just adds another dimension to that team.”

While Mize, our Midseason Pitcher of the Year, appears to be a potential top pick in the upcoming MLB Draft, it’ll be fascinating to see where Spillane falls in line. Spillane doesn’t have the offensive track record of a guy like Rooker, who ended up being a first-round pick last summer. But he has the rare combination of big-time raw power and speed and athleticism.

He’s been the biggest game changer in college baseball to this point.