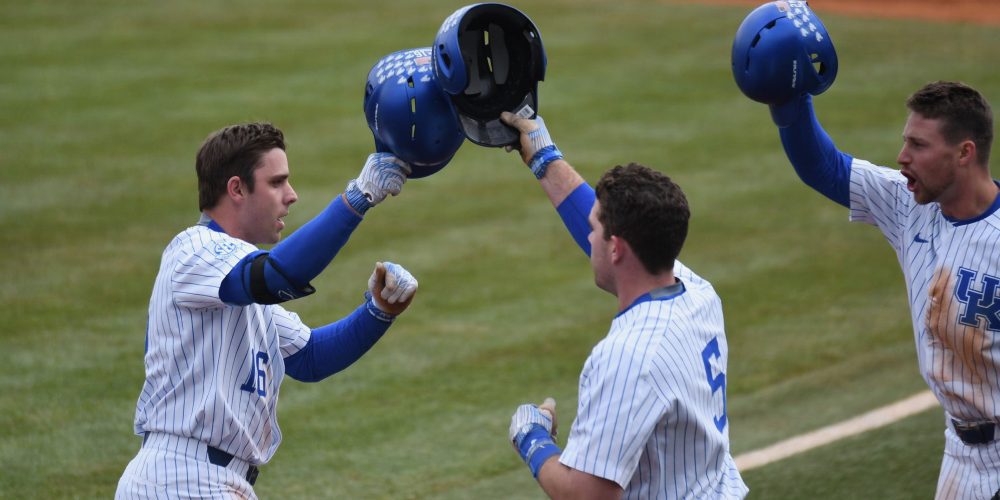 It's been a fun season so far for the Wildcats. (Aaron Fitt)

• Mature, complete Kentucky has the look of a bona fide title contender
• Lingering observations on the Wildcats and Texas Tech after UK’s series-clinching win

LEXINGTON, Ky. — There was a whole lot of action over the last two days at Cliff Hagan Stadium. These were two long, high-scoring games between two teams that grind out at-bat after at-bat and make things happen with their aggressiveness on the basepaths. But one particular sequence in Saturday’s 11-6 Kentucky win stood out above all the other fireworks.

With the score tied 5-5 in the sixth inning, Kentucky had runners at second and third for No. 9-hole hitter Trey Dawson. It was an obvious squeeze situation, and Texas Tech was ready for it — but Dawson executed, and Luke Heyer slid in just before the tag to give Kentucky the lead.

The next batter, leadoff man Troy Squires, squeezed again, a perfect bunt to the pitcher’s left that scored another run and resulted in a single. And then the next batter, Ben Aklinski, executed yet another squeeze — and again the Red Raiders couldn’t even make an out at first base.

“I think there were five pitches, three runs, and not one ball got past the pitcher’s mound, so welcome to Kentucky baseball,” Squires said.

“The execution of the bunt, we were willing to put the bunt down and then the execution’s just another thing. We’ve got nine guys willing to do that any time, and I think that’s what makes us good.”

Of course, there’s a whole lot more to Kentucky baseball than just the inside game, as Squires himself demonstrated in the fourth inning, when he put the Wildcats ahead 5-4 with an opposite-field three-run homer to right on a 92 mph John McMillon fastball. The Wildcats are loaded with game-changing power, but they’re just as willing — and just as able — to beat teams with their bunt game and their aggressive baserunning, at any given moment.