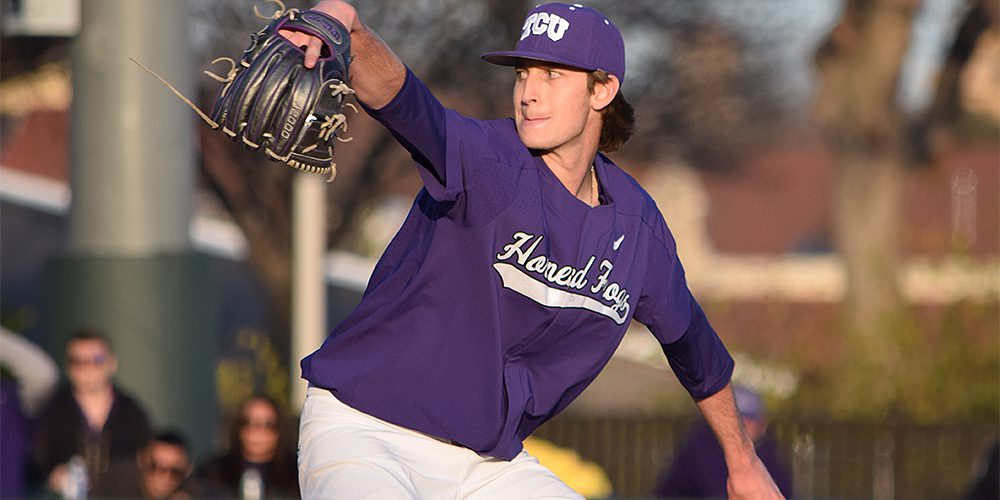 FORT WORTH, Texas — Freshman lefthander Nick Lodolo has everything he needs to be one of the best pitchers to come through TCU.

Yes, that’s a bold proclamation. But it’s also the truth.

Plenty of people in the baseball world don’t even think Lodolo should be on a college campus right now. He was the 41st overall pick to the Pirates in last summer’s draft. And in the new draft system, it’s a total shock to the system when someone such as Lodolo spurns an opportunity to sign to head to college. But Lodolo was upfront – he was serious about going to college, and he lived up to his end of the bargain.

Now, he continues to develop into an elite weapon for the Frogs. Last week against Penn State, he gave up a two-run homer to Willie Burger in the first inning and didn’t allow a run the rest of the way. He put his poise on display in the first start of his career against the Nittany Lions.

He plotted almost the same path Saturday afternoon in an 8-4 win over Arizona State to even the series at 1-1.

“The story of the game was Nick and from their end, they’d say it was opportunities lost, From our end, we’d say that Nick found a way to make some pitches,” TCU coach Jim Schlossnagle said. “I thought he made some really good pitches when he needed to make them.

“They had some really good hitters in the middle of the lineup, and when he started getting that breaking ball over for strikes, it changed things,” he continued. “At that point, he was able to get back to beating them with the fastball a little bit.”