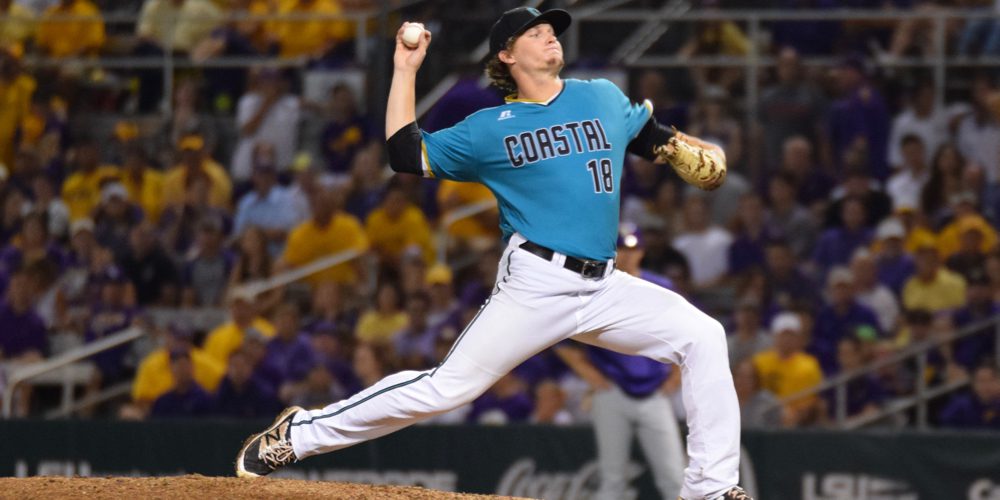 Teams On The Upswing: Week 7

Every Monday, Aaron Fitt and Kendall Rogers take a look at 10 teams that boosted their stock with strong showings over the weekend. Here’s Week Seven’s batch of teams that raised their profiles.

Like clockwork, the Chanticleers have found their stride in conference play — even though they’re in a new conference. After dropping their first-ever Sun Belt series at Texas State, Coastal has swept back-to-back series — vs. Arkansas State and at Georgia State. Ace Alex Cunningham (9 IP, 5 H, 0 R, 0 BB, 11 K) was masterful in Friday’s 4-0 win, becoming just the second Chanticleer ever to record back-to-back complete-game shutouts. How’s this for efficiency? Cunningham went to a three-ball count just once in nine innings, and he only had eight two-ball counts. That, obviously, is absurd. Cunningham was already a battle-tested warrior who played a huge part in last season’s title run, but he has blossomed this year into exactly what Coastal truly needed — a bona fide Friday ace. Meanwhile, Andrew Beckwith appears to be back to his old self. Beckwith came out of the bullpen Saturday and threw six strong innings, allowing just an unearned run on three hits and a walk while fanning six.

The offense did the heavy lifting the  next two days, scoring 25 runs. Dalton Ewing led the way with seven hits on the weekend of them, and Jordan Gore had six. Coastal is playing its best baseball of the year heading into a huge Sun Belt showdown against UL Lafayette.