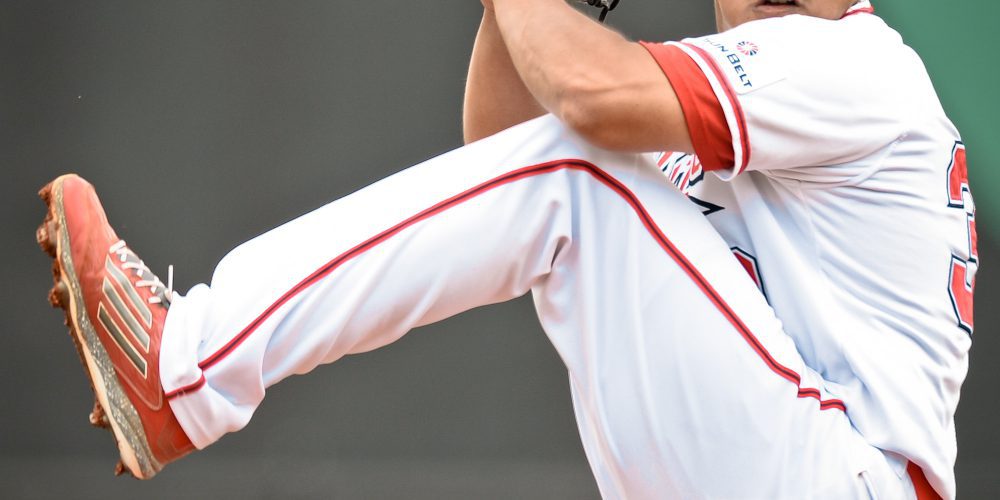 1. Florida’s Logan Shore Is A Machine

We’ve all become accustomed to watching the talented Gators righthander methodically dominate teams during his career, which is in its third year. Though Shore suffered an injury setback last season when facing the Hurricanes early in the season, he’d have none on that in this year’s series opener down in South Florida.

Shore was pretty much Shore, and Florida was, well, Florida. The top-ranked Gators got a Herculean effort from the talented righty in a 5-0 victory. Shore was outstanding against the Hurricanes, striking out eight, not walking anyone and allowing just four hits in a complete game shutout performance. He also threw 95 pitches, 68 for strikes.

While UF lefthander AJ Puk might get more headlines because of his frame and prospect status, Shore isn’t far behind in that category and could see his stock rise even more with a strong season.

Shore is the machine that makes one of the nation’s elite pitching staffs go.

We discussed the rise of Quinn last weekend as he hit for the cycle during a home weekend series to begin the season. Well, now one of the nation’s elite players and prospects is off to yet another outstanding start this weekend. His day was simply unbelievable in a doubleheader against BYU.

In the first game of a split doubleheader, Quinn hit a home run and knocked in a run. But, his big surge came in the second game, as he hit three, yes, three homers and knocked in seven runs to take down the Cougars.

Quinn, a physical 6-foot-3, 220-pounder, has scouts and coaches in the region buzzing, and it’s easy to see why. After today, he’s now hitting a ridiculous .533 with three doubles, a triple, seven homers and 17 RBIs.

Seven homers at this juncture is just absurd.

3. Arkansas Looks To Be In Fine Shape

The Razorbacks finished the 2015 season on a high note with a trip to the College World Series, and the general consensus coming into the spring was that the Hogs might take a slight step back. Or, maybe not.

The Hogs put together a rather impressive performance in a 5-2 win over Jon Duplantier and Rice, and looked like a team not taking a step back anytime soon. 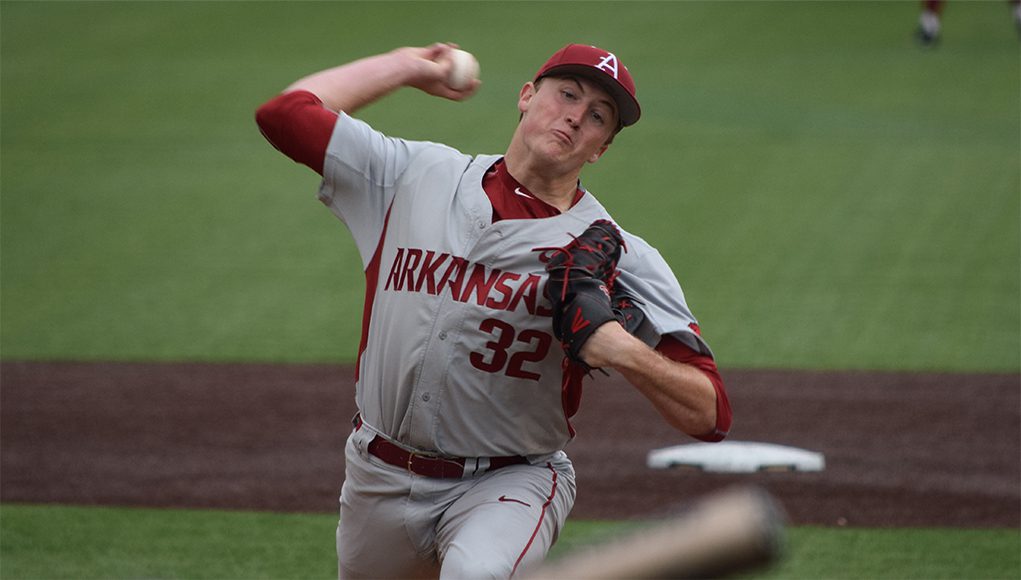 Arkansas freshman Eric Cole and sophomore Luke Bonfield look the part, while one of the pleasant surprises was the play of third baseman Carson Shaddy. As we’ve documented in the past, the Hogs lost one of the best in the business defensively in Bobby Wernes, but Shaddy made some terrific plays on the hot corner against the Owls. Meanwhile, righthander Zach Jackson continues to look like the filthiest arm in college baseball when he’s commanding his fastball. Jackson was consistently low-to-mid 90s with his fastball, while also throwing an outstanding mid-80s changeup and low-to-mid 80s curveball with good depth.

The Razorbacks are still very much a work in progress as coach Dave Van Horn will happily admit, but he has to be very encouraged by the play of Shaddy, Jackson and plenty of others.

The Hogs look like the typical Hogs at this juncture.

We’re not exactly surprised by this observation, but the Cougars look like a true forced to be reckoned with the rest of the season. The Cougars made some waves on the national stage last weekend by taking a home series over Nebraska in convincing fashion, outscoring the Big Red 20-8 in the final two games of the three-game set.

Well, the Cougars got right back to business Friday night on the road against hard-hitting Florida State. Charleston senior righthander Nathan Helvey put together an impressive start against the Seminoles in a 2-1 triumph, striking out three and allowing just two hits in 5.1 innings. 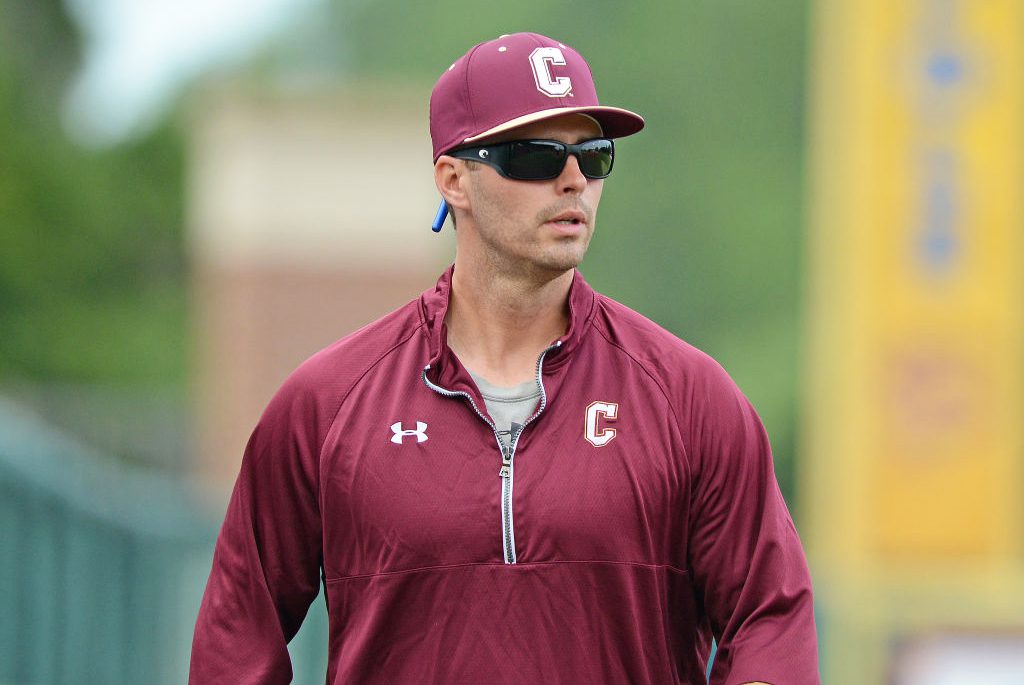 Matt Heath has to be pleased with Nathan Helvey and the Cougars. (C of C)

In two starts thus far, Helvey has yet to allow a run, while he has struck out seven and walked five in 11.1 innings with teams hitting .162 off him.

With a win and Helvey done for the weekend, the Cougars now turn their attention to another talented starting pitcher in fellow righty Bailey Ober to clinch a series win over the Seminoles.

The Matt Heath era is off to a decent start, I’d say.

Baseball players have good days, and yeah, they have bad days, too. Just ask Louisville senior righthander Kyle Funkhouser, who hit the road Friday night and put together one of the worst starts of his career in a 6-5 loss to Ole Miss.

Funkhouser wasn’t crisp throughout the night against the Rebels and was unable to get into a groove after Ole Miss outfielder J.B. Woodman hit a two-run home run off of him in the first inning to get the scoring started.

The righty, who was drafted in the first round last summer, struck out six, walked seven and allowed six runs on three hits in just 3.2 innings of work.

Funkhouser will have better days, that’s for sure. On a side note, give the Louisville bullpen much credit for giving its offense a chance to storm back and almost win. Chandler Dale tossed 1.1 shutout innings out of the pen, Sam Bordner did the same in 2.2 innings and Lincoln Henzman tossed a scoreless eighth inning.

Is it possible that South Alabama ace Kevin Hill has somehow managed to get even better than he was a year ago, when he went 10-0, 1.73 to win Sun Belt Conference pitcher of the year honors? In his season debut last week, Hill struck out 10 and allowed just one hit over six innings against Evansville, and he outdid himself in his second start at Georgia.

This time, Hill went the distance, allowing just a run on three hits while striking out 12 and walking none to lead the Jaguars to a 3-1 win against Robert Tyler (6 IP, 2 H, 1 ER, 0 BB, 8 K) and the Bulldogs. According to South Alabama pitching coach Bob Keller, Hill only went to three-ball counts twice all game. Hill is the ultimate competitor on the mound, and the fifth-year senior is truly a master of his craft. We’ll have more on the remarkable Hill over the next week.

Last weekend in Myrtle Beach, I wrote that Virginia’s bullpen is a reason for concern going forward. Closer Alec Bettinger was shaky in Sunday’s loss to Coastal Carolina, and he struggled again Friday against East Carolina, which came from behind to tie the game with a run in the ninth and then scored three more in the 10th to win 8-5. Bettinger was charged with four earned runs on two hits and three walks in 2 1/3 innings.

That’s not to take anything away from ECU, a very good team loaded with hard-nosed veterans who compete until the very end. The Pirates executed very well in the final two innings, using a sacrifice bunt and a sacrifice fly to tie the game in the ninth, then grinding out three runs on just one hit (a go-ahead RBI double by Brady Lloyd) in the 10th. Heading into this series, ECU looked like it had a legitimate edge in the bullpen, and that advantage proved crucial on Friday, as Davis Kirkpatrick (4 IP, 1 ER) and Joe Ingle (2 IP, 1 H, 0 R, 1 BB, 4 K) turned in outstanding relief work for the Pirates.

3. Every Friday is Gallentine’s Day

I can’t get enough of the delightful pun on Zac Gallen’s name that North Carolina’s baseball twitter feed coined last week — and Gallen seems determined to make sure we keep having cause to use it. UNC’s junior ace turned in his second straight gem against a ranked opponent Friday, holding Oklahoma State’s talented offense to just a run on three hits over seven sterling innings, striking out nine. UNC needed that kind of performance, because Oklahoma State got strong pitching from Thomas Hatch (5 IP, 1 ER) and Tyler Buffett (3.1 IP, 1 ER) in a game that was knotted 1-1 after eight innings. But UNC freshman Kyle Datres broke the tie with a walk-off RBI single in the ninth. The Tar Heels are one win away from starting the season with back-to-back series wins against top-12 teams.

Pepperdine knocked No. 4 Texas A&M from the ranks of the unbeaten with a 7-5 upset Friday behind big days from Pepperdine’s core group of veterans. Upperclassmen Matt Gelalich, Aaron Barnett, Brad Anderson and Manny Jefferson combined for eight hits, two home runs and six RBIs to lead the Pepperdine offense behind A.J. Puckett (7.1 IP, 5 H, 4 R, 3 ER), who settled down nicely after giving up four runs in the first three innings. That group of Waves has won a lot of games in their careers, and they make Pepperdine very dangerous against any opponent. The West Coast Conference looks very competitive this year, but it would be folly to forget about the two-time defending WCC champs.

5. Longhorns strike back behind Johnston

After Stanford won a stellar pitching duel in Thursday’s series opener at Texas, the Longhorns fought back to even the series with a 4-3 victory Friday. UT’s Kyle Johnston pitched like the rising star that he is, allowing just two runs on four hits over seven strong innings, striking out nine. The Texas offense did all of its damage early against Stanford blue-chip freshman Tristan Beck (3 IP, 4 R, 3 ER), and Texas held off Stanford’s comeback bid. Both of these pitching staffs have some serious firepower, and Texas fans should be excited to watch Johnston and flame-throwing freshman Chase Shugart toe the rubber this spring. Shugart notched his first career save, working 1 2/3 scoreless innings.