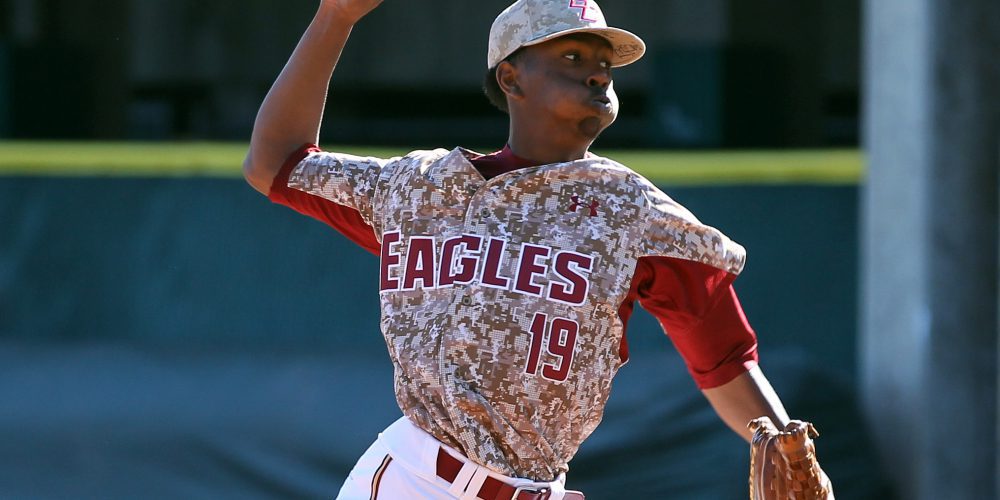 1. Team of the day: Boston College

The Eagles entered the weekend seemingly out of the mix for a postseason berth for the time being with a 5-11 conference record, but that has all changed after clinching a series win over Louisville with a 2-1 victory on Saturday. With the win, BC is now 7-11 in the ACC and at least in the discussion with an RPI climbing up near 50.

As you might imagine, electric BC righthander Justin Dunn put together a solid performance in the win over the Cardinals, striking out four, walking one and allowing just a run on six hits in six innings. Dunn showed terrific stuff, sitting 93-96, and up to 97 with his fastball, while also showcasing a good 86-88 mph changeup, sharp 82-84 slider and feel for a 79-81 curveball.

While the series win certainly keeps BC’s postseason hopes alive, there’s growing concern about the Cardinals on the road. UL has now dropped every road series this season, with opponents including Miami, Florida State, Ole Miss, and now, Boston College. Those are quality clubs, but still, UL will need to take care of some business on the road down the stretch to earn a national seed.

While the Pac-12 has been a little lackluster this season, the Washington Huskies have taken advantage of the situation and put together an impressive campaign thus far, increasing their profile even more on Saturday with a doubleheader sweep of St. Mary’s by scores of 3-1 and 6-1.

In the first game, UW starting pitcher Joe DeMers allowed just a run on six hits in six innings, while in the second game, Ryan Schmitten allowed a run in four innings, while the bullpen was terrific with Will Ballowe tossing three shutout frames and Lance Berringer finishing the contest with a pair of scoreless frames.

With the wins, UW leads St. Mary’s in the series 2-1 heading into Sunday’s finale. UW’s RPI is up a couple of spots after the victory, and finishing the weekend with a 3-1 series win would definitely help the Huskies improve their overall profile.

As a member of the Big East Conference, the Bluejays don’t have any opportunities to rack up marquee series wins. So, this weekend’s road series at BYU was the only opportunity for that the rest of the regular season, and CU couldn’t have been more impressive after a crushing loss to begin the series. The Bluejays captured a series win with a pair of wins on Saturday – 8-5 and 10-2.

In the first game, Michael Emodi finished the early afternoon with six RBIs, while shortstop Nicky Lopez had four hits and an RBI, while leadoff hitter Daniel Woodrow went 3-for-6 with two RBIs. 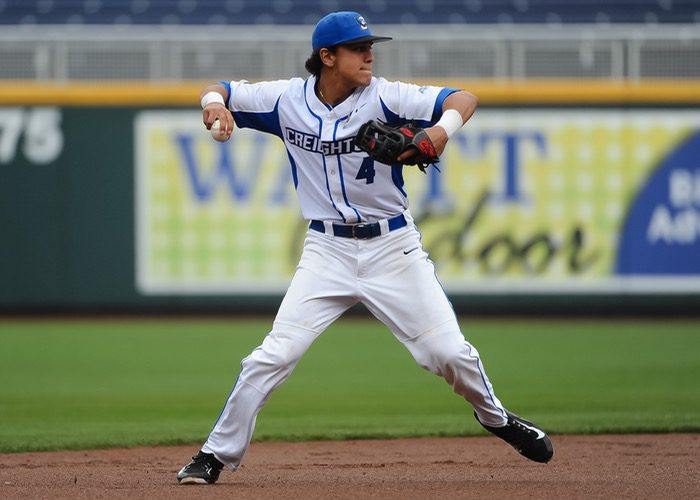 In the second game, Ryan Fitzgerald smacked a home run, while the top five hitters in Creighton’s lineup finished the afternoon with nine hits combined.

With the win, Creighton’s RPI is up to 21 with a 27-9 overall record. In other words, the Bluejays would likely be in the postseason no matter what happens in the Big East tournament at this point, but we will see if that stays the same heading down the stretch.

The Crimson Tide hit the road hoping to pull off a shocking series win over Texas A&M, and they are a win away from accomplishing that goal after dominating A&M on Saturday in a 7-4 victory. The contest was 7-0 until the Aggies responded with a four-run ninth to end things.

So, how about this performance from Alabama starting pitcher Jake Walters? Walters was clearly effective against the Aggies despite walking six batters, striking out just one and allowing five hits in 5.2 innings. Walters just found ways to escape jams, with the No. 3 Aggies leaving 12 runners on base.

Alabama’s offense also had much success against the Aggies, with Cody Hendry having a big day and Chandler Taylor smacking his second homer of the weekend.

With the win, the Crimson Tide actually has accomplished what it needed to – a road win over a marquee RPI team.

Shawaryn and the Terrapins haven’t had the season they expected thus far, but the talented righthander put together a performance to remember in Saturday’s 6-0 win over Purdue.

Shawaryn struck out 10, walked just one and allowed three hits in eight shutout innings. He also threw 107 pitches, 71 for strikes. 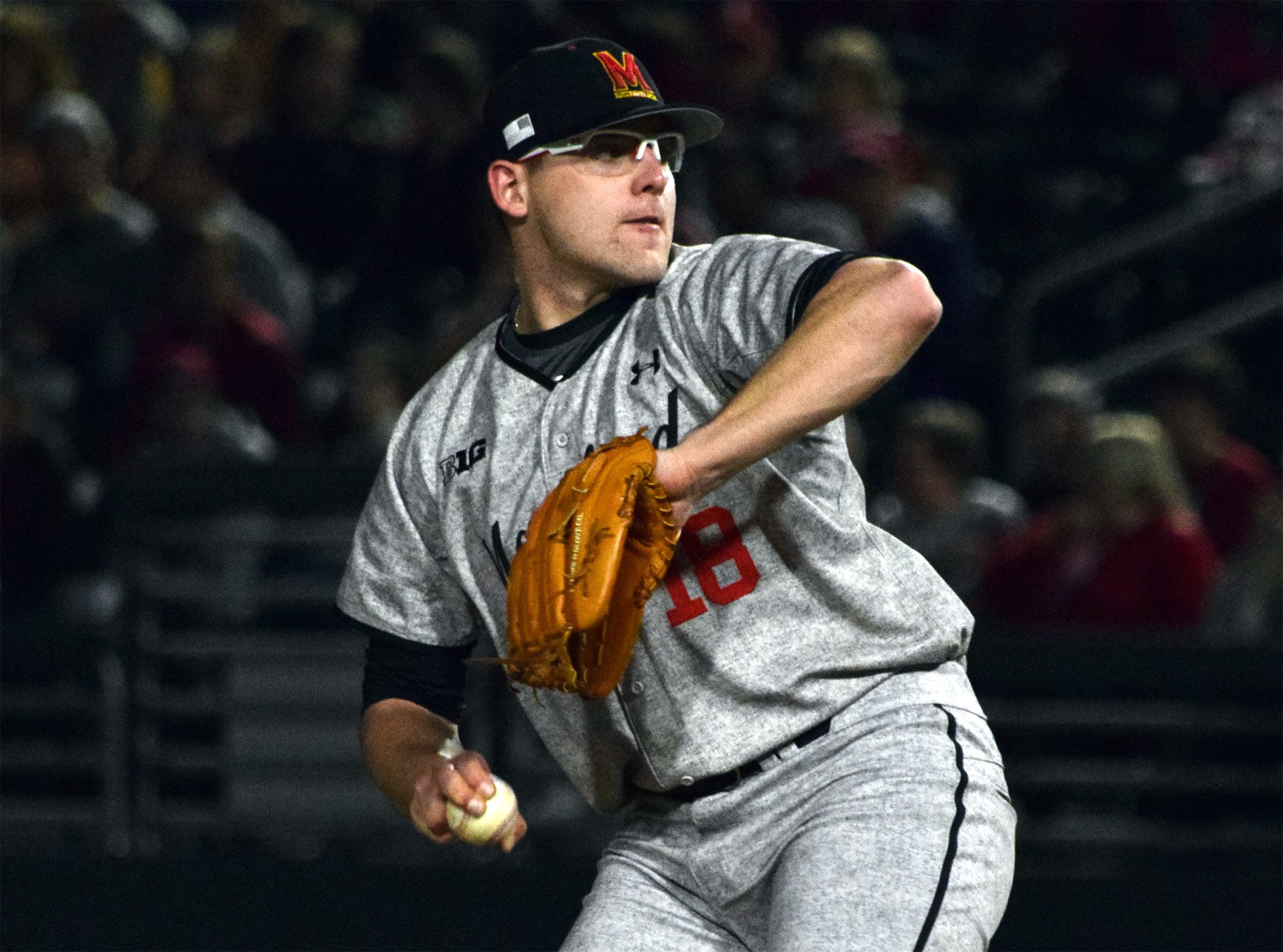 With the win over the Boilermakers, the Terps are now 20-18, 6-5 in the Big Ten and will need to be sharp down the stretch to reach the NCAA postseason.

1. Upset Of The Day: Wake Forest over North Carolina

Better late than never. Wake Forest, the preseason sleeper I repeatedly praised in the fall and winter, looked like a bust just two weeks ago after it was swept by NC State to fall to 5-10 in the ACC. Now the Demon Deacons look like a bona fide regional team. Wake followed last weekend’s huge series win against Florida State by winning another big series against No. 17 North Carolina this weekend. Nate Mondou had four hits and Kevin Conway had two RBIs — including the game-winner in the eighth — to lead the Deacs to a series-clinching 5-4 win on Saturday. It took some time for Wake to figure out its pitching, but it seems to be coming together. Drew Loepprich (5.1 IP, 3 H, 1 ER) followed up Parker Dunshee’s strong outing Friday with another good start Saturday, and two-way star Will Craig worked the final 2.1 innings to earn the win in relief. Suddenly, Wake is 9-11 in the ACC and up to No. 33 in the RPI, and an at-large berth looks well within its grasp.

UNC continues to slide, however. The Tar Heels have now lost four of their last five series (the lone series win was at last-place Virginia Tech, where UNC still managed to hurt itself by failing to sweep). At 9-11 in the ACC and with a series left against Louisville, Notre Dame and at NC State, the Tar Heels better right the ship in a hurry. They’re still in great shape in the RPI at No. 16, but last year they were left out of regionals despite a good RPI because of their poor finish, so they need to reverse their momentum to avoid repeating that fate.

2. Is something Bruin’ in Westwood?

We talked plenty over the last two weeks about Oregon’s resurgence, and suggested that the Ducks might be on course to follow last year’s path to the postseason, overcoming a rough March and getting hot down the stretch. Meanwhile, UCLA looked just about done after dropping four straight series heading into this weekend’s matchup against the Ducks.

But suddenly, UCLA looks more like the second-half darkhorse, and Oregon has to go back to the drawing board. The Bruins completed a dominating sweep of the Ducks with a 13-1 win Saturday behind Kyle Molnar (7 IP, 2 H, 0 R, 1 BB, 5 K). Six Bruins recorded multiple hits as part of a balanced 14-hit attack against David Peterson and the Oregon pitching staff. UCLA climbed back over .500 (19-18) for the first time since April 1, and it is also rebounding in the RPI, where it is back up to No. 67. When we ranked UCLA No. 11 in the preseason, we anticipated the Bruins would get starting pitching like it got this weekend from Griffin Canning, Grant Dyer and Molnar. Now, Oregon’s anemic offense can make any pitching staff look good … but regardless, there’s room for optimism that maybe UCLA has figured it out. 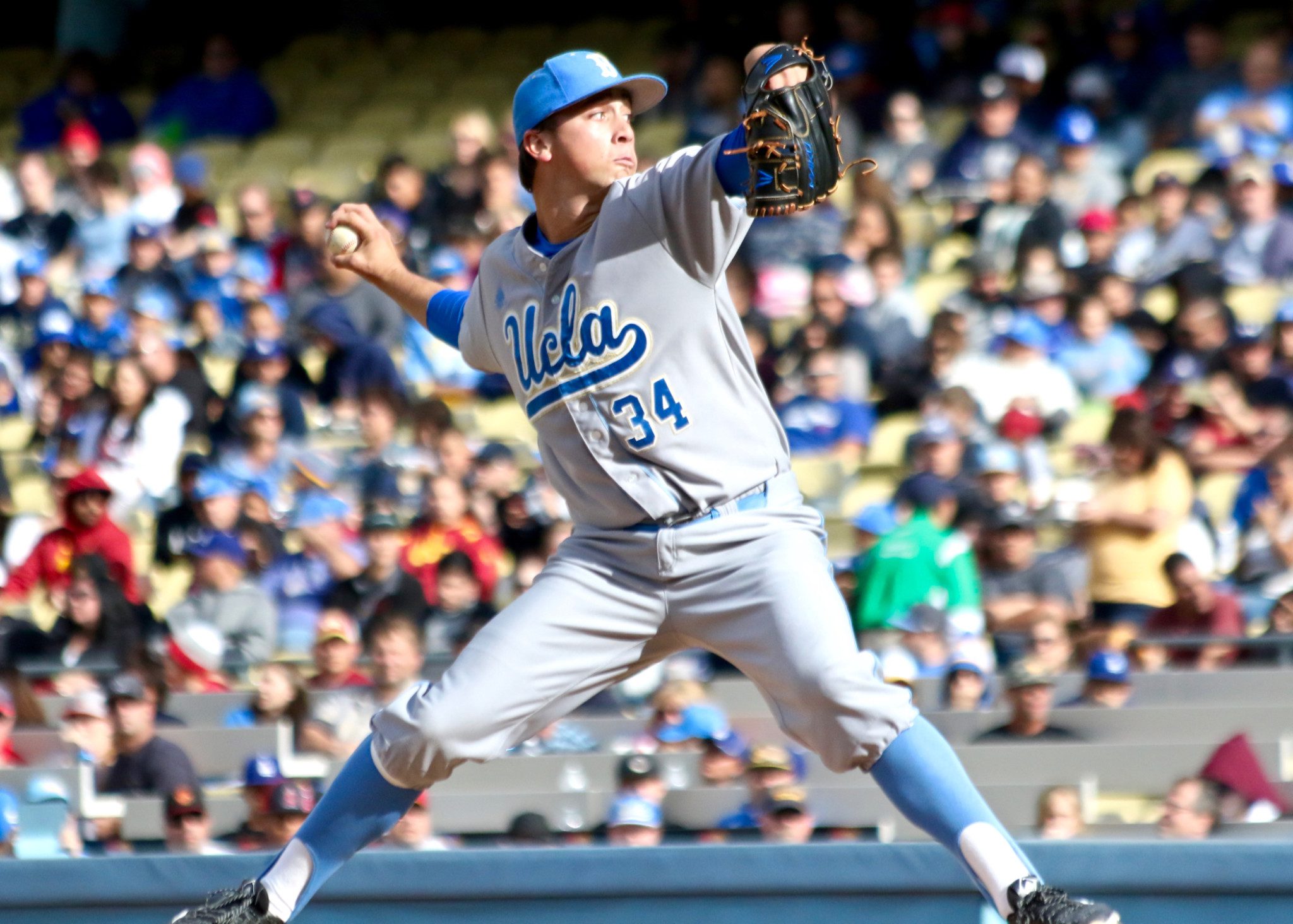 As we wrote yesterday, Cal Poly is quietly surging in the Big West, and the Mustangs made their biggest statement yet on Saturday, clinching a huge series against No. 13 UC Santa Barbara with a 10-5 win. John Schuknecht and Michael Sanderson combined for five hits, five runs and five RBIs to lead the Poly offense in support of flame-thrower Erich Uelmen (7 IP, 8 H, 5 ER), and the Mustangs knocked around Noah Davis (4.1 IP, 8 H, 8 R). With the victory, Cal Poly vaulted a whopping 36 spots to No. 72 in the RPI. Just like that, the Mustangs have an at-large spot within their sites.

4. Rice’s Ottomatic closer does it again

Sunday’s series finale in Hattiesburg is shaping up to be a good one. The first two games between Conference USA powers Rice and Southern Miss have been hard-fought one-run affairs, and the Owls evened the series up with a 4-3 win Saturday. Connor Teykl drove in Dane Myers for the tying run in the sixth, and then Tekyl drove in Myers again in the eighth to give the Owls the lead for good. And Rice closer Glenn Otto did the rest, working 2 1/3 innings of hitless, scoreless relief to improve to 5-1 on the year. Otto struck out three and did not issue a walk, improving his ERA to 1.30 and his strikeout-walk mark to 51-11 in 41.2 innings this year. Otto was the closer on our midseason All-America team, and you’d be hard-pressed to find a more valuable reliever in college baseball through 10 weeks this season.

Sunday’s winner will not only take the series, but it will move into sole possession of first place in Conference USA, because the two clubs are now both 13-4 in the league. Expect another great atmosphere for the rubber game after Saturday’s contest drew 4,950 fans — the sixth-largest crowd in the history of Pete Taylor Park.

Like UCLA, Arkansas was just about left for dead just a week ago, when it was swept for the second straight weekend to fall to 4-11 in the SEC. The Razorbacks still face a major uphill battle to put themselves into at-large position, but they took a big step forward this weekend by winning a road series at Kentucky. The Razorbacks’ pitching has been rightly maligned this year, but the Hogs got it down on the mound in the first two games of this series, getting back-to-back shutouts from Dominic Taccolini (over 10 innings of work) and Zach Jackson (who threw a seven-inning shutout in the first game of Saturday’s doubleheader). Jackson allowed just two runs and three hits while striking out eight in his complete game, leading the Hogs to a 2-0 win that clinched the series.

Kentucky managed to salvage the series finale later Saturday by scoring twice in the bottom of the seventh and final inning to earn a walk-off 5-4 victory, but nonetheless this was a successful weekend for Arkansas, which rocketed up 39 spots to No. 88 in the RPI after Saturday’s action. At 6-12 in the SEC, the Hogs obviously need to keep winning series — and that won’t be easy with Texas A&M, LSU and Mississippi State still ahead on the schedule. We’re still not ready to bet on Arkansas making it to the NCAA tournament this year … but at least this series kept hope alive. Climbing into the top 50 in the RPI looks a lot more achievable now than it did a week ago — but the RPI is only part of the battle. The bigger challenge will likely be climbing the conference standings.