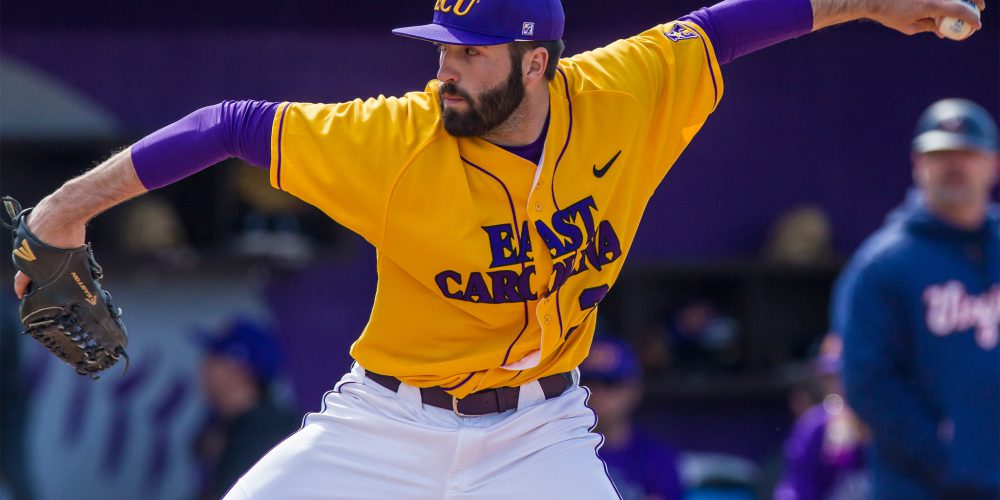 Remember when the Pirates hired Cliff Godwin away from Ole Miss, and we hailed that as an incredibly good hire? Well, you’re beginning to see why Godwin was the perfect hire for a Pirates program looking for some direction.

ECU made some real progress in Godwin’s first season in charge of the program last season by reaching the NCAA postseason. Now, in his second year, this team looks like it has the potential to accomplish even more on the national stage, sitting at 6-0 following a thrilling 6-1 road win over Virginia to clinch a crucial series victory.

ECU junior lefthander Jacob Wolfe pieced together an impressive start against the Cavaliers, striking out a pair of hitters, while also allowing just a run – unearned – on four hits in six innings and throwing 91 pitches, 62 for strikes. The ECU bullpen also did a fabulous job with Nick Durazo closing things out with three strikeouts and just two hits allowed in three shutout frames.

The Pirates now enter the serious top-25 discussion and bigger and better things could once again be on the horizon.

How about the performance the talented Matadors lefthander put together? Greg Moore and his coaching continue to stockpile much improved talent at Northridge, and Kenny Rosenberg is another quality arm to track.

The Matadors (5-2) faced off with Northern Colorado on Saturday and won both ends of the doubleheader by scores of 4-2 and 6-0. In the first game, Matadors reliever Conner O’Neil captured the all-time saves record at the school by tossing 1.2 shutout innings, while in the second game, Rosenberg started and struck out an amazing 16, walked one and allowed just one hit in 7.2 innings.

Stuff-wise, Rosenberg, a redshirt sophomore, sat anywhere from 88-91, and up to 92 mph with his fastball, which he was able to command on both sides of the plate, while the 6-foot-1, 195-pounder, also threw an effective 78-81 mph curveball.

CSUN is quietly 5-2 overall this spring, and has a chance to surprise some people with Rosenberg, Rayne Raven and Joe Ryan, among others, leading the charge.

If there’s one thing the Longhorns have on the mound this spring, it’s options. The ‘Horns have a plethora of quality starting options, and still, pitching coach Skip Johnson decided to put pitchability senior lefthander Ty Culbreth in the weekend rotation.

That move is looking rather smart right now, as the lefty had the best performance of his career in a dominant 9-0 triumph over Stanford.

Culbreth struck out 12, didn’t walk anyone and allowed just two hits in eight shutout innings. Stuff-wise, Culbreth was anywhere from 87-89, and up to 90 mph with his fastball, while he also showed good feel and located a changeup and curveball.

Culbreth had already proven himself to be a solid reliever well before this spring, but he’s now established himself as a quality starting pitcher. That makes things even more interesting to watch when Morgan Cooper, Josh Sawyer and Nolan Kingham are ready to be inserted into the rotation.

4. Brendan McKay does it again for Louisville.

The Cardinals had a tough Friday as righthander Kyle Funkhouser scuffled on the way to a disappointing loss to Ole Miss to begin the weekend. McKay, as he did many times last season, rose to the occasion and perhaps might’ve turned the tide of the series in a 4-0 victory, where the Cards actually out-hit the Rebels 10-3.

McKay was exceptional. He struck out eight, didn’t walk anyone and allowed three hits in a complete game shutout performance, while also recording a double at the plate. 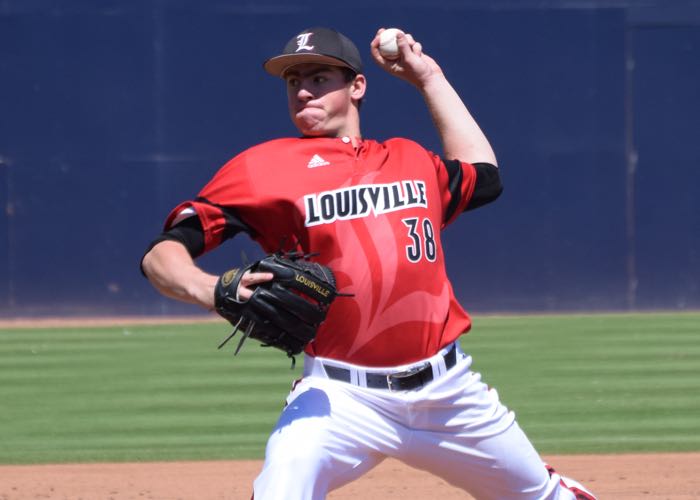 McKay is one of the nation’s elite players, and he certainly showed that Saturday.

It’s not often a team has their mettle tested the first week of the season, but the Titans, for all intents and purposes, didn’t look good last weekend in the Bay Area against Stanford. Titans head coach Rick Vanderhook went into the week looking to make some corrections, and those seemed to have paid some dividends after the Titans clinched a series win over the Hoosiers with a 3-2 victory.

Fullerton lefthander John Gavin struck out four, walked three and allowed two runs on four hits in 4.2 innings of work. Meanwhile, the bullpen did an impressive job on Saturday, with Connor Seabold striking out seven in 4.1 innings, while Chad Hockin and Brett Conine each performed at a very high level .

The Titans improved to 3-2 overall with the victory, while Indiana’s early record  leaves something to be desired.

1. Beware the sting of the Hornets

I heard some positive buzz (ahem) about the Sacramento State Hornets in the fall from scouts who had seen them and praised their talented group of veterans. So far, Sac State is proving to be a thorn in the side of the mighty Southeastern Conference. The Hornets opened the season by taking two out of three at Auburn, and Saturday they evened their series at LSU with a 5-4 win.

Kody Roberts had three hits to lead the Sacramento State offense, and the Hornets overcame a 4-3 deficit with two runs in the ninth to win. An error started the rally, but Sac State capitalized with back-to-back singles to tie the score, then went ahead for good on a sacrifice fly. Relievers Tanner Olson, Chad Perry and Tyler Beardsley combined to hold LSU scoreless for the final six innings. Sac State even fared as well as anybody ever fares against first-team preseason All-American Alex Lange, touching him for three runs on six hits over five innings of work. Sunday’s rubber game should be interesting.

The 10th-ranked Tar Heels might have the nation’s most impressive resume after two weeks, as they won their second straight series against a top-12 opponent this weekend. After traveling across country to take two of three from UCLA last week, UNC has won the first two games of its home series against No. 12 Oklahoma State this weekend. For the second straight day, UNC beat the Cowboys in walk-off fashion, as Brian Miller delivered a game-winning RBI single in the 10th. Perhaps most impressive, the Tar Heels won even after getting a poor start from J.B. Bukauskas (2.1 IP, 6 H, 5 ER), as five relievers held OSU at bay thereafter. The depth of North Carolina’s bullpen is a major asset, and it loomed large Saturday.

A big reason for our preseason optimism that South Carolina would have a bounceback season was the addition of a strong recruiting class that featured a number of talented junior-college transfers. Dom Thompson-Williams garnered the most buzz in the fall, and third baseman Jonah Bride was the big story of the spring preseason, but Gamecocks coach Chad Holbrook also predicted that John Jones would make a significant impact in the lineup. That trio forms the top third of South Carolina’s offense, and all three are off to strong starts, hitting .346 or better. But through seven games, Jones has been nothing short of unstoppable.

After going 4-for-4 with a homer and four RBIs on Friday against Penn State, Jones was at it again Saturday, going 1-for-1 with a grand slam and three runs scored. The reason he only registered one official at-bat? The Nittany Lions wanted nothing to do with him, walking him four times. That makes sense — Jones is now hitting .542 (13-for-24) with three homers and 17 RBIs on the season … but pitching around him didn’t work out so well for Penn State, either. That’s because the man hitting behind him, cleanup hitter Alex Destino, blasted a three-run homer and a grand slam of his own. South Carolina cruised to a 16-5 win to improve to 7-0 on the season. Standard caveats apply — the Gamecocks have played a very soft early schedule and have not faced any frontline pitching. But still, this offense looks transformed from last year’s punchless unit, and the juco transfers are a big reason for that.

4. The rumors of UCLA’s demise were greatly exaggerated

The Bruins played very poorly in their opening-weekend series loss to UNC, and even worse during a 10-1 midweek loss to Long Beach State. But the Bruins rebounded to take the first two games of their series this weekend at Cal Poly, and they erupted Saturday to bludgeon the Mustangs 19-0 (the most runs scored by UCLA since 2010). Some notes from UCLA sports information director Evan Kaplan: All nine UCLA starters recorded a hit, led by Scott Jarvis (5-for-5, 4 R, 3 RBI, BB), who got on base in all six plate appearances in his first collegiate start. Eric Filia (3-for-6, 2B, 3B, 4 R, 2 RBI) finished a home run short of the cycle and Brett Urabe (3-for-6, 3B, R, 4 RBI) drove in a career and team-high four runs to assist the offensive effort.

The Bruins also got a very encouraging start from Griffin Canning (7 IP, 4 H, 0 R, 1 BB, 9 K), who rebounded nicely from a shaky season debut. UCLA has some flaws, but its offense figures to be very potent this spring, and it still has plenty of arms. This team isn’t going to roll over after losing its catcher and starting the season with a bad first week.

It should be noted, by the way, that Cal Poly was playing its second game of the day. In a strange scheduling quirk, the Mustangs began Saturday with a game against Michigan, which they won 5-1.

As Eric Sorenson pointed out Saturday, New Mexico is playing some good baseball so far this year, and the Lobos clinched a quality nonconference series against Missouri Valley Conference contender Wichita State with an 8-4 win Saturday. Leadoff man Luis Gonzalez (2-for-4, 2 R, 2 RBI) led a balanced attack for UNM in support of Tyler Stevens (6.1 IP, 2 ER), as New Mexico improved to 5-1 on the season. We know the Lobos could hit — they always do — but pitching has also been a real strength for New Mexico thus far, as the staff has a cumulative 3.25 ERA.

San Diego State (1-6) looks like it’s in rebuilding mode, leaving New Mexico and Fresno State as the early teams to beat in the Mountain West, with Air Force as the darkhorse. Fresno is 7-0, having swept a good Creighton team and won the first three games of a four-game set against a not-so-good Youngstown State club.