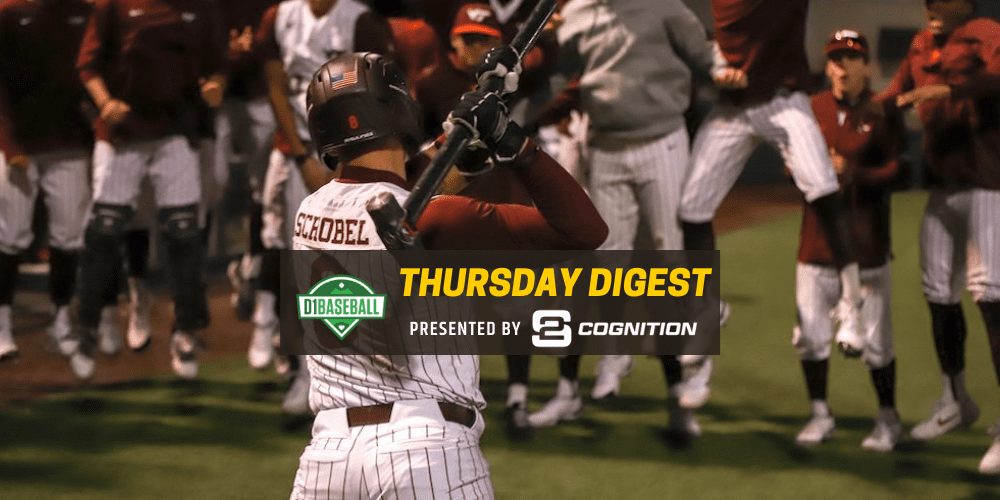 The Hurricanes entered the weekend as the nation’s hottest team with the longest winning streak, but that amazing streak is over after powerful Virginia Tech roughed up ace Carson Palmquist on the way to a 12-5 win in Blacksburg. Palmquist has been phenomenal the past few weeks. But against the hard-hitting Hokies, he looked pedestrian, allowing six runs in 3.2 innings of work. Tanner Schobel, who has already had a two-home run game recently, hit two more home runs Thursday night in the win, while Nick Biddison also hit a home run and finished the night with three hits. Cade Hunter hit a double and knocked in three runs while Gavin Cross chipped in a four-hit performance. It was a complete offensive showing for the sizzling Hokies. Now, we’ll see if they can finish off the series victory.

Sitting at 7-8 in the ACC entering Thursday’s series opener against Louisville, the Seminoles needed Parker Messick to get them off to a great start. The elite lefthanded pitcher answered the call, as he put together arguably his best performance of the season in an 8-1 win over the Cardinals. Messick was incredible, striking out 14 and allowing just five hits in 6.2 shutout innings. Messick didn’t walk a batter in the game and threw 121 pitches — 89 for strikes. Alex Toral and Jaime Ferrer led the FSU offense, each hitting home runs in the victory. Ferrer was the headliner, finishing the night with three hits and four RBIs. Fresh off back-to-back series losses, FSU looks to seal the deal on Friday.

Fresh off a home series win over Kentucky, Texas A&M is on the road this weekend looking to gain ground in the SEC standings and the RPI. Well, the Aggies might be trending the right direction once and for all. Trevor Werner returned to A&M’s offensive lineup, while sophomore righthanded pitcher Nathan Dettmer put together a career performance in an 8-1 win over No. 13 Georgia. Dettmer had a career-high nine strikeouts, while also allowing just one run (unearned) in eight innings of work. Dylan Rock finished the night with a home run and three RBIs, while Troy Claunch added a home run as well. Georgia will try to claw back and win this home series despite not having righthander Jonathan Cannon in the weekend rotation because of a muscle strain.

If you’re a fan of games where it literally sounds like the fans are on the edge of their seat with every pitch, the series opener between the Red Raiders and Horned Frogs was your game. The Red Raiders and Frogs traded blows for much of the way, with Gray Rodgers coming up big late and Luke Savage looking filthy out of the bullpen in a 7-4 TCU victory. TCU righthander Riley Cornelio did an admirable job keeping Tech’s offense at bay much of the night, striking out nine, walking two and allowing just one earned run on five hits in 6.1 innings of work. Then, the Frogs turned the game over to Savage, who struck out four in two nasty, shutout innings of work. Offensively, Rodgers and Brayden Taylor finished the night with two hits, while shortstop Tommy Sacco had yet another impressive night at the plate with a home run, two hits and a walk. TCU is amid brutal stretch from a scheduling standpoint, so finding a way to win the Tech series would be massive for this team moving forward.

You have to love college baseball. Bradley entered Thursday’s contest with a 9-17 overall record. Yet, the Braves looked like one of the better teams in the country in a dominant 10-4 win over DBU. Bradley scored seven runs the first two innings against the Patriots and never looked back. Michael Mylott had a huge night with a home run, two hits and three RBIs, while Peter Hansen also hit a home run. BU reliever Taylor Catton was the headliner on the mound, as he quelled a potent DBU offense with six strikeouts in three shutout innings out of the pen. Meanwhile, DBU righthanded pitcher Jacob Meador had an odd outing, striking out 11 but also allowing nine runs (five earned) in five innings of work. It was one of those days for Dan Heefner’s club.

The Sun Belt is having a great spring as one of the top five RPI conferences in our sport, and Georgia State and Georgia Southern are a huge part of that success and step forward. Both teams entered Thursday’s contest with RPIs in the Top 30. So, it should come as no surprise that the series opener was an absolute dandy with the home-standing Eagles scoring three runs in their final two at bats to beat Georgia State, 4-2. Southern talented lefthanded pitcher Ty Fisher struck out six, walked one and allowed two runs in 6.1 innings of work, while Jay Thompson finished out the evening with 2.2 shutout innings. As for State, it certainly didn’t lose the game because of Trey Horton. Horton struck out seven, walked one and allowed a run (unearned) on two hits in five innings. Interestingly, GSU lost the game despite the top three hitters in the lineup combining for six hits.

It’s one of the most important series in the Big West this spring, and the series opener featured a pair of ultra-talented arms in UCI lefthander Nick Pinto and Cal Poly righthander Drew Thorpe. Pinto stole the show in a dominant 7-1 UC Irvine triumph. Pinto struck out seven and allowed just a run on three hits in seven innings of work in the win, while stud reliever Gordon Ingebritson tossed two shutout frames out of the pen. As for Thorpe, he had a solid night, too, striking out nine, walking two and allowing three runs and three hits in six innings of work. On the offensive side of things, Justin Torres led the Anteaters with a huge night, going 2-for-4 with a pair of homers and three RBIs.

Remember the possum in Baton Rouge a few seasons ago? Something bizarre always happens in the LSU-Arkansas series, and it happened again Thursday in a 5-4 Hogs win over the Tigers. Arkansas righthanded pitcher Connor Noland was dialed in and phenomenal for much of the night. However, his no-hitter was broken up in the sixth inning and LSU proceeded to take the lead after four-straight hits. The Hogs, though, answered the call as well with a three-run bottom of the seventh inning. Noland finished the night with seven strikeouts, one walk and three runs allowed in six innings, while the bullpen was terrific with Brady Tygart slamming the door shut with a strikeout in two shutout innings. Eight Arkansas hitters finished the night with a hit, and Braydon Webb and Robert Moore led the way with two RBIs a piece.

9 — Did Mississippi State finally get a tide turning win?

Yeah, yeah, I know, the Bulldogs came back and won two games at home against Alabama in the ninth inning and the end result was nothing special. They didn’t seize the momentum in the following weeks. But could the way Thursday’s game ended in a 7-6 win over Auburn change things for good? We’ll find out sooner rather than later. MSU entered the bottom of the ninth down 6-5 to AU. And after a leadoff walk, Auburn appeared to get an easy double play ball for two outs. Instead, Cole Foster bobbled and kicked the ball around as he was trying to take the ball out of his glove. MSU made Auburn pay for that error, tying the game at 6-6 on a wild pitch and winning it 7-6 on a walk-off walk. Brad Cumbest hit another home run, Hunter Hines led the way with a hit and two RBIs and on the mound, Auburn righthanded closer Blake Burkhalter had an uncharacteristic outing, walking four in 1.1 innings of work. As for MSU, we’re about to find out how big this win was for this club.

The Cardinal entered the season with high acclaim, and they showed glimpses of being an elite team at the Round Rock Classic earlier this spring. However, there have admittedly been some tumultuous times for this team since that point. Fortunately for coach Dave Esquer and Co., Stanford appears to again be putting all the pieces together the past couple of weeks. Stanford continued its hot streak Friday night with a dominant 9-1 win over UCLA. On the mound, righthanded pitcher Alex Williams struck out eight, walked four and allowed just one run on two hits in five innings, while offensively, Carter Graham hit a home run, tallied two hits and knocked in four runs and freshman Braden Montgomery hit a towering home run and finished the night with three RBIs. Brock Jones, who has seen his average uptick to .272, had two hits for the Cardinal as well. This is more so the Stanford club we expected coming into the season. What an impressive start to this series.

2022 Review: 15 Assistants Who Caught My Attention

2022 Review: 15 Assistants Who Caught My Attention