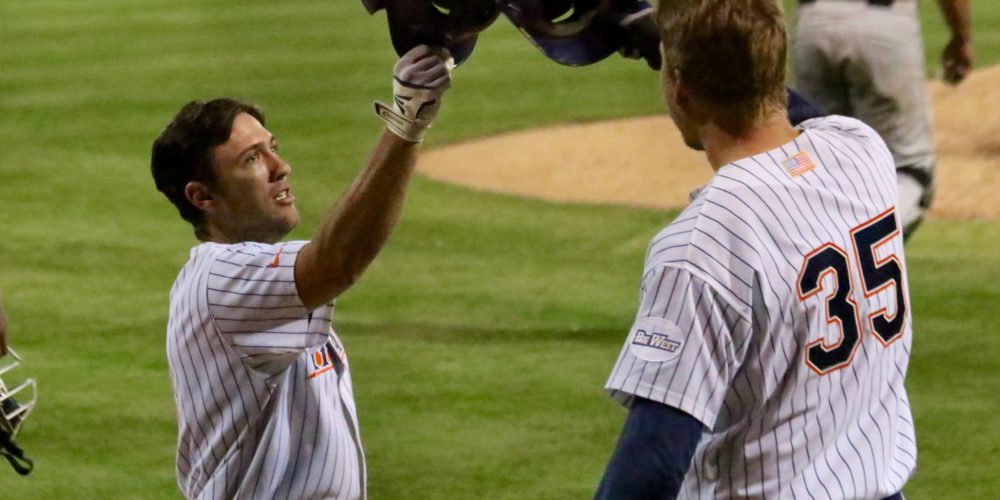 Cal State Fullerton had a strong showing against UCSB.

FULLERTON, Calif. — In danger of losing its fifth straight game in a season for only the third time in Cal State Fullerton program history, head coach Rick Vanderhook decided to change things up. But it wasn’t the lineup or pitching rotation, it was his presence in the dugout.

Upset with a 12th-inning dropped ball vs. transfer call in Thursday night’s game that helped lead to a fourth straight loss, Vanderhook challenged umpire Dwayne Finley on the rule that had been invoked the night before when he went to exchange lineups. Finley disagreed with Vanderhook’s interpretation of the rule, setting Vanderhook off on a vehement rant that got him ejected from the game…six minutes before the first pitch was thrown.

“If you know Hooky, you probably had a feeling [he might be ejected] also,” Fullerton shortstop Timmy Richards said after the Titans evened the series with a 4-2 win.

The move didn’t pay any immediate dividends as the Titans fell behind 2-0 early Friday night at Goodwin Field. Long Beach State starting pitcher Darren McCaughan took a perfect game into the fifth inning before Tanner Pinkston flared a ball into shallow left field and came around to score later in the inning when Jerrod Bravo was hit by a pitch with the bases loaded.

Pinkston proved to be a thorn in Long Beach State’s side as he singled in each of his final three at-bats and came around to score each time. He tied the score in the sixth inning on a Chris Hudgins’ RBI single and later scored an insurance run on Hudgins’ eighth inning sacrifice fly, but Timmy Richards notched the big blow earlier in the inning.

With one out, Richards attacked an 88 mph fastball from Dirtbags reliever Ty Provencher, launching the first pitch he saw approximately 411 feet to center field, just to the left of the batter’s eye, with an exit velocity of 105 mph. For the second week in a row, Richards provided the late-inning heroics after hitting a walk-off home run in extra innings against Maryland last Friday, also on the first pitch.

Richards’ blast proved to be the difference, but not without some drama in the ninth inning. For the second night in a row, Chad Hockin came on to try to close the game out with a 4-2 lead. An error and a base hit brought the go-ahead run to the plate. But Hockin got a groundout and a strikeout to end the game.

Last season, Darren McCaughan was a valuable reliever for Long Beach State, but head coach Troy Buckley didn’t know he had a solid Saturday starter in the waiting. 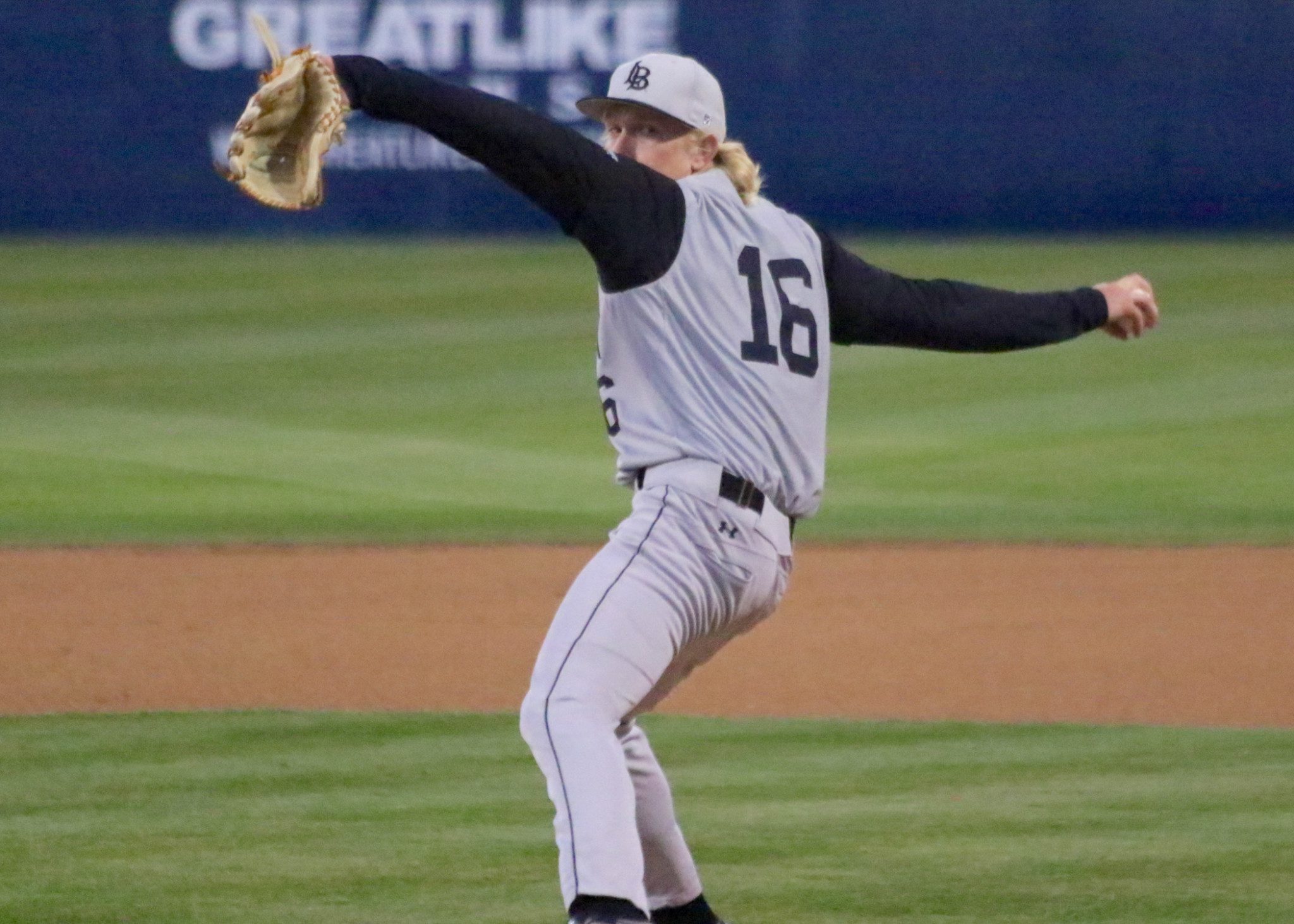 Buckley said McCaughan added around 25 pounds of muscle since the end of last season and it’s only enhanced his pitching and stabilized his mechanics. McCaughan mixed his pitches well and routinely dotted the mitt on the corners. His fastball was 87-89 early before dipping down to 85-86 in his last two innings, but everything he throws has action, allowing him to miss a lot of barrels.

“We trust him. He’s not going to light up the radar gun, but he can really, really pitch and really, really compete,” Buckley said. “It’s nice to have him on Saturday and have somebody emerge. I don’t think anyone can predict that.”

Chambers wasn’t available at the beginning of the season after being brought along slowly following some arm soreness in January. He has worked his way back to being a versatile swing reliever for the Titans. He’s capable of coming in for one batter like he did in his first appearance this season or staying in for multiple innings as he has done his last two times out.

Rather than having a set role, Chambers said he focuses on going batter-to-batter when he enters the game. That has led him to a 1.35 ERA and a .136 opponents average against through his first five appearances (6.2 innings). 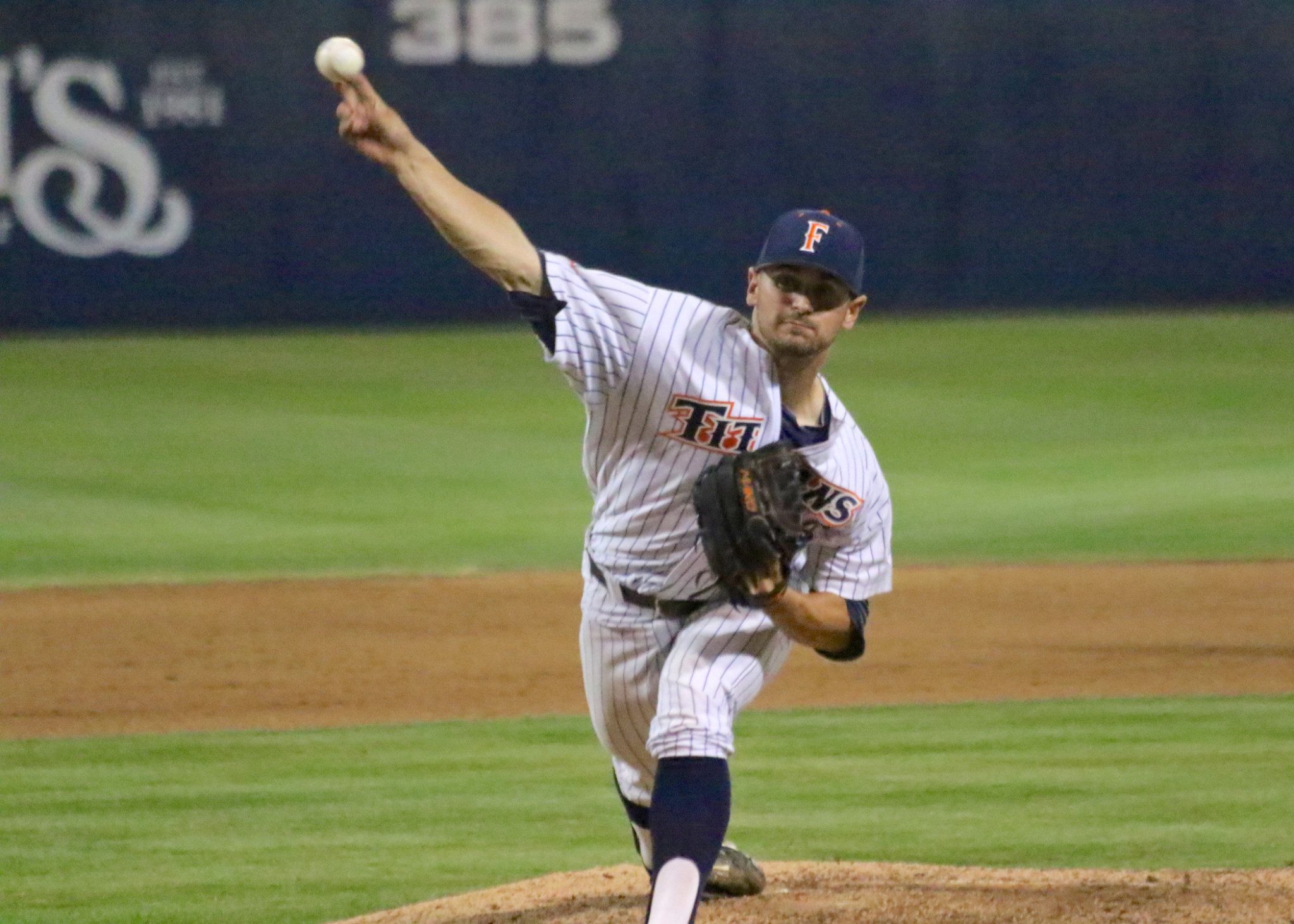 Miles Chambers picked up the win in relief. (Shotgun Spratling)

Cal State Fullerton SS Timmy Richards talks about his go-ahead home run against rival Long Beach State and being aggressive at the plate after the Dirtbags had pitched him tough all weekend.

Richards also discusses the confidence the Fullerton hitters have in the bullpen to keep them in games.:

Long Beach State head coach Troy Buckley talks about how the Long Beach State/Cal State Fullerton rivalry has changed in the past few years and how the Dirtbags have more physicality in their lineup this year. Buckley also discusses the outing of Darren McCaughan on the mound:

– Long Beach State and Cal State Fullerton are mirror teams. It’s all about pitching and defense in this rivalry, so it’s going to be up to whoever can get the timely hits. The Dirtbags have their most physical lineup since Troy Buckley took over and they have some veteran bats like Zack Domingues and David Banuelos that have really stepped up at the bottom of the lineup.

– Rick Vanderhook went with the seldom-used pregame ejection to try to motivate his players and it eventually worked out thanks to another big home run from junior shortstop Timmy Richards in the Titans’ final at-bat. If Fullerton can get big hits late in ball games, it is going to be able to win a lot of games because of the strength of the bullpen. Miles Chambers just adds to that now that he is back fully healthy.