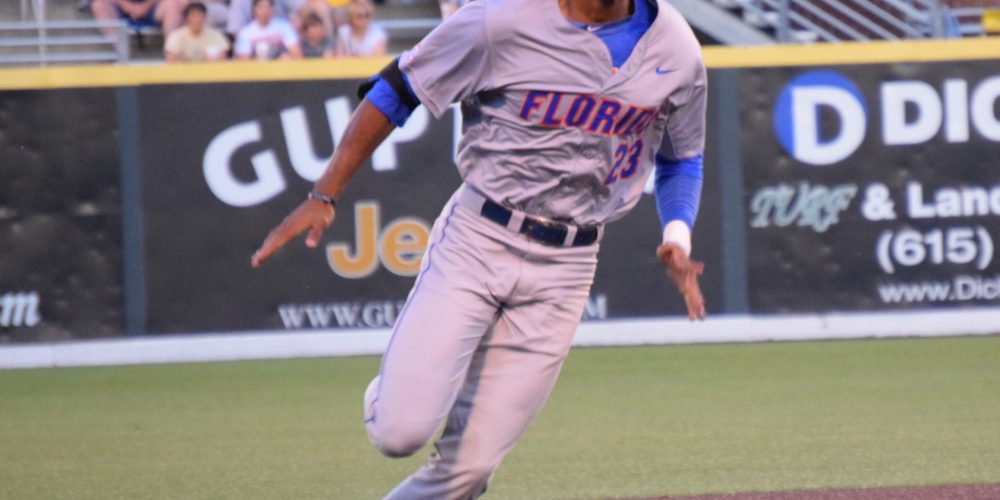 Getting To Know The Gators

The Gators must replace three key bats in leading hitter Josh Tobias, slugger Harrison Bader and first-round pick Richie Martin, but this lineup still returns many key pieces from a team that ranked 15th in the nation in scoring and 28th in batting. And it’s reasonable to expect many of the premium talents in the lineup (like Schwarz, Reed and Rivera) to be better in 2016 now that they are another year older. The switch-hitting Reed and the powerful Schwarz both played for Team USA last summer, and both have the ability to let balls travel and smack them the other way. Guthrie and blue-chip freshman Liput both have skill sets that evoke former Florida star Nolan Fontana, and they should be on-base machines who can move the ball around the diamond. The heady, athletic Larson has quietly become a very good player who also brings good situational hitting skills, and Vasquez is a gifted lefthanded hitter who should rack up doubles and can handled lefthanded pitching uncommonly well. Like Liput, India was a heralded recruit who should make an immediate impact thanks to his athleticism, feel for his barrel and strength. There are no holes in this lineup, and there is additional depth on the bench (the Gators are high on freshmen Daniel Reyes and Nelson Maldonado plus sophomore Christian Hicks).

Florida really separates itself with its ability to break games open with the long ball (its 72 homers last year ranked fifth in the nation). Schwarz has some of the best raw power in all of college baseball and knows how to use it (his 18 long balls last year ranked fourth in the nation, and many of them were moonshots). Kevin O’Sullivan calls Alonso “one of the strongest kids we’ve had — and we’ve had some strong players, obviously.” A broken foot cost Alonso 30 games last year, but expect big things from him if he can put together a full healthy season. Reed, a near-lock first-round pick, has added strength to his 6-foot-4 frame and figures to hit for more power as a junior. India provides additional pop from the right side, while Vasquez will be counted on to deliver some much-needed lefthanded power, though he’s more of a gap-to-gap hitter.

This is the one area where Florida is just average, but the Gators still have one legitimate burner in Reed, a long-strider with plus-plus speed underway. Larson, Guthrie, Liput and India are all average or slightly better runners, but the rest of the lineup is slow.

The biggest issue facing the defense is replacing the slick-fielding Martin at shortstop, but the instinctive Guthrie seized the job in the fall, during which he did not make a single error. His hands and footwork are excellent, and he has enough arm strength. India and Liput figure to start at second and third, but it remains to be season which will play second and which will play third; either way, both are athletic and polished enough to handle the spots capably. Rivera is one of the nation’s best defensive catchers, and Schwarz has come a very long way as a defender, allowing the Gators to alternate the two behind the plate to keep both fresh all the way through June. Reed might be college baseball’s best defensive center fielder, and Larson is another standout.

College baseball rotations just don’t get better than this. Florida might have as many as six players on its staff who wind up as first-round picks over the next three years. Shore has been the Friday starter since the start of his career; he has outstanding feel for his 90-94 fastball and superb changeup, and his breaking ball is serviceable. Puk has a shot to be the No. 1 overall pick thanks to his mid-90s fastball, hard slider that can be a wipeout pitch when it’s on, and the extension in his 6-foot-7 delivery that makes his ball so tough to pick up. Faedo made a jump this fall and could be a first-rounder next year; his fastball sat 92-95 and bumped 96 in the fall, his 83-86 slider flashes plus-plus with legit depth as well as power, and his changeup has continued to improve. On most staffs, Jr. RHP Dane Dunning would be the Friday starter, with a 92-96 fastball, quality slider and improved changeup. On this staff, he’s the likely midweek starter.

The only knock on the bullpen is the lack of a proven closer now that Taylor Lewis is gone. But the depth of this unit is incredible, and blue-chip freshmen Singer and Jackson Kowar give the Gators a pair of potential lights-out closers (although their futures lie in the rotation after this season). O’Sullivan said that both Singer and Kowar worked in the 92-96 range this fall, and both have heavy sink. Both flash above-average sliders and have feel for their changeups. Another tall righthander, Jr. Shaun Anderson, took a big step forward in the fall, showing a heavy 92-94 fastball and a very good breaking ball. Sophomore Scott Moss could emerge as the key option from the left side now that he’s nearly two years removed from Tommy John surgery; he touched 94 this fall with a good changeup and slider. LHP Kirby Snead is a valuable weapon against lefthanded hitters, and RHP Frank Rubio gives the bullpen some more key experience.

Florida was one win away from reaching the CWS Finals last year, so its returning core is loaded with experience on the sport’s biggest stage. The large junior class is the most talented in the nation and will face plenty of draft pressure, but fortunately the sophomore and freshman classes are similarly talented and can help shoulder the load. The Gators don’t get enough credit for their ability to recruit and develop gritty, hard-working baseball rats who know how to win like Larson, Guthrie and Liput. The bottom line is, this roster is overflowing with winning players, not just prospects. And they should be mentally tough enough to handle the extra scrutiny that comes with a preseason No. 1 ranking.