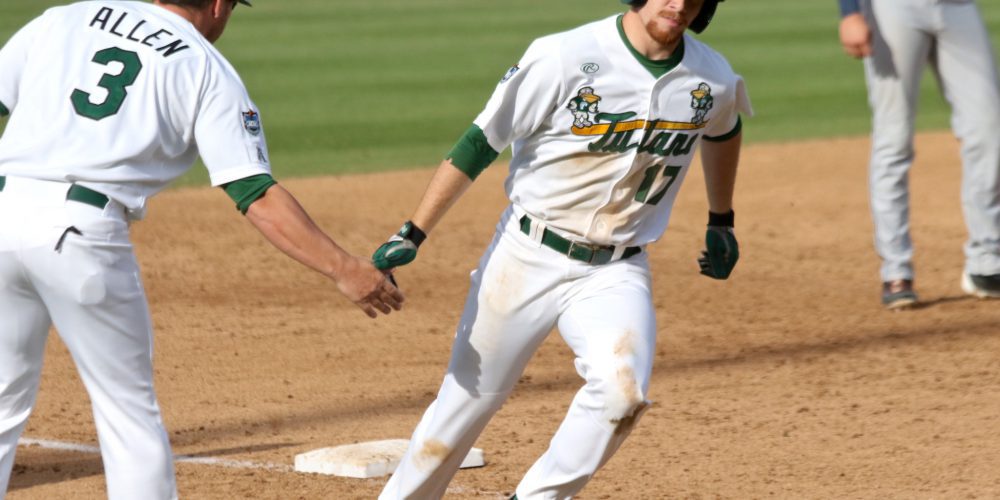 SAN DIEGO — The Tulane middle infield has a chance to be really special this season. Stephen Alemais is a preseason All-American at shortstop, and second baseman Jake Willsey seems to really be coming into his own as a junior. In a game that featured multiple All-America candidates and tons of offense, Willsey stole the show on Friday afternoon in a back-and-forth 11-10 win over Arizona to open the Tony Gwynn Classic.

He showed something new that his game didn’t have in the past — an ability to drive extra-base hits to all fields. Willsey entered the season with only seven career doubles and one triple in 87 games. He had never hit a home run, but got his first one opening weekend. He now has three career homers after collecting two homers and three total extra-base hits to different parts of the ballpark.

“During the offseason, I found my stroke a little bit. I found a little power, but what I really wanted to do was to drive it to all fields,” Willsey said. “I worked hard over the summer on my swing. I worked with some guys on swing mechanics. I trained hard in the gym with Eric Cressey. It’s just paying dividends I guess.”

After striking out in the first inning, Willsey was all over the ball the rest of the day. In the fourth inning, he hit a moonshot to right-center field that seemed like a routine fly off the bat, but kept drifting further and further until Arizona center fielder Jared Oliva was leaping at the wall to try to make a snag. The ball hit off the wall and Willsey pulled into second with an easy double.

He recaptured the lead for Tulane in the sixth inning with a line shot down the left field line that hooked just inside foul pole for a two-run homer and his biggest hit of the game came leading off the eighth inning, facing Bobby Dalbec.

“First pitch, he actually made me look pretty dumb on a slider,” Willsey said. “I was sitting dead red. He made a good pitch, but I knew he was coming back with it because if you look that bad on a slider, he’s going to come back with it. He left it up a little bit. I was just able to stay on it and drive it the other way.”

Willsey’s solo home run proved to be the difference in a wild, back-and-forth contest that featured six lead changes and moved the Green Wave to 4-1 on the season.

Here’s more observations and notes from the Tony Gwynn Classic’s opening round of games at Fowler Park:

Tulane 2B Jake Willsey talks about his career day in an 11-10 win over Arizona. Willsey hit two home runs, including a solo homer in the eighth inning to go ahead.

Arizona head coach Jay Johnson talks about Arizona’s fight in a back-and-forth game against Tulane and the struggles of preseason All-American Bobby Malbec early in the season.

Tulane head coach David Pierce talks about the battle and resiliency of his Green Wave program as well as the two-home run performance of Jake Willsey and the start of Corey Merrill.

San Diego head coach Rich Hill talks about the relief his offense provided with eight runs in the first inning and how he is mixing and matching a number of new faces during an early season trial and error period. He also talks about the Tony Gwynn Classic coming together and what it means to him..

Nebraska head coach Darin Erstad explains how his team has to flush a loss to San Diego and refocus for the rest of the weekend. Erstad also talks about what being a part of the Tony Gwynn Classic means to him.

San Diego SS Bryson Brigman talks about the Toreros bouncing back from a rough opening weekend with an offensive explosion against Nebraska and his role on the team with so many new faces.