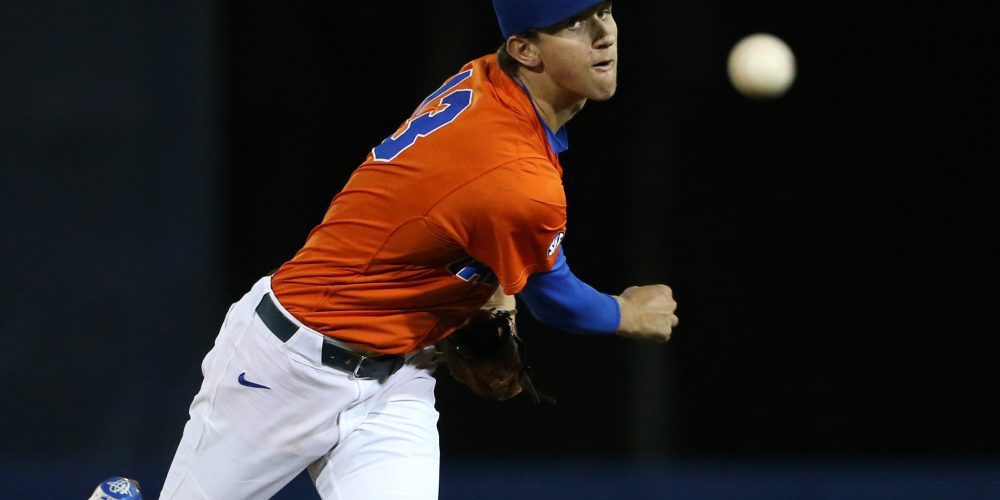 Florida’s Kowar Done For The Season

Kowar’s condition came about last weekend during the Gators’ trip to South Carolina, and he did not pitch in the rain-shortened two-game series. This isn’t the first time Kowar has had an unfortunate medical challenge to face, as, in a well-chronicled occurrence in high school, he was forced to have emergency surgery because of a collapsed lung.

Kowar, a 6-foot-5, 180-pounder, will be back in a Gators uniform in due time, but it will not be this season. He won’t be able to pitch for at least 10-12 weeks, and likely will take the summer off before returning to full strength in preparation for fall workouts at UF later this year. It should be noted that the righty was slated to play for the Harwich Mariners at the Cape Cod League this summer.

While on the mound for the Gators this season, Kowar showed explosive stuff with the ability to get up to 96-98 mph at times with his fastball, while also showcasing a quality changeup at 78-82 mph, along with a splitter at 84-86. Kowar, ranked the No. 11 freshman prospect coming into the season, made 12 appearances, six of them starts, and had a 3.38 ERA in 34.2 innings, along with 44 strikeouts and 10 walks, while teams hit him at just a .250 clip.

Granted he remains healthy moving forward, Kowar will be one of the nation’s elite prospects the next two years leading up to the 2018 Major League Baseball draft. In addition to his electric stuff right now, it’s believed he’ll continue to develop his slider, which would give him a devastating four-pitch mix.

It’s interesting to note that Kowar was a 40th-round pick to the Detroit Tigers out of high school, but clearly showed this past season that he’s worthy of high, elite praise.

For now, though, the fireballing freshman is on the shelf.