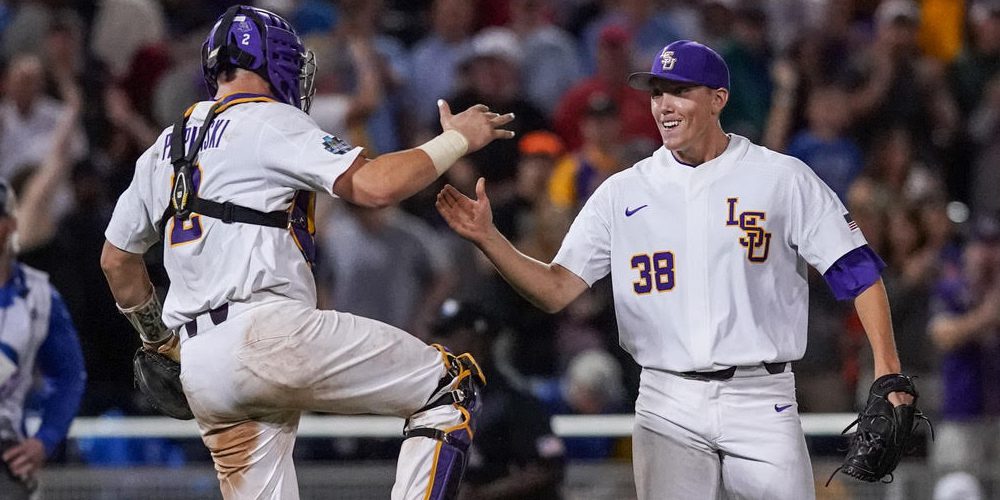 It’s hard to imagine, but another college baseball season is finally here.

It seems like it was just a few weeks ago that we stood on the field taking video and pictures as Florida celebrated its first national title. Now, the Gators take the field this weekend in defense of that title with the nation’s premier weekend rotation and a potential No. 1 overall draft pick in righthander Brady Singer. Meanwhile, down the road in DeLand, Fla., coach Steve Trimper and Stetson have a shining star of their own in righthander Logan Gilbert, who might very well challenge Singer for that top spot in June.

There are many intriguing storylines we’ll be following throughout the season as we bring you, for yet another year, the most comprehensive college baseball experience possible.

What will we be watching for this season? Without further ado …

1. The Logan Gilbert hype. After such a strong summer at the Cape Cod League, the Stetson righthander blew up to the extent that some believe he might just be the top overall pick in the MLB draft this summer. Gilbert has the body and stuff to accomplish that goal, but it’ll be fascinating to see how he handles the added pressure this spring. Thankfully, if Gilbert ever gets off track, the Hatters have an outstanding No. 2 starter in Brooks Wilson, who tallied over 100 strikeouts last season. From a sheer results standpoint, Gilbert has already proven himself, tallying a 2.02 ERA and 10-0 record last season, along with 107 strikeouts and 26 walks.

2. LSU’s starting rotation. Speaking of being fascinating, check out how the Tigers’ weekend rotation fares the next two weekends. While we’ve talked a lot about LSU’s starting trio over the past few weeks, the closer we get to game time, the more I’m thinking the Tigers might just be fine. Early reports so far this spring have been positive on righthander Zack Hess, though, admittedly, I want to see him be able to hold his velocity and make the mental transformation. You can’t be “Wild Thing” as both a closer and starting pitcher. I feel very good about LSU righty Caleb Gilbert, who is mature and has pitched in big games before, while Todd Peterson is the big question mark for me. He clearly has good stuff, but I’m skeptical he puts it all together. I also think that last line will end up on a bulletin board somewhere near his locker. Prove me wrong, Todd.

3. Oregon State’s Luke Heimlich and distractions. The Beavers were the clear-cut favorite to win the national title when the NCAA postseason began last June. Then the news surfaced: It was revealed that Heimlich had pled guilty to a sex crime as a teenager, Heimlich decided not to join his team in Omaha, and the Beavs were ousted from the CWS by LSU. Much time has passed since that point, but the cloud of the Heimlich news still somewhat hovers overhead. Heimlich was the premier pitcher in college baseball last season, and his ERA was simply absurd. But how does he handle the limelight this season, and mostly for all the wrong reasons? We’ll find out.

4. How Florida handles the championship feeling. For whatever reason, it’s often tough for teams who win the national title to come back the next year with the same fire. Perhaps you get a little complacent after hoisting the trophy in Omaha in June. South Carolina and Oregon State over the past two decades were the outliers — they overcame that bug to win back-to-back crowns, granted the Beavers likely wouldn’t have made the NCAA postseason in 2007 had former Arizona State coach Pat Murphy — a huge OSU proponent that year — not been on the committee. At any rate, UF has the nation’s premier weekend rotation and the offense should be slightly better than last season. But will the end result be the same, or at least close? It’ll be fascinating to see how Kevin O’Sullivan handles this club.

5. Miami’s Jim Morris and his final season. At an Adidas gathering at the ABCA Convention in Indianapolis last month, my colleague Aaron Fitt and myself spent about 45 minutes talking about this year’s Miami club and past Hurricanes stars with legendary coach Jim Morris. I always enjoy talking with Jim and other coaches, but this time, I was very much glued to the conversation. Why? This is the last year that Morris will be able to talk about “his team”, as he’s retiring at the end of the 2018 campaign. Morris has been a championship coach and a pioneer for our game, and his contributions to the sport won’t be forgotten. Here’s to the Hurricanes sending him out with a bang. PS: Keep an eye on righthander Gregory Veliz, who has created a ton of buzz amongst scouts after having a strong fall.

6. The new NCAA tournament seeding. For years, we’ve screamed from the mountain top that the Division I Selection Committee needed to get away from the traditional 1-8 national seeding to a 1-16 format that essentially ignores conference affiliations. For instance, Auburn can now play Alabama in a super regional with both teams being one seeds in their respective regionals. They’d just have to matchup when it comes to their seeds, such as 1 vs. 16, 2 vs. 15 and so on. Funny story, though. I had a rather lengthy conversation with San Francisco athletic director and committee chairman Scott Sidwell before last year’s College World Series practice day. Sidwell said he wanted the 1-16 seeding and wanted it now. A few months later, it became official. That’s called getting the job done. Kudos to Scott and the rest of the committee.

7. Stanford’s new era. For the past 41 years, a familiar face was present in the Cardinal dugout: Mark Marquess. You’d always know when Marquess was coming your way — you just had to look for the old school briefcase. Marquess and his trademark brief case are now retired, but a native son and familiar face is now in charge — Dave Esquer. Esquer is a Stanford man despite his lengthy tenure as the head coach at California. Esquer played shortstop for the 1987 national title team, and also had a stint as a Stanford assistant coach in the 1990s. While the Cardinal has some offensive holes to fill, they’re loaded on the mound with a trio of premier arms in the weekend rotation — Kris Bubic, Tristan Beck and Erik Miller. Beck, we’ve heard, has been outstanding over the last month with a fastball up to 95 and nasty secondary stuff. One last Esquer/Stanford nugget: The Cardinal’s traditional block “S” hat has officially been replaced by a hat with the standard school logo. As our Kyle Peterson told me: “Gotta have the tree”.

8. TCU’s quest for five-straight Omaha trips. It’s hard to reach the CWS. It’s harder than ever, actually. Just ask long-time head coaches such as LSU’s Paul Mainieri, among others. But TCU has defied the odds over the past few seasons, making a fourth-straight CWS berth last season after beating Missouri State in super regional action. But the Frogs want more. They welcome back an outstanding duo in the weekend rotation in righthander Jared Janczak and lefthander Nick Lodolo. They also welcome one of my personal favorites, righty Sean Wymer, to the weekend rotation. What a trio. The question? The offense. Hitting coach Bill Mosiello is one of the best in the business at his craft, but the Frogs definitely have some holes in this department after losing several key cogs from last year’s club. TCU will have a stiff test this weekend against righthander Jake Wong and Grand Canyon, as the Lopes open a brand new ballpark. We’ll see how the Frogs fare this weekend and beyond, as they aim for five-straight trips.

9. Florida State’s Mike Martin aims for wins record. The long-time Seminoles skipper is an absolute institution in our sport. From his engaging and fatherly personality to his incredible success on the field, Mike Martin is one of the real delights of our sport. Martin is chasing former Texas and Cal State Fullerton head coach Augie Garrido for the all-time wins record. Right now, he trails Garrido by 31 wins (with 10 fewer seasons as head coach), a mark the top-five Seminoles certainly will best barring a surprise this spring. The only thing Martin lacks at this point is a national title, something that most of us in college baseball sincerely hopes he gets before he calls it a career.

10. New eras in college baseball. One of the things we take pride in is our coaching carousel coverage, and boy, was it an active summer. The most notable coaching change came at South Carolina, where the Gamecocks parted ways with Chad Holbrook, who is now the head coach at College of Charleston. There’s never a such thing as an easy transition, but new Gamecocks skipper Mark Kingston is a consistent miracle worker and could take that program to greater heights sooner rather than later … At Alabama, a tumultuous 2017 campaign led to the dismissal of Greg Goff and addition of Auburn assistant Brad Bohannon as head coach. Bohannon has his work cut out for him in Tuscaloosa, he has an infectious personality that’ll resonate on the recruiting trail … Cal replaced Esquer with pitching guru and Pacific head coach Mike Neu. The Golden Bears should flourish in his first season … John Sfecz headed to Virginia Tech in what was a coup for Hokies athletic director Whit Babcock, while Maryland promoted fiery Rob Vaughn to head coach … Tennessee will try yet another option as head coach in former Arkansas assistant Tony Vitello, while Oklahoma ushers in a new era with the promotion of star pitching coach Skip Johnson. Johnson ascended to the lead role at OU after a nasty split with OU athletic director Joe Castiglione and former Sooners head coach Pete Hughes … Last but certainly not least, watch out for Kerrick Jackson at Southern. He takes over for Roger Cador, another college baseball legend. Jackson is another coach with an infectious personality who made a previous stop at Missouri. It wouldn’t shock me to see the Jaguars start making up ground soon.