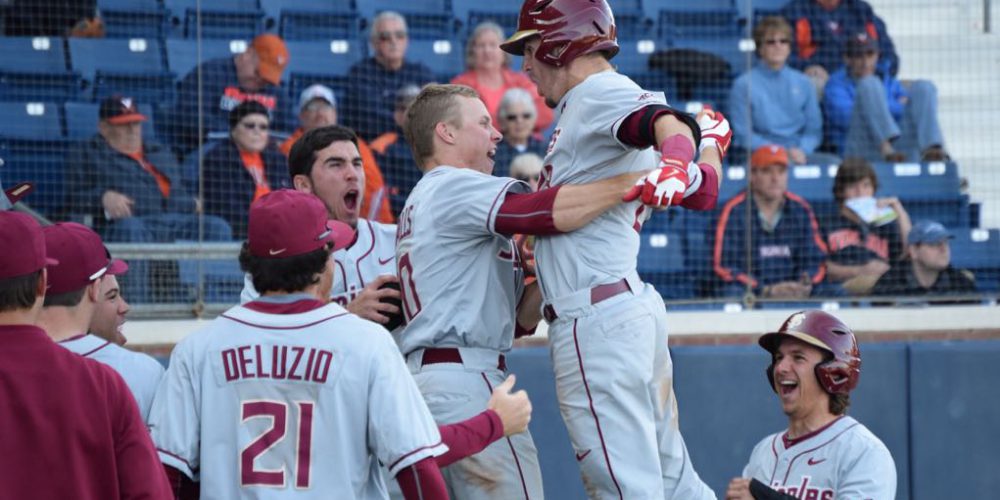 CHARLOTTESVILLE, Va. — The first thing Florida State coach Mike Martin said after emerging from the dugout following Saturday’s ugly 12-10 win against Virginia was, “Well, I think we set the game back with that one.”

It was a long, ugly game that featured a combined 21 walks, three hit batsmen, three errors and 13 pitchers. It was not the kind of well-played contest we’ve come to expect from UVa. and FSU, two of the nation’s best programs year in and year out. But it did provide plenty of twists and turns that led to late-innings drama. And it showcased some of Florida State’s great strengths, as well as its weaknesses.

“It was a crazy game, but it was a very good win for us, because this place has been very difficult for us,” Martin said. “It’s a credit to our young men showing great poise, discipline, although some of the poise, you had to be a little surprised at. But from a position players’ standpoint, we played pretty doggone good.” 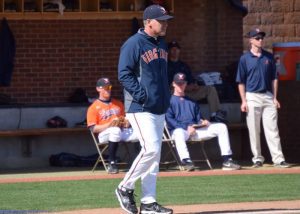 On Friday, Virginia pitching coach Karl Kuhn said repeatedly that Florida State is a very tough team to pitch against, because they are so disciplined offensively. That is a hallmark of this program every single year, of course — the Seminoles are always among the national leaders in walks, and they grind pitchers down better than anyone. On Saturday, FSU drew 12 walks against the ACC’s best pitching staff, including six against starter Connor Jones — who carried a no-hitter and a 2-0 lead into the fifth inning before his control deserted him. Three walks and a hit batsman led to Florida State’s first run, and then John Sansone put the Seminoles ahead with a grand slam to left on a hanging Jones slider. But the ’Noles weren’t done — they drew two more walks after the homer, leading to another run.

It was the first of several wild momentum shifts Saturday. The Seminoles tacked on two more in the sixth on D.J. Stewart’s two-run single up the middle — after a leadoff walk and a hit batsman got the inning started.

“We focus on 27 outs every single time, so if we have another at-bat, you’re going to have to go up there and really beat us to get us to lose,” said Stewart, who walked two more times Saturday to give him 32 in 24 games this season. “We really pride ourselves on making them get us out 27 times, so we went up there with that philosophy.” 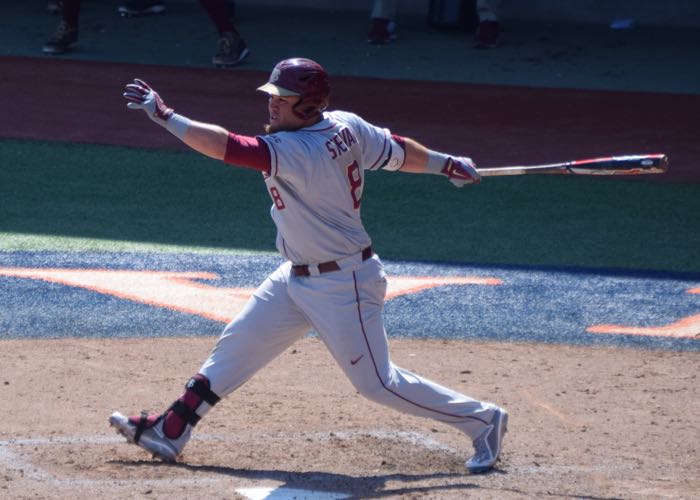 FSU carried an 8-3 lead into the seventh, when its own bullpen struggled to find the strike zone. An error, four walks and two singles led to five runs for the Cavaliers, and suddenly the game was tied 8-1.

Then another momentum shift in the top of the eighth: With two outs and the bases empty, Stewart got ahead in the count 3-1, then crushed an elevated fastball over the bleachers in right field for his eighth homer of the season. The Seminoles were back on top 9-8.

It didn’t last. Virginia answered with two runs in the bottom of the eighth — with help from the third error of the game by the FSU infield — to take a 10-9 lead into the ninth.

“It was like a rollercoaster going back and forth, it was awesome,” Florida State freshman John Sansone said. “Great game to be a part of.”

UVa. summoned closer Josh Sborz for the ninth, and he started the frame off by issuing a leadoff walk to freshman Darren Miller (a defensive replacement for Quincy Nieporte). And Florida State is very good at making opponents pay for free bases.

The next hitter, fellow freshman Busby, jumped on a hanging Sborz slider and hooked it toward the left-field corner. It just cleared the fence for a go-ahead two-run homer, electrifying the FSU dugout. Busby didn’t think it had enough to get over the wall. 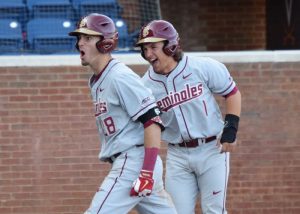 “No. No chance. I was trying to hit the ball hard the opposite way, and cutter in, and I hit it pretty good,” Busby said. “Luckily it went out.”

Senior Danny De La Calle followed with Florida State’s fourth homer of the game — a mammoth blast over the left-field bleachers — to give FSU some breathing room, and closer Dylan Silva escaped a two-on jam in the ninth to end it.

The game illustrated Florida State’s patience, but that’s nothing new. It also showed off FSU’s power potential, which has been bolstered by the additions of Busby and transfers Chris Marconcini and Nieporte. That combination of plate discipline and thump makes this offense very formidable.

“We’ve got a little more power than I or anybody else thought we had,” Martin said. “We’ve got about three or four guys that can do damage.”

But the game also exposed two of FSU’s shortcomings. The infield defense is a significant concern. FSU is fielding just .955 as a team. The Seminoles made five errors in a midweek loss to Florida, then one very costly error in Friday’s loss to UVa., before making three more Saturday. Freshmen Busby and shortstop Taylor Walls have the tools to be good defenders on the left side of the infield, but they have struggled with consistency early on, and Sansone has too at second.

“We haven’t played good defense, but it’s still early,” Martin said. “We can’t get real excited, it was just a great win for us today. We can’t do anything but be ready to play tomorrow.”

The pitching staff remains a work in progress and has a shortage of shut-down power arms. FSU has plenty of lefties in the bullpen — it used five of them Saturday, but Silva is the only one with anything resembling power stuff. Of course, strike-throwing was the big issue Saturday (the Seminoles issued nine walks and hit a batter). But Martin said he is not overly concerned about his staff.

“It’s a great question, and a very valid question, but I do not have any reservations to trot anybody out there that’s pitched thus far,” he said. “It was just one of those games.”

Let’s hope Sunday is a different kind of game — for Virginia’s sake, for Florida State’s sake, and for all of our sake. For Pete’s sake — just throw strikes.