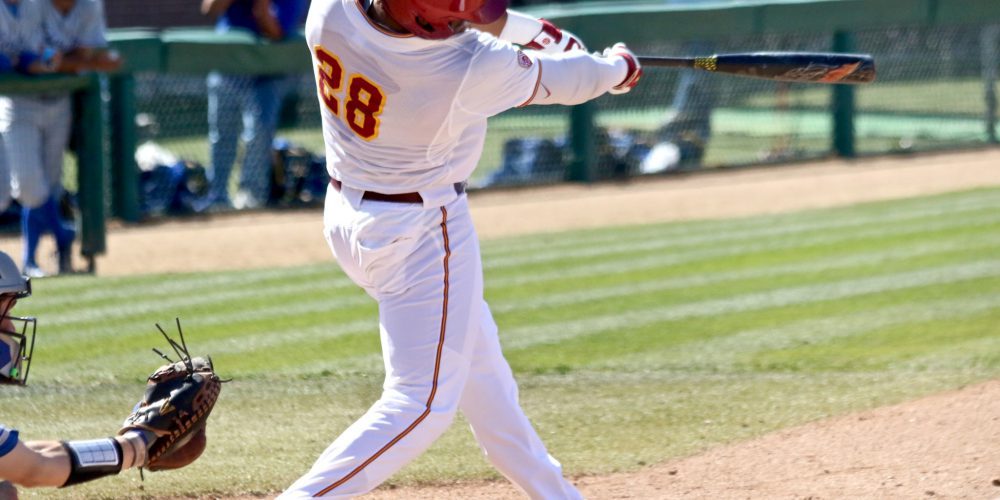 LOS ANGELES — Assured of their fourth losing weekend after dropping a pair of games at UC Santa Barbara, the USC seniors called a players-only meeting.

“Players just got to voice their opinions of what we need to work on,” senior outfielder Timmy Robinson said. “We got a lot out of it, but all these meetings mean nothing if we don’t consistently show it with our actions.”

The Trojans did just that Saturday afternoon at Dedeaux Field, salvaging the series and getting back to .500 on the season with a 9-5 win over the Gauchos (18-4).

Robinson provided the power, crushing a pair of home runs and driving in five runs on the day while Joe Navilhon picked up his first win as a Trojan in his second start. After falling behind 2-0, USC got on the board on an RBI bunt single by David Edson in the third inning and took the lead two batters later when Robinson turned on a 2-0 high fastball. He stayed on top of the ball and sent a laser halfway up the screen behind the left field fence for a three-run homer.

Check out @timmyrobinson4's 3-run home run that gave the Trojans a 4-2 lead in the 3rd inning! #FightOn https://t.co/gDQtmqv6wy

USC went up 6-2 in the fifth inning when Robinson added a second moon shot to left field, this one a solo shot.

This BOMB is @timmyrobinson4's 2nd home run of the day! It makes the score 6-2 Trojans! #FightOn https://t.co/YWrEb1cy1f

The Trojans tacked on three more runs in the sixth inning, getting a two-run double from Jeremy Martinez and a sacrifice fly to the warning track from Robinson as he flirted with a hat trick.

UC Santa Barbara did cut into the lead behind Andrew Calica. Calica, who doubled and scored in the first, drove in two in the seventh ining with a triple off the center field wall and bounced one over the wall in the same spot in the ninth inning for a ground-rule RBI double. But Bernardo Flores and Brooks Kriske closed things out for the Trojans to push them back to .500 at 11-11.

“I think today was a step in the right direction and we’ve just got to stay with the process and keep things going and not look at the results and get caught up in that,” Robinson said.

Three hours after the conclusion of Saturday’s game, all the coaches had departed and the field was beginning to darken as the sun set. The players were long gone as well except for one.

Starting pitcher Joe Navilon was jogging laps around the field. He had already gone into the batting cages and lifted weights. He had already done an initial review of the tape from his outing.

Navilhon never envisioned being in the USC weekend rotation. This wasn’t how things were supposed to play out. He committed to and played at Cal State Fullerton his freshman year, pitching 4.2 innings in five appearnces before needing Tommy John surgery in the offseason and transferring to a junior college.

He rehabbed his elbow and then set out to play for Chabot College. But to play at Chabot, Navilhon had to routinely make an hour commute each way from his home. He put up quality numbers and earned a shot at USC, but the Trojans didn’t have any expectations for him when he signed.

He has a chip on his shoulder and that drives him to try to outwork those around him. This is his second chance and he’s trying to make the most of it.

“Every time I get my name called, I try to just stay ready for the opportunity. Come in and throw strikes. That’s really the name of the game as a staff.” 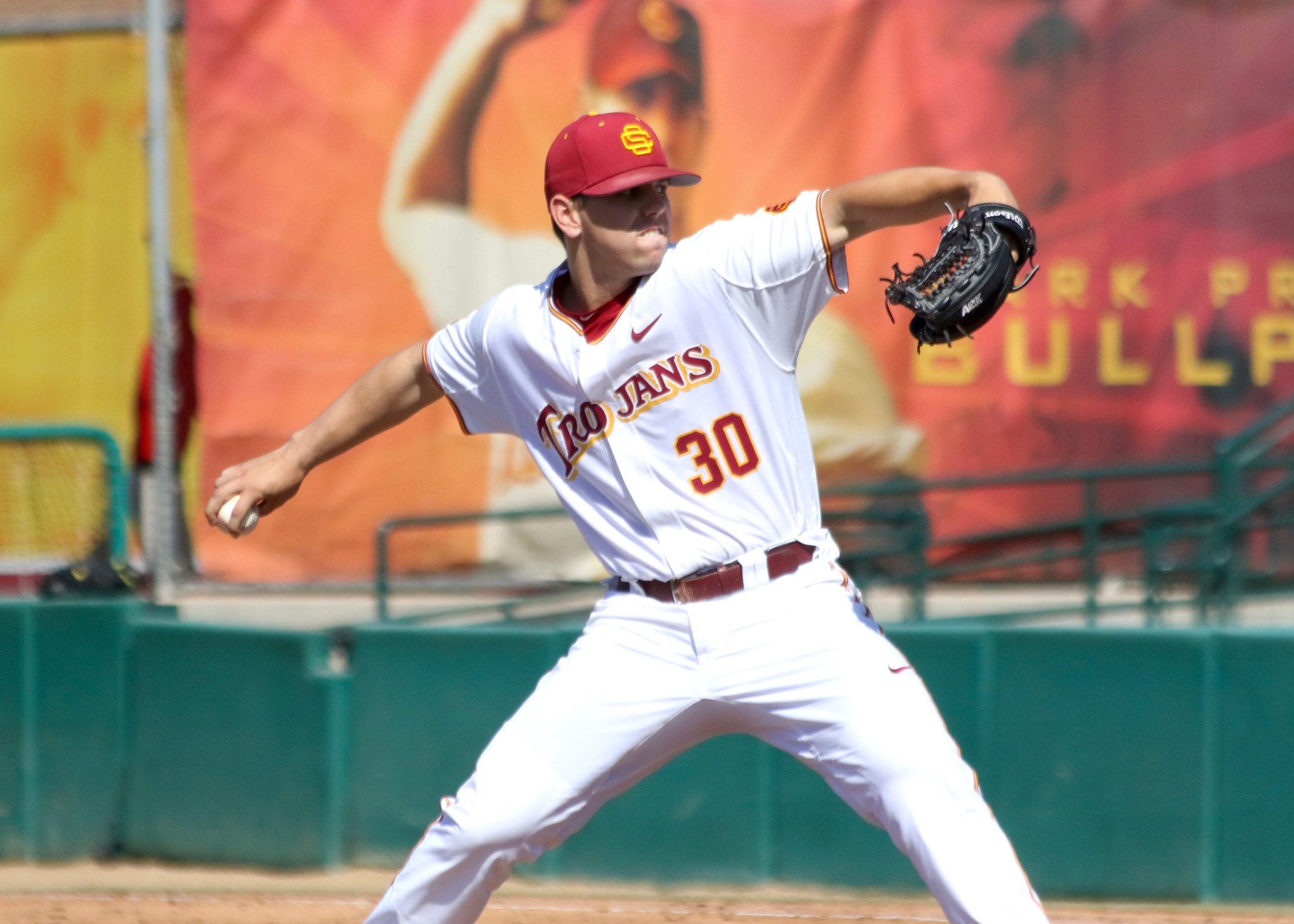 Navilhon was solid on Saturday, allowing just two runs on five hits and a walk through the first six innings. He worked at 90-92 mph early on and mixed in a changeup at 81-83 to go along with a breaking ball in the mid-70s. With USC holding a 9-2 lead, head coach Dan Hubbs ran him back out on the mound for the seventh inning, wanting to see how Navilhon would do as his pitch count increased. The results weren’t overly impressive as he left the ball up in the zone and UC Santa Barbara was able to hit a single and a double around a fly out.

“When he’s down, he’s really good…and with three pitches,” Hubbs said. “I thought he did a good job of minimizing damage.”

While Navilhon had got out of some jams early, he left two runners on who both came around to score, giving him a final line of 6.1 innings, seven hits and four earned runs. It isn’t the prettiest of lines, but it’s a game Navilhon will definitely remember. The 6.1 innings represented the longest outing of his college career and he earned his first Division I win.

“[There’s been] a lot of hard work. A lot of time put into this,” Navilhon said. “I just wanted to give my team a chance to win.”

UC Santa Barbara was primed to break through for a big inning after Billy Fredrick’s RBI single made it 2-0 and put runners on the corners with no outs. USC was in trouble of falling into a deep hole, coming off a pair of road losses.

Facing Josh Adams, the Gauchos’ No. 3 hitter, Joe Navilhon left up a hittable pitch and Adams hit a liner back up the middle. But USC had him played perfectly. Assistant coach Gabe Alvarez had shifted shortstop Reggie Southall toward second base against the left-handed hitting Adams. Southall made a good read on Adams’ rope and snagged it out of the air. He fired to first to cut down Fredrick for a double play.

Rather than a 3-0 deficit and cleanup hitter Austin Bush coming to the plate with no outs, Navilhon got a little defensive help and got Bush to ground out to end the threat and keep the game close. In the bottom half of the inning, Robinson put the Trojans ahead with his first blast.

USC OF Timmy Robinson talks about his big two-homer performance in the series finale against UC Santa Barbara and the team’s seniors calling a team meeting before the game.

UC Santa Barbara head coach Andrew Checkouts talks about the Gauchos’ series win over USC despite losing the finale and how UCSB has been able to get off to such a great start despite losing several key contributors in 2015:

USC RHP Joe Navilhon talks about his long journey to his first Division I win four years after he graduated from high school and about USC’s series-salvaging win over UC Santa Barbara:

– UC Santa Barbara is off to an incredible start, losing just its fourth game this season — a season with tempered expectations after the Gauchos lost several key pieces, including three of their top four pitchers and seven of their everyday starters, off their regional host squad last year. Having Andrew Calica hitting the ball solid consistently will make their lineup even more dangerous.

– The team meeting seemed to help spark the Trojans on Saturday, but they need more than just one win if they want to live up to the high expectations they’ve set for themselves this season. Getting healthy on the mound would definitely help. USC young guns Mitch Hart and Marrick Crouse still haven’t seen the mound yet this season, but could see April returns while ace Kyle Davis was skipped in the rotation this weekend with soreness. If Dan Hubbs gets his starters back, it could be like a midseason free agent pickup and his bullpen would become even deeper as Brad Wegman and Joe Navilhon could be shifted back to relief roles.