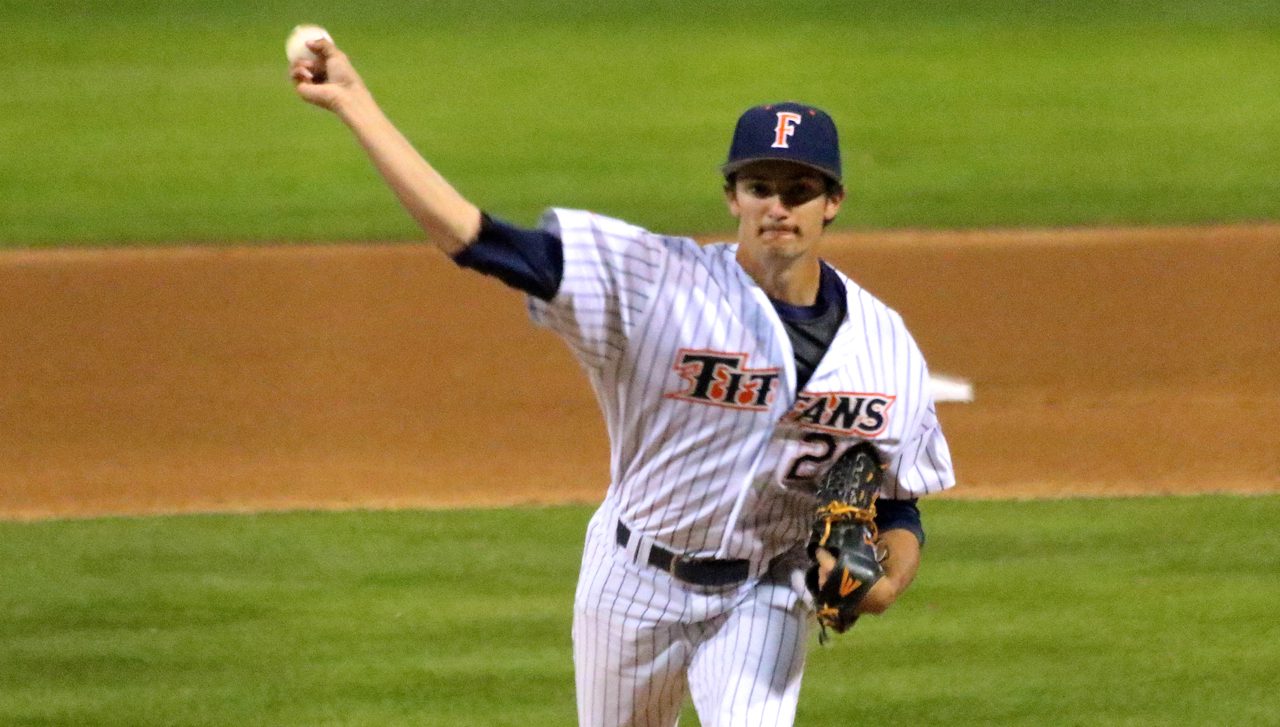 FULLERTON, Calif. — After Connor Seabold struck out the side in the top of the first inning, Cal State Fullerton leadoff hitter Josh Vargas turned on high fastball and crushed it. The ball sailed over the right field fence, planting firmly into one of the advertisements on the netting beyond the wall.

The game should have been stopped there and saved everyone the next two hours of their Saturday night because a 3-0 lead after the first inning was more than enough for the Fullerton pitching staff. Seabold, Dylan Prohoroff and Chad Hockin combined for a 100-pitch, 77-strike, one-hit shutout of Wichita State (4-10) in two hours, 19 minutes.

Seabold took a no-hitter into the sixth inning before Tanner Kirk hit a solid single through the left side for the Shockers’ only hit of the night.

“He was really good. He pounded the fastball on both sides of the plate. Fastball in and out. We struggled to put the ball in play,” Wichita State coach Todd Butler said. “Then the guys that came in after him were throwing the ball even harder with very good stuff. Their pitching staff looks to me like an Omaha staff again for Cal State Fullerton.”

Whether there would be a no-hitter was the night’s only drama as Fullerton (8-6) added a run in the second inning on a Coby Kauhaahaa RBI single and one in the fifth inning when Wichita State couldn’t complete a double play with the bases loaded. The Shockers only got one runner into scoring position on the night.

Connor Seabold made 11 starts last season as a freshman, stepping into the weekend rotation as the Saturday starter after Justin Garza went down with a season-ending elbow injury. He was primed to be a big contributor for Cal State Fullerton in 2016, but had a rough offseason.

Seabold was pitching great during the fall but took a hard liner off the forearm. Shortly after, he developed bronchitis and had to be shut down, losing two weeks of throwing. He had to basically reset his throwing program and build back up his stamina. He was used out of the bullpen the first three weeks of the season, allowing two runs in 10.1 innings in three middle-relief appearances.

Combined with the struggles of previous Saturday starter John Gavin, Seabold’s strong relief outings earned him the weekend rotation spot back. Against Wichita State, he made his first start and was lights out, spotting up an 88-91 mph fastball and a 76-79 mph curveball on both sides of the plate. 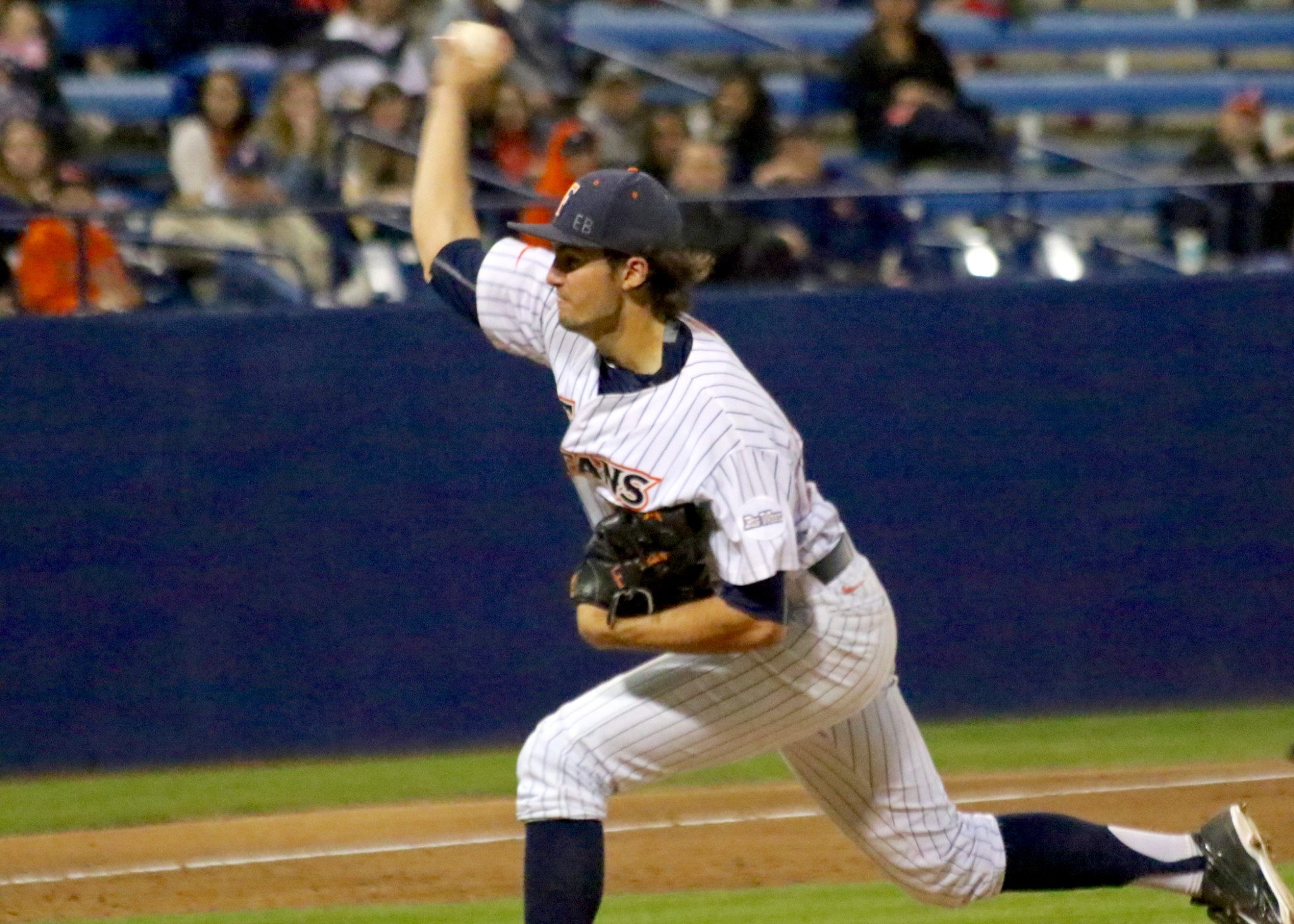 “I didn’t try to do too much,” Seabold said. “I was just trying to throw strikes. I had a good fastball/curveball mix tonight. It was effective and I was just pounding the zone.”

Seabold took a no-hitter into the sixth inning when he left a pitch up to Tanner Kirk. Seabold said he knew as soon as he released it, the no-no was in trouble.

“[The no-hitter] was in the back of my mind,” Seabold said. “The second that ball came out of my hand, I was like ‘Oh geez.’ But it wasn’t that big of a deal. We were winning 5-0. All I needed to do was keep my team in it. They did a great job of getting runs tonight and I just did my job keeping them off the board.”

Tanner Kirk has to wear and extra extension on his helmet to protect his jaw after twice taking shots to the face in the last year, but that hasn’t slowed down the senior this year.

Head coach Todd Butler said the Wichita State second baseman is “one of the toughest players I’ve ever encountered as a coach.” Kirk is a blue collar-type player that “comes to the park every day ready to play” and “brings his lunch pail.” 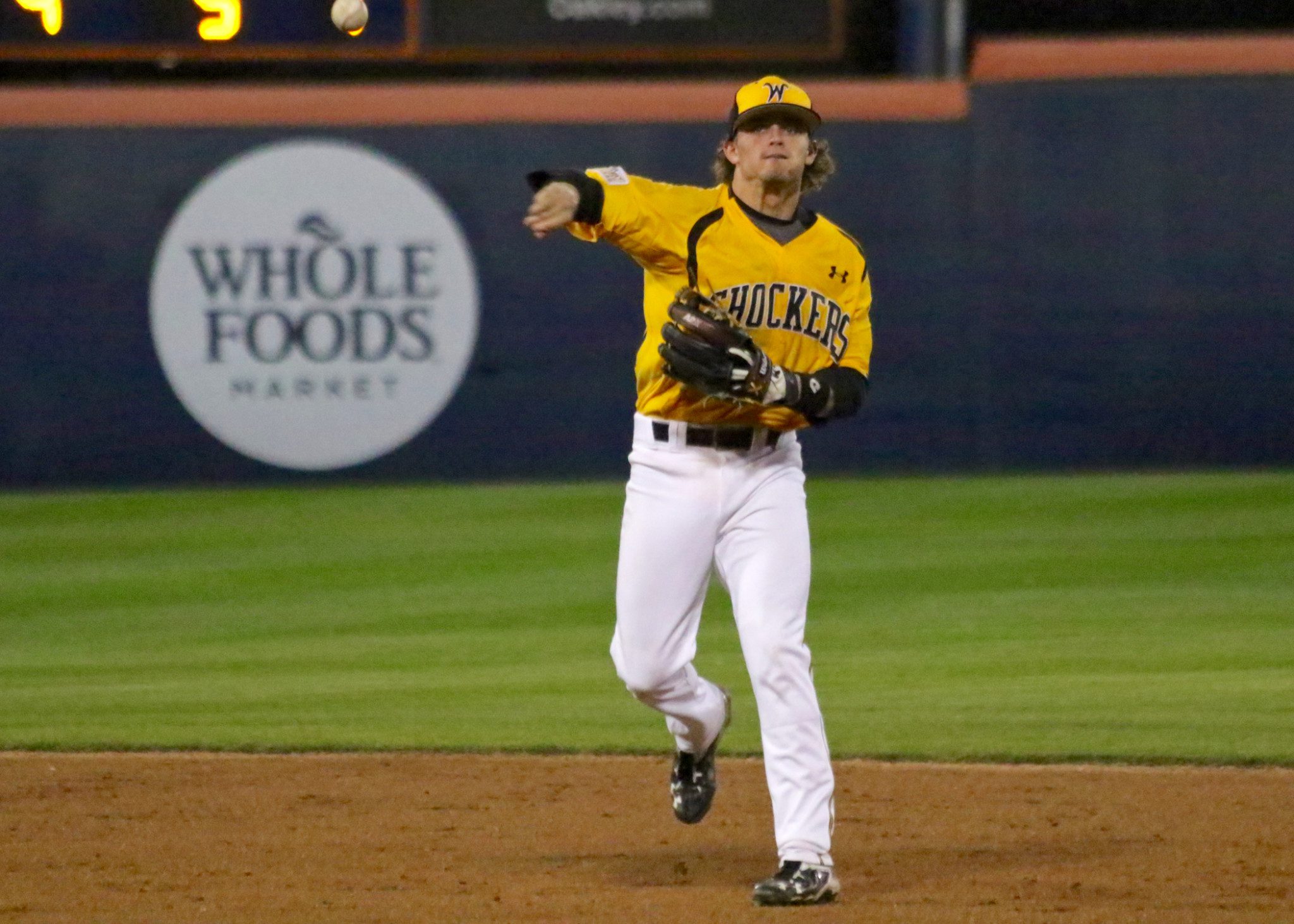 Kirk has been the Shockers’ most consistent hitter this season, batting .375 with a .468 on-base percentage from the leadoff spot. And it was Kirk Saturday night that was able to break up Connor Seabold’s no-hitter with a hard-hit ball through the left side of the infield.

There weren’t a lot of great swings from the Shockers, so if Kirk hadn’t changed the game, the Titans might still be celebrating more than just a win.

Cal State Fullerton RHP Connor Seabold talks about his six-inning outing against Wichita State, in which he took a no-hitter into the sixth inning. Seabold also discusses his progress from a fall injury and illness that set him back heading into the season:

Cal State Fullerton head coach Rick Vanderhook talks about the impressive effort of sophomore RHP Connor Seabold (6 IP, H) in his first start of the season. Vanderhook also discusses the Titans offense getting going with Josh Vargas snapping out of a slump with a leadoff homer:

– Wichita State is a team playing with a lack of confidence. Todd Butler thinks a win could change that around in a hurry, but there aren’t too many gimme’s on the schedule. After North Dakota visits Wichita on Tuesday, the Shockers travel to Nebraska for a weekend set and then settle in for a 10-game homestand against Oklahoma State, Cal Poly, Stephen F. Austin, TCU and Oral Roberts. Butler said the schedule will prepare the Shockers for conference play, but will the team have any confidence by the time it prepares to challenge against Missouri State and Dallas Baptist in the Missouri Valley Conference?

– The Titans are showing what they are capable of doing if they get just a little offense. If the bats can produce four runs, Rick Vanderhook is definitely going to take his chances with the depth of his pitching staff. Saturday night, Vanderhook backed up Connor Seabold’s 88-91 mph fastball and six innings of one-hit ball with three innings of 92-95 from Dylan Prohoroff and Chad Hockin. Both, who have been up to 97 mph on previous occasions, bring electric arms that should lock down most every game in which Fullerton holds a lead heading into the late innings.