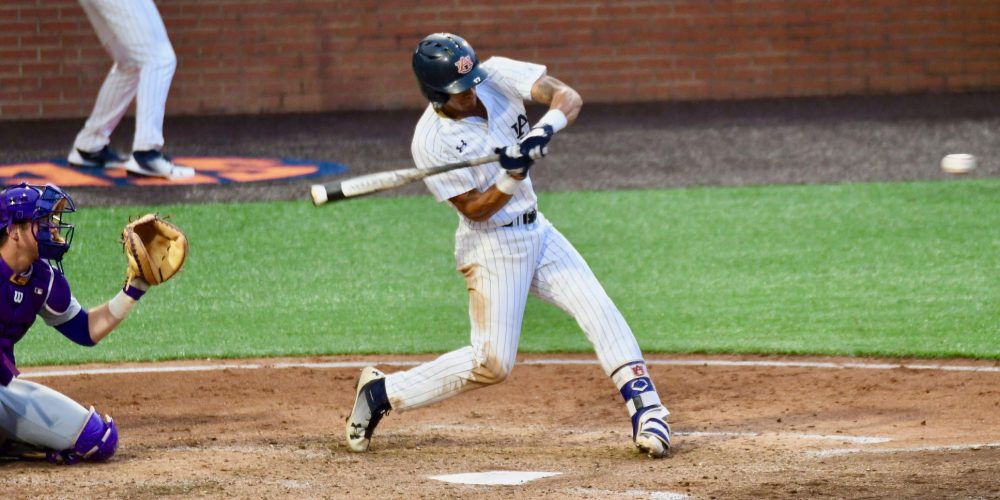 Auburn Bounces Back In Big Way

AUBURN, Ala. — Auburn was riding high heading into last weekend, coming off a sweep of Vanderbilt and then a midweek win against South Alabama. The Tigers appeared to be gaining momentum and closing in on a home regional — and then they were outscored 23-10 in a three-game sweep at the hands of Ole Miss, and they followed it up with a dispiriting 9-5 midweek loss to Troy. Most troublingly, the Tigers were suddenly turning in too many noncompetitive at-bats — they struck out 48 times in those four straight losses, and coach Butch Thompson read his team the riot act after the loss to Troy.

“Whenever you kind of call out your team, you wonder how they’re gonna respond,” Thompson said. “We had a great practice (Wednesday).”

And then on Thursday, Auburn showed up at Plainsman Park ready to play. It seemed like a critical moment for Auburn, coming off that rough patch and taking on an LSU team playing for its postseason life. And AU sure answered Thompson’s challenge emphatically, bludgeoning Zack Hess and LSU in a big 11-4 win that evened up Auburn’s SEC record at 14-14.

There were many reasons for encouragement on the Auburn side. Freshman Tanner Burns started on short rest after lasting just 1.2 innings Sunday at Ole Miss and turned in a quality outing for Auburn, before handing the ball off to fellow freshman standout Cody Greenhill for three scoreless innings of relief. Auburn made a number of standout defensive plays — especially on the right side of the infield, where Luke Jarvis and Josh Anthony put on a clinic — and overcame two defensive mistakes in the LSU fifth.

And perhaps most encouragingly, the quality of Auburn’s at-bats up and down the lineup was very impressive against a pitcher with high-end swing-and-miss stuff. AU jumped out to a 5-0 lead through two innings and rapped out 12 hits overall, led by leadoff man Will Holland’s huge day: 4-for-5 with two doubles, two RBI singles and a walk.