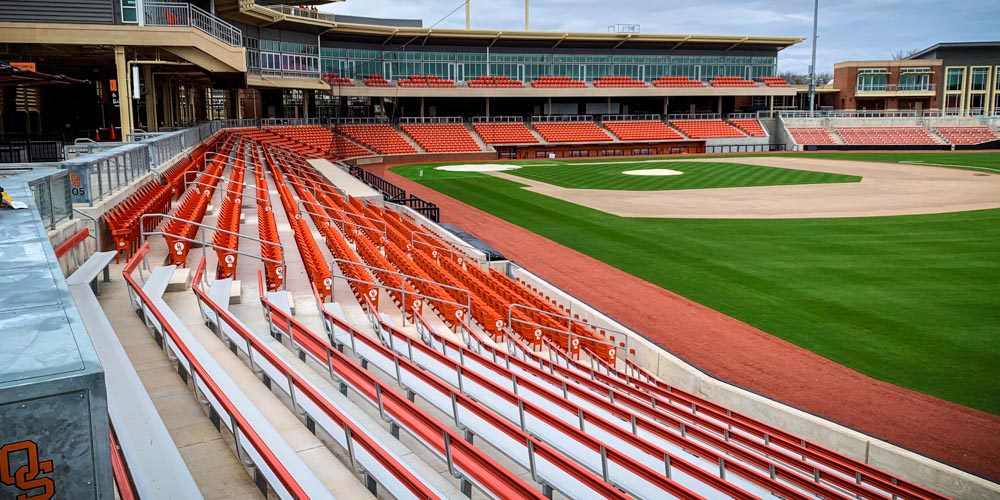 O'Brate Stadium is ready for its close-up. Whenever that comes.

STILLWATER, Okla. — The old guard was still there, serving as a reminder of a particularly brilliant past. Shrouded in clouds on this particular day and dusty from 39 years of use, Allie P. Reynolds Stadium has more than served its purpose for the Cowboys program. Sixteen first team All Americans were showcased there. Names like Ventura, Incaviglia and Beanblossom plied their wares on that dirt and grass encased by concrete and metal stands.

But on this cold and windy Friday in March of 2020, the new cozy environs, known as O’Brate Stadium, all wrapped up in a fresh bow and with that new car smell, was saying it was ready for its closeup, Mr. DeMille. Yet as fate would have it the new home sat mostly silent, save for the occasional construction worker doing some last minute measuring, sizing, sawing, pounding, wiring or cleaning.

This “opening day” saw no roaring home crowd. No gleaming smiles from players geeked to be playing in it. No fireworks show after the first game was done. Win or lose, in those nine innings against TCU the entire Cowboy program was still going to be the overwhelming winner. But alas, it was another victim of a pandemic virus that won’t allow the remainder of this baseball season to take place.

A pano image from the awning above the grandstand.

Too bad, too. This O’Brate Stadium was ready to be given its glorious coming out party. While Allie P. Reynolds Stadium was a little bit dated and a lot more antiquated, O’Brate is a quantum leap to another level. Like going from a K-car to a Tesla.

This is one brilliant joint. No expense was held back, everything about that new stadium was done in first class fashion. And of course, that’s just what $75 million will do. After the digging first started nearly two years ago, what the Cowboys have in front of them is a palace that has 3,500 permanent seats, 11 suites, 400 premium seats in dedicated club and suite areas and capacity that can be expanded to 8,000 fans.

Check out the full feature below and support D1Baseball by subscribing!