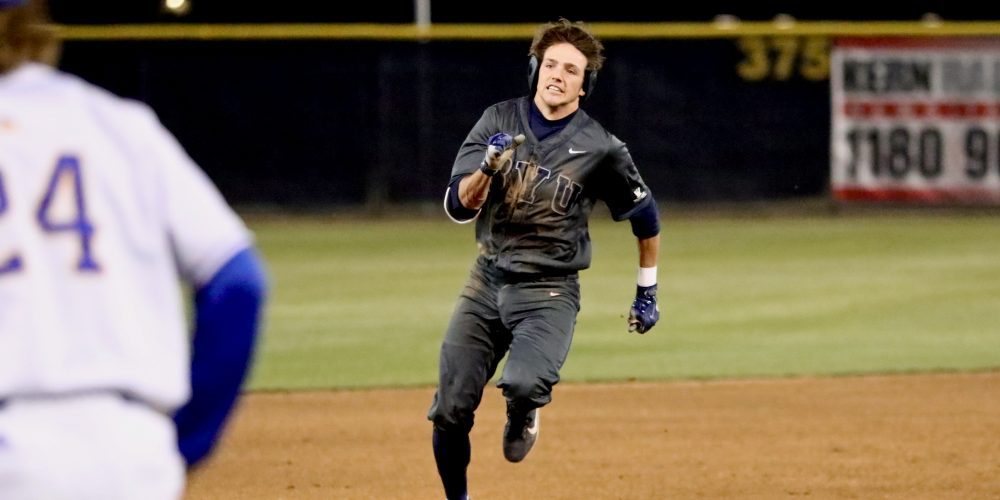 BAKERSFIELD, Calif. — Entering Friday night, Cal State Bakersfield and BYU were two teams headed in opposite directions through the first two and a half weeks of the season.

On Friday, the tides swung at Hardt Field. BYU defeated the Roadrunners, 10-2, in what BYU head coach Mike Littlewood deemed a “must-win” game.

BYU bashed the ball around, hitting three extra-base hits and scoring 10 runs with the first six all coming with two outs. Bakersfield looked lost defensively and couldn’t get the big hits when it had opportunities early, including not putting a ball in play and coming away empty on a bases loaded situation in the first inning.

“Really pleased,” Littlewood said. “We pitched, we played defense and we got timely hitting.”

The Cougars scored single runs in three of the first four innings, but didn’t fully capitalize on its opportunities, leaving runners on base each inning. Bakersfield got on the board when Mark Pena beat out an infield chopper behind the mound with two outs in the fifth inning, scoring Christian Deaton, but Brock Hale made sure it would not be a close game, blasting a grand slam the next half inning.

BYU starter Brady Corless improved to 2-0, 1.89 after allowing one run on four hits in 5.2 innings. He struck out five.

“Brady has been awesome,” Hale said. “Every time he gets up on the mound, I know we’re going to get a good start out of him. I tell him every time, ‘Hey man, you’re freaking killing it. Just keep going.'”

BYU returned one of the top offenses in the country this season. After having the nation’s second-best team batting average (.325), the Cougars brought back seven of their top eight hitters — all of whom hit .317 or better — and talented sophomore Kyle Dean returned after a back injury cut short his freshman season. But that hasn’t translated into consistent production this season.

As the offense has gone, so have the Cougars. In their four wins, BYU is now averaging 9.8 runs per game, but in their five losses that number plummets to 2.6 runs per game.

As a team, the Cougars are hitting nearly 50 points shy of their average last year and key heart-of-the-order bats Tanner Chauncey and Colton Shaver continue to hover just above the Mendoza line. Head coach Mike Littlewood even moved Shaver down to seventh in the lineup on Friday. He was able to do that because of the emergence of sophomore outfielder Brock Hale.

“Brock’s really carried us. Even a couple of the games we’ve lost close, Brock’s been the one that’s kind of done the damage for us. I’ve shuffled him behind Shaver and then in front of him cause Shave is a guy that, even though he’s struggling right now, you need to kind of protect in the lineup.” 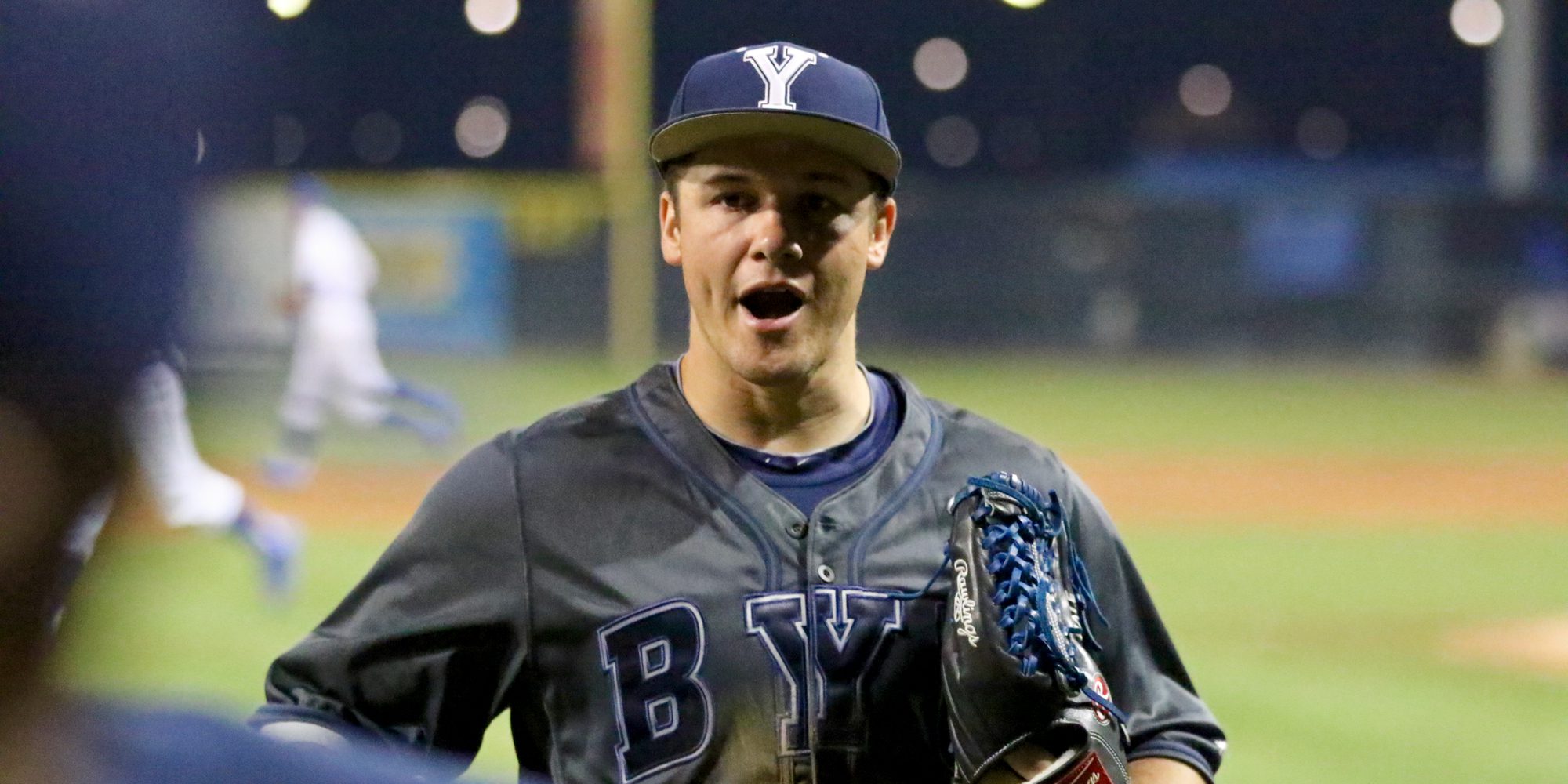 Against Bakersfield, Littlewood moved Hale into the cleanup spot to try to get him up an extra at-bat each game. After reaching twice and scoring a run in the series opener, Hale went off on Friday, knocking three hits, including a no-doubter grand slam to left field, breaking a 3-1 game open.

“I think he’s solidified himself in that spot,” Littlewood said. “He’s just a pure hitter. He just gets up there and hits. He doesn’t think a whole lot. He just gets the job done.”

Hale came to the plate in the sixth inning with the bases loaded after reliever Andrew Hansen had walked Chauncey on four straight pitches.

“He made a mistake walking Chauncey. Chauncey can do some damage, but I was feeling it tonight,” Hale said. “I wanted to be that guy in that situation. It was just having the mindset you want to be the guy. It was just seeing the pitch. I was just sitting fastball and that’s what I got.”

The Roadrunners have had such a strong start because of their ability to grind out positive at-bats and capitalize on their opponents’ mistakes.

“We really don’t care who we’re playing. These kids play with a chip on their shoulder and it’s about playing every pitch for 27 outs,” Beard said. “There’s no shot clock in baseball. We want to make sure we take advantage of their mistakes when they offer them and we’ve done a pretty good job of that up to this point in the season.”

But on Friday, it was Bakersfield’s mistakes that led to BYU runs. A dropped fly ball and another error in the first inning led to an initial run. The Cougars added another tally in the second inning when Bakersfield couldn’t catch a popup behind the pitcher’s mound to end the inning. 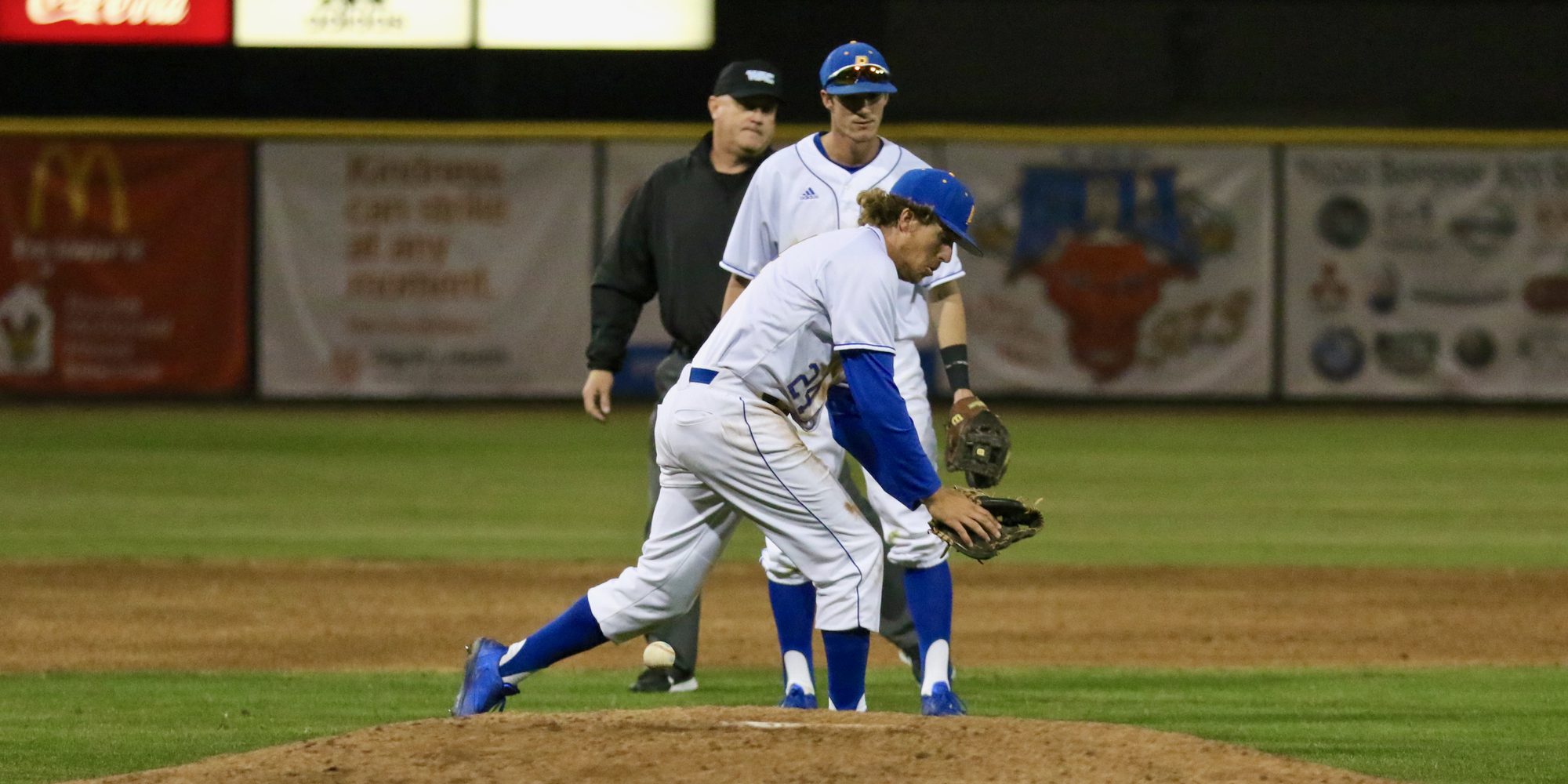 In between the folly-aided runs was a golden opportunity for the Roadrunners to grab a lead to put the pressure on a scuffling BYU offense. Two walks and an error loaded the bases with one out in the first inning, but Mahlik Jones, who finished with three hits and an RBI, struck out and then Max Carter was picked off first to end the inning.

Corless allowed one baserunner over the next three innings and even after Bakersfield got a run in the fifth inning on an infield single, BYU immediately answered with Hale’s grand slam to take full control. The Cougars final three runs were again assisted by a dropped fly ball in left field.

“We’ve been playing pretty good defense and we need to understand that’s why we’ve been successful,” Beard said. “We certainly did not do that tonight. We didn’t take very good team at-bats, which is our whole philosophy. We got outside of our game and it showed on the box score.

“We need to flush it as fast as it came in for sure.”

BYU outfielder Brock Hale talks about his hot start this season, including his three-hit, five-RBI performance to help the Cougars to Friday night’s win:

Bakersfield head coach Jeremy Beard says the Roadrunners have to flush 10-2 loss to BYU and come out ready to try to win the series on Saturday.

Beard also discusses the transition after taking over as interim head coach in December:

– BYU needs its offense to be more consistent and that starts with getting Tanner Chauncey and Colton Shaver going. Littlewood said if they were younger players, he would sit them, but as veterans, he plans to let them work through their struggles. After not playing last year due to academics, Brady Corless has been the Cougars’ best starting pitcher. He attacks hitters and pitches with a chip on his shoulder — an excellent combination. A series win over Bakersfield on Saturday would be big for momentum leading into series against UC Santa Barbara and Connecticut.

– If Bakersfield can play better defense, it has a chance to compete in the WAC. First basemen/pitchers Max Carter and Mahlik Jones give the Roadrunners a pair of solid arms at the front of the rotation. Neither has big stuff, but both know how to pitch. Jones didn’t have a good breaking ball on Friday, but had allowed only one earned run in 5.1 innings when he left the game.