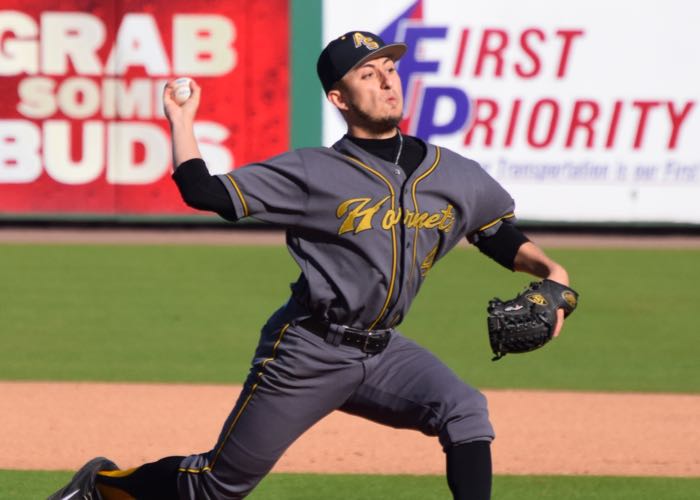 Hornets, Cards Come From Behind In Clearwater

CLEARWATER, Fla. — When Mervyl Melendez left the MEAC powerhouse he had built, Bethune-Cookman, to try to build Alabama State into the class of the SWAC in 2011, he and recruiting coordinator/associate head coach Jose’ Vasquez brought a strong group of incoming freshmen with them. Together, that core of players and the ASU coaches have taken a program that went 14-29 in 2011 and 20-36 in Melendez’s first year in 2012, and made it very dangerous. The Hornets improved to 32-25 in 2013, then made another jump last year, going 37-20 overall and 21-3 in the SWAC.

Alabama State should be even better this spring, because Melendez’s first group of recruits are now seniors who know how to win. And a skilled, seasoned senior core can take any team a long way.

ASU’s seniors shined Saturday against No. 19 Cal State Fullerton, and a freshman—Hunter Allen—delivered a go-ahead two-run single in the sixth to lead the Hornets to a 3-2 upset win.

“I think over the last three years, we have gotten our program on the map,” Melendez said. “I think a lot of people respect what we do as coaches, and as a program, and the system works. It’s been proven for the last 15 years that we go out and play, we catch and throw with the best of them. If you play quality, sound baseball, it’s bound to bounce your way at times.”

Senior second baseman Einar Muniz, a 5-foot-5 stick of dynamite, led the charge for Alabama State, going 3-for-4 with an RBI double off the left-field wall that keyed ASU’s three-run sixth-inning rally. With a runner on first base, the Hornets called a hit-and-run, and Muniz hit a towering fly ball that would have easily cleared the fence if not for a strong wind gusting from left to right. 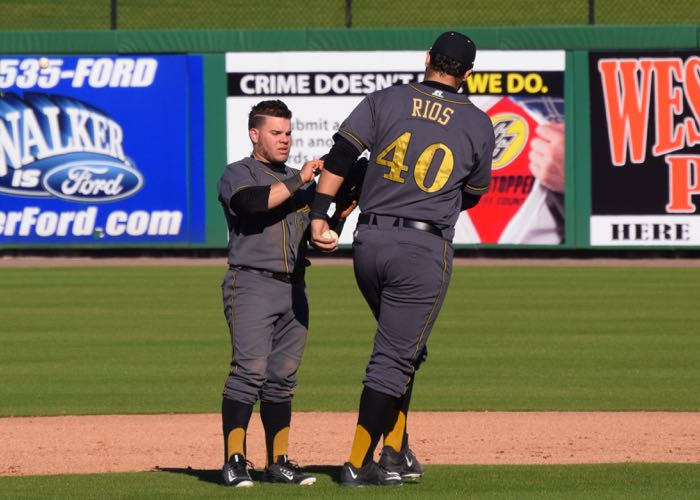 Muniz also thwarted a Fullerton rally in the seventh with a tough defensive play. With the tying run at second base, Jake Jefferies hit a hard chopper to Muniz’s left, and he threw to first while falling down to get Jefferies by a step and end the threat.

“I was telling some ex-players—we’ve had a lot of support over the last 10 years, had probably 10, 15 ex-players that have come to watch us—I told them, ‘This is our best player, the little guy,’ ” Melendez said. “They look at me like, ‘Are you serious?’ He made a hell of a play there at second base. Of course he had two or three big hits. And that hit and run that he almost hit out—with that little body, I don’t know where he gets the power from.

“He studies the game, he has passion for the game. Last night, he was the only player here watching Fullerton, seeing what they do. When we looked behind us, there he is right next to us saying, ‘Hey Coach, what do they have?’ So he studies the game, but he’s got a passion for it. Those guys, you want to coach forever. Hopefully, we can get another four years out of him—even though he’s a senior. We can lobby the NCAA and see if we can have him.”

Muniz plays the game fearlessly, and he was not going to be intimidated going up against a storied program like Cal State Fullerton. And his mentality helps set the tone for the rest of the team.

“We’ve been playing big schools before,” Muniz said. “Last year we beat Miami. The year before we played Arizona, and we played pretty good games. I think those games prepared us for our senior year right now … Inside the field, it’s no fear for me, everything’s different. This is what I live for, this is what I like, this is my passion. It’s not just a game, this is my passion. I just try to separate things from outside the field and bring good energy for the team.” 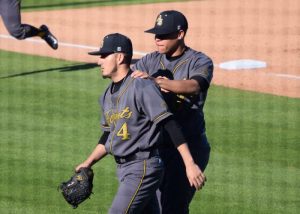 Another senior, wily low-slot righthander Joseph Camacho, started the game and brought plenty of energy and fearlessness of his own. The Titans put runners at the corners with no outs in the second, and Camacho escaped the jam unscathed by striking out the next three batters in a row. Fullerton got to him for two runs in the fourth to take a 2-0 lead, but he responded with three more shutout innings after that and exited with nine strikeouts over his seven frames, holding the Titans to six hits. He thrives by spotting his 84-87 sinker well to induce plenty of ground balls and mixing in an 80-81 slider that Melendez said has gotten better over the last two years, giving him an out-pitch.

“Camacho has been good for the last two years,” Melendez said. “He really picked up where he was last year—he was 10-1 last year. He had a great outing against a tough opponent. We have to understand the quality of the victory that we had, and the quality of the opponent. The tougher the opponent, the tougher that he pitched, and the tougher the situation, the tougher he pitched. The fact is, he didn’t want to come out of the game. We had to take him out of the game. We tried in the sixth, and he said, ‘No, I have one more.’ I did in the seventh, and he looked at me wrong like, ‘Let me go out.’ But that’s the right thing to do. It’s too early to go over the pitch count we have for him.” 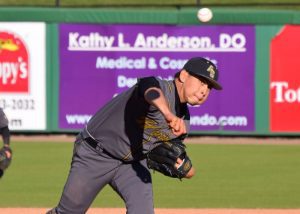 And Alabama State loses nothing when it goes to the bullpen. Athletic 6-foot-6 junior righthander Jorge Pantoja worked a 1-2-3 eighth, showing a 90-93 fastball and a solid 82 mph slider. Five-foot-9 righty Armando Ruiz—another key senior—followed with a 1-2-3 ninth, striking out two. He has a quick arm with less effort than you’d expect, generating 91-93 heat and a sharp 81 slider.

“We got some secrets here, that a lot of people don’t really know,” Melendez said of his power bullpen arms. “They may see it on paper, but once you see it, they’re electrifying arms. Once you put those guys out there, I think they can pitch with the best of them. We’ve just got to get them the lead after the seventh inning, and I feel very good about our chances after we do that. Ruiz has been with us for the four years, Pantoja’s been here since he was a freshman. And Camacho since he was a freshman—they’re homegrown. We get not a lot of juco guys, we like to work with our guys and get them better.”

And this group of seniors—from Ruiz to Muniz to Camacho to ace T.J. Renda to powerful right fielder Waldyvan Estrada—has done just that.

“This was the first senior class that Melendez brought into ASU,” Muniz said, “and we’re trying to enjoy the most out of it.”

Louisville’s Next Wave Of Talent Starts To Emerge

The night game at Bright House Field featured another team coming back from an early 2-0 deficit. After South Florida’s Levi Borders put the Bulls on top with a two-run homer in the first inning, Louisville stormed back to win 7-3, riding major contributions from some newer faces who are expected to make big impacts this year.

Freshmen Blake Tiberi and Colby Fitch provided the big blows for the Cardinals, who stormed ahead for good with a four-run third inning. The Cardinals sent nine men to the plate that inning and rapped out five hits, including Tiberi’s hard single to center and Fitch’s RBI triple off the right-field wall. The duo finished with two hits apiece. 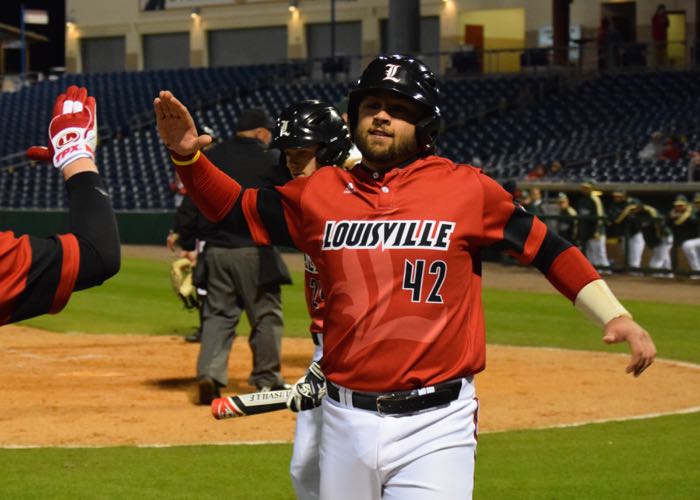 Fitch, a burly catcher who got the start over sophomore Will Smith, also singled up the middle in the second and was robbed of a hit by a diving stop by USF first baseman Buddy Putnam in the seventh.

“Colby was one of our top hitters in the fall,” Louisville coach Dan McDonnell said. “And you know how high I am on Will Smith. So, to take Will out and catch a freshman, we’ve just got to get Colby opportunities—it’s a big bat. And (freshman) Brendan McKay got an at-bat. Those are two lefthanded hitters who will become staples in our program here in the near future.”

Tiberi, a DH hitting in the 5-hole, put the game out of reach with a two-run homer to right field in the fifth. That one came against soft-tossing USF righty Cody Hernandez, who had just baffled Corey Ray and Zach Lucas by following Casey Mulholland’s 90-91 fastball with a heater that topped out in the low 70s. Tiberi waited, waited, ran across the street for a sandwich, ate the sandwich, then returned to the batter’s box and hit a 59 mph curveball over the right-field wall.

“He’s been put in that DH role, it’s a role Gardner had when he was a young player for us,” McDonnell said. “Blake had that big summer in the New England league, and we know he can hit. If you give him enough at-bats, it’s just quality at-bats, and obviously he put together a good swing there. He’s just a good hitter. When people ask me about Blake, he can handle velocity—left, right. And I feel like he’s going to move the ball. He’s in a crucial spot there in that 5-spot, where we need guys that can move the ball, and I think Blake’s going to be able to do that for us.”

Sophomore lefthander Drew Harrington is also expected to play a big role this year for the Cardinals, and he slammed the door after an uncharacteristically wild Anthony Kidston exited in the fifth. Harrington went the rest of the way, striking out nine while allowing just an unearned run on two hits and a walk over 4 1/3 innings. A good athlete with a smooth delivery and a strike-throwing arm action, Harrington pounded the zone with 89-92 heat and had good feel for his 77-80 breaking ball.

“I said in the opening day press conference: I think Drew Harrington’s the X-factor for our pitching staff,” McDonnell said. “He’s a fourth weekend starter that we can use in any role at any time. He’s very durable, and as you saw tonight he pounded the strike zone. And I think that’s a huge advantage for our pitching staff.”