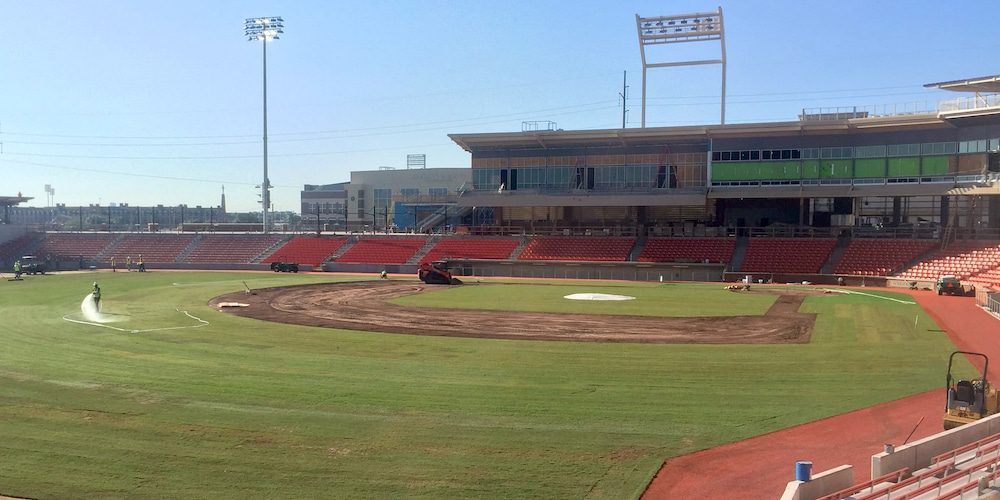 Progress in college baseball is always in plain view.

While much of the discussion the past few months has been on what the sport has been unable to accomplish from a legislative standpoint, that hasn’t deterred or stopped programs from aiming for the stars when it comes to facilities upgrades.

Mississippi State upped the stakes from a facilities standpoint last year when it christened a brand new, incredible, near $60 million ballpark. SEC foe Florida is following suit with its own $50 million ballpark, while others such as Oklahoma State and Marshall are also building cathedrals that will help those programs succeed and offer a more attractive product on the recruiting trail.

Here are a few updates on major facilities renovations around the country.

There’s not a program more deserving of a new ballpark than the Gators. They’ve been the most successful program in college baseball over the past decade and have done so while playing in an incredibly stale ballpark that doesn’t have any shade in the State of Florida. Yep, it can be as miserable as it sounds for Gators fans attending midday games from about April until the end of the season. The good news? The new ballpark is catered to the fan and has amenity after amenity. It also will come with a roof that will at least cover up the club seats and some rows at field level. That’s a much-needed addition. Credit Kevin O’Sullivan for winning games and athletic director Scott Stricklin for actually putting all the pieces together. The ballpark is slated to open in 2021.

Hi Lisa–maybe this image will help you get a better sense. The design is optimized to provide as much shade as possible. pic.twitter.com/r4Hu8q7Dje

Interested in a closer look at the new #FloridaBallpark?

Take a look at our new fly-through video! pic.twitter.com/ftYMKsMlqF

The Thundering Herd is moving at a rapid pace. The school announced earlier this week that it had purchased the land to build the new ballpark and has kicked off a $22 million fundraising project with hopes of moving into the new ballpark in 2001. That seems like an ambitious plan, but kudos to the Herd for putting the plan into work. Marshall’s new ballpark is hardly a surprise. The Herd had to do something. While West Virginia, its rival, opened a sparkling new ballpark a few years ago, the Herd has been relegated to a Minor League ballpark in Charleston, W.Va., 45 minutes away from campus. This is a game changer for the program.

Herd fans, we are moving closer to the day that we’re playing baseball in this stadium. You know we’re going to need your help, and we’ll need everyone to pitch in. Thank you, #HerdFamily!

Speaking of programs in dire need of a new ballpark, the Cowboys, as with Florida, were near the top of the list before the university committed to building a new ballpark. We’ve heard the Cowboys had a new ballpark coming for at least a decade now, and it’s finally come to fruition. As Tom Petty says, “Waiting is the hardest part”, and this ballpark might be worth waiting for given how beautiful it seems to be. Oklahoma State officials and head coach Josh Holliday have been aggressive in keeping fans up to date on the progress, and the Pokes have a true cathedral. They didn’t cut corners or try to do anything on the cheap. I love to see this for the OSU program. In addition to being one of the nation’s most historic programs, OSU also has had rich success under Holliday and has deserved better stomping grounds for years. Now that OSU is building a premier facility, you have to believe its rivals down in Norman are next, right?

Wrap around view from the home dugout pic.twitter.com/yBZaE0mqxo