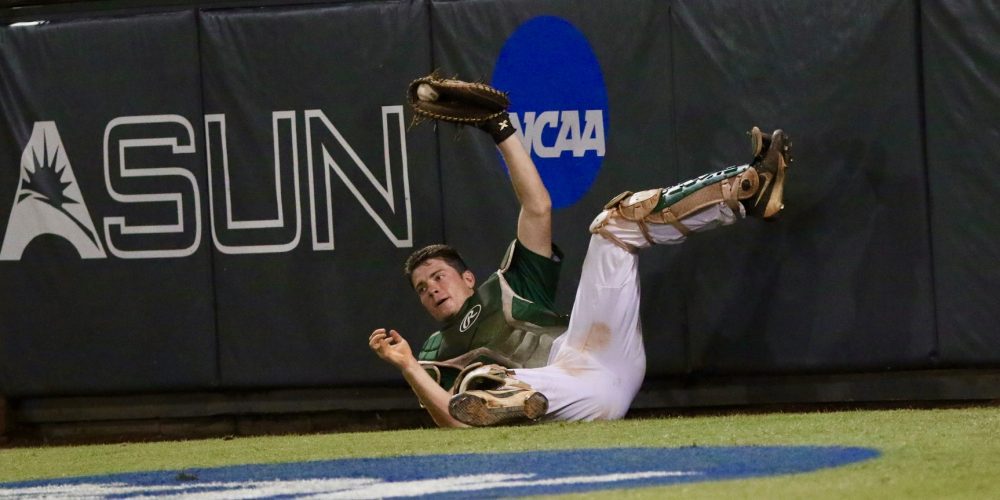 DeLAND, Fla. – Jonathan Meola’s father likely never made a catch this dangerous – not even in the World Cup.

Yes, Meola, the Stetson third baseman, came away with perhaps the web gem of the year, but teammate Austin Hale, a catcher, made two spectacular grabs of his own – including one of a body part.

“Guys selling out like that – it shows how much they care,” said Stetson righthander Logan Gilbert after the Hatters tied their 1994 school record with their 17th consecutive win, which is also the longest active streak in the nation.

It was that kind of night for the top-seeded Hatters, who supported Gilbert with Corinthian-leather-type defense.

Gilbert, a projected first-round pick in Monday’s MLB draft, struck out a season-high-tying 14, leading the Hatters to a 10-2 win over third-seeded Oklahoma State. Gilbert is now 11-1 with a 2.52 ERA and an NCAA-leading 157 strikeouts in 107 innings this year.

Eleventh-ranked Stetson (47-11), which is hosting an NCAA regional for the first time in program history, can win this tournament Sunday night when the Hatters face either Oklahoma State or South Florida. Junior righthander Jack Perkins (10-2, 2.57) will start for Stetson.