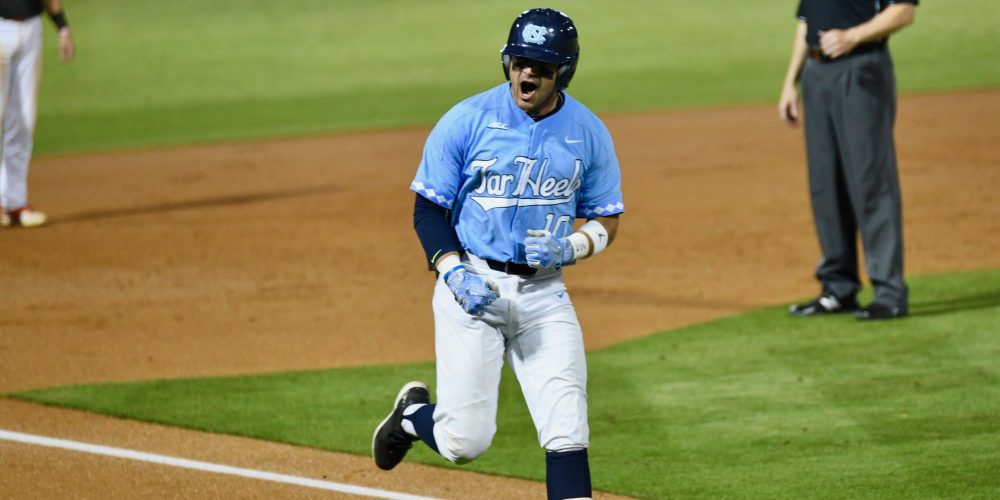 CHAPEL HILL, N.C. — One of the hallmarks of this North Carolina team is its willingness to make use of its roster depth. UNC coach Mike Fox has repeatedly said this might be the deepest team he’s ever coached, and the Tar Heels love to make defensive substitutions or call upon pinch-hitters to play matchups — as they did repeatedly in their most thrilling win of the regular season, a fierce comeback against Georgia Tech.

So it shouldn’t have been too much of a surprise that a player who came off the bench made the biggest play of UNC’s most important win of the season to date, a 4-3 victory over Houston on Saturday in the Chapel Hill Regional.

Junior outfielder Josh Ladowski entered as a pinch-hitter in the seventh inning, with UNC leading 3-1. He grounded out in that at-bat — but then he took over in right field, and he made his presence felt on defense in the bottom of the frame. After Houston scored on a wild pitch to cut UNC’s lead to one run and put the tying run on third base with one out, Kyle Lovelace lined out to Ladowski in right. Cooper Coldiron tagged up — and Ladowski cut him down with a strong throw that short-hopped into the glove of catcher Cody Roberts, who applied the tag on a bang-bang play.

Fox later said UNC’s crowd Saturday was as electric as any he could remember in his 20 years in Chapel Hill, and the noise was deafening as Ladowski sprinted in from right field and emphatically chest-bumped UNC reliever Josh Hiatt, who had inherited the jam and proceeded to escape it with Ladowski’s help.

“It was a little scary,” Hiatt said of the chest bump. “I didn’t really know what was coming from Josh, he’s pretty crazy … That was one of the best defensive plays I’ve ever seen, so I was pretty happy for him.”