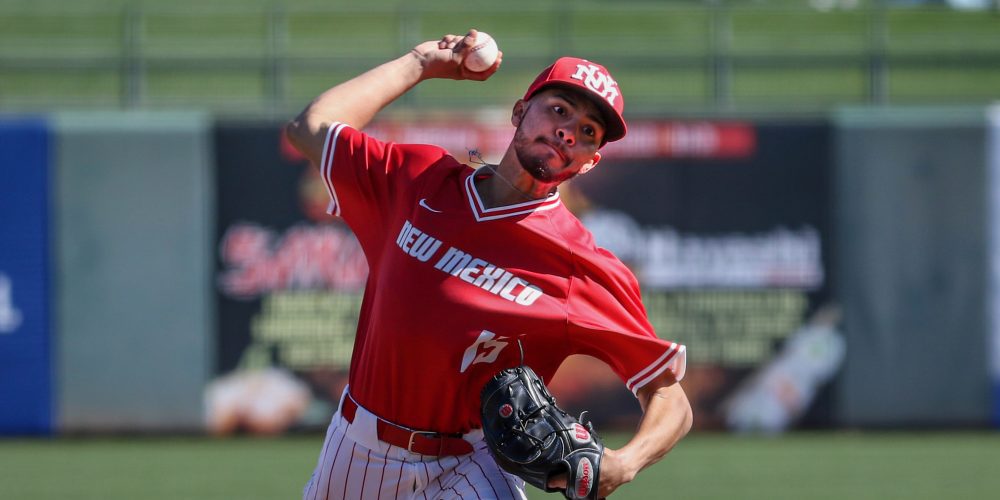 Aaron Makil picked up the win in his first Division I start. (Shotgun Spratling)

Tears stretched down the face of Aaron Makil as he stood in a receiving line, absorbing the emotion of lengthy, heartfelt hugs from 30-40 friends and family members that were lined up awaiting an embrace.

The New Mexico junior righthander was overcome by the showing of support. He wasn’t a highly coveted recruit coming out of high school at 5’10”, 160 pounds, so he went to a local junior college. He continued to work on and hone his craft and produced two stellar seasons at Chandler-Gilbert Community College, going 8-2, 1.49 with 10 walks in 72.1 innings last year after striking out 89 with a 2.75 ERA in 68.2 innings his freshman year.

“It’s just been a lot of hard work finally paying off and being able to come back here and throw in front of my family in my hometown is something really special to me,” Makil said following the Lobos’ 2-0 victory over BYU Saturday morning at Surprise Stadium.

He didn’t disappoint the large swath of Makils in attendance, many from the nearby Salt River Pima-Maricopa Indian Community, wearing New Mexico gear. He produced a Division I debut that would have been worthy of writing home about.