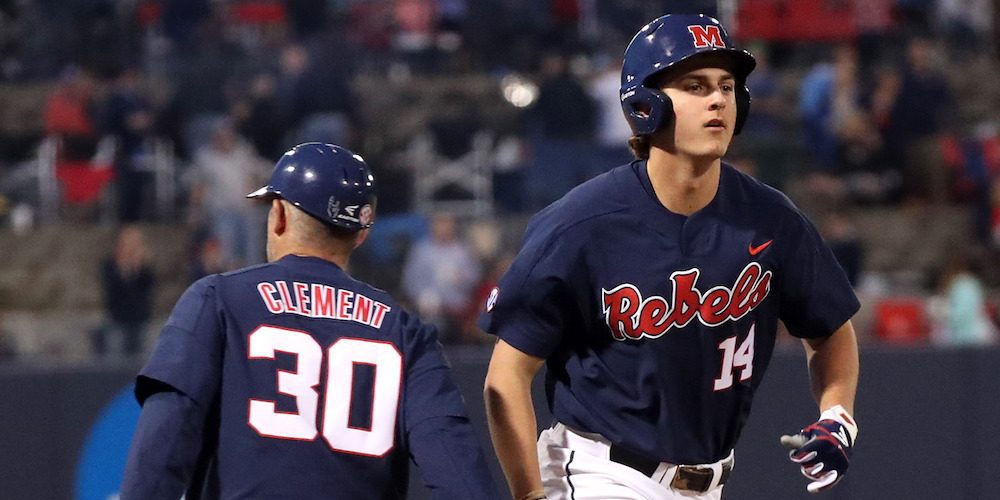 FAYETTEVILLE, Ark. — The new hit-by-pitch rule has taken the college baseball community by storm. We’ve already seen plenty of instances where a batter was called out on strikes after being hit by a pitch.

As the rule states in the NCAA rules guide, “The point of the rule is to penalize the batter with a strike and not award first base if, in the judgement of the umpire, the batter makes an intentional movement to be hit by a pitch, regardless of where the pitch is located.”

And the rationale behind the rule?

“To provide guidance in enforcing the hit by pitch rule and to deter batters from attempting to be hit by the pitch. “Freezing” by a batter is not considered making an intentional movement. A batter who freezes inside the batter’s box and who is hit by a pitch shall be awarded first base.”

With that said, we had a tense situation in the bottom of the ninth inning with Ole Miss leading Arkansas 4-3. Arkansas leadoff hitter Jacob Nesbit had a 1-2 count with Ole Miss righthander Parker Caracci on the mound. Caracci went inside on Nesbit, clearly in the batter’s box, but the young Razorbacks slugger turned his back shoulder in reaction and leaned into the baseball.

The umpire called Nesbit out because it was a two-strike count. And after some politicking from Arkansas head coach Dave Van Horn, the umpire crew reviewed and upheld the call at the plate. The Hogs went quietly in the ninth inning as the Rebels evened the series.

As for the play in question, there’s zero doubt that Nesbit leaned into the ball, whether it was a natural or intentional movement. But there’s also no doubt that Caracci threw a ball in the batter’s box occupied by Nesbit. It’s my take that, at the least, if a ball goes into the occupied batter’s box, it should never be called a strike. A no pitch or something? Sure. But a called third strike in the ninth inning of an important conference game? No thanks.

Our Kyle Peterson and others had a noticeable outcry on a similar hit-by-pitch play and call last week, and this one will get the NCAA’s attention as well.