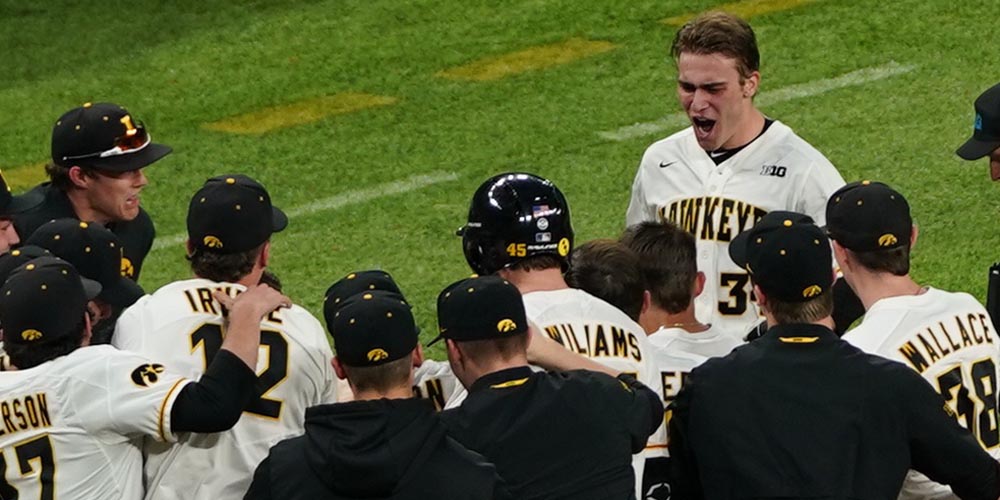 Austin Martin jumps on home plate as his Hawkeye teammates celebrate the win over North Carolina.

MINNEAPOLIS — Oh man, what a panic. This second day of the Cambria College Classic was full of white-knuckles and cool hand Luke’s. Two of the days games went into extra innings and the first game was just another continuation of the high-quality pitching we have seen here in the giant Viking Ship known as U.S. Bank Stadium.

Look I know the water in Houston is supposedly bad now. But there must seriously be something in the water here in the Twin Cities, because there have been a number of wicked-stout pitching performances every time you turn around. On Friday it was Duke’s Bryce Jarvis, who struck out 11 with no walks in 7.0 innings and Minnesota’s Max Meyer, who threw a complete game with a career-high 14 strikeouts.

Today was no different. It all started in the first game with North Carolina State’s Nick Swiney, who came into the Cambria College Classic with a 2-0 mark and a 1.38 ERA in his 13 innings so far this season. He amped things up today with an 8.0 inning, 15 K, zero walk performance that took just 98 pitches in all as the Wolfpack opened day two here in Minneapolis with a dominating 6-0 squashing of Purdue.

“Nick was something special today,” N.C. State head coach Elliott Avent told me afterward. “He gave up a leadoff single in the first inning and that was the only hit they got the rest of the way. And I’ll be honest with ya’ they never got a hard hit ball after that either.”

Swiney did indeed give up that leadoff single to Hunter Skyler on his third pitch of the day and also hit the fourth batter of the day he faced. But from there Swiney retired the next 22 Boiler batters in a row. Twenty-two. As mentioned above, 15 of those were by strikeout. I mean, c’mon, that’s not even fair. Somebody should contact the NCAA about this guy.

“He had command of all three pitches, fastball, breaking ball and change up,” Avent noted. “I thought if was the best fastball command I have seen him have so far.”