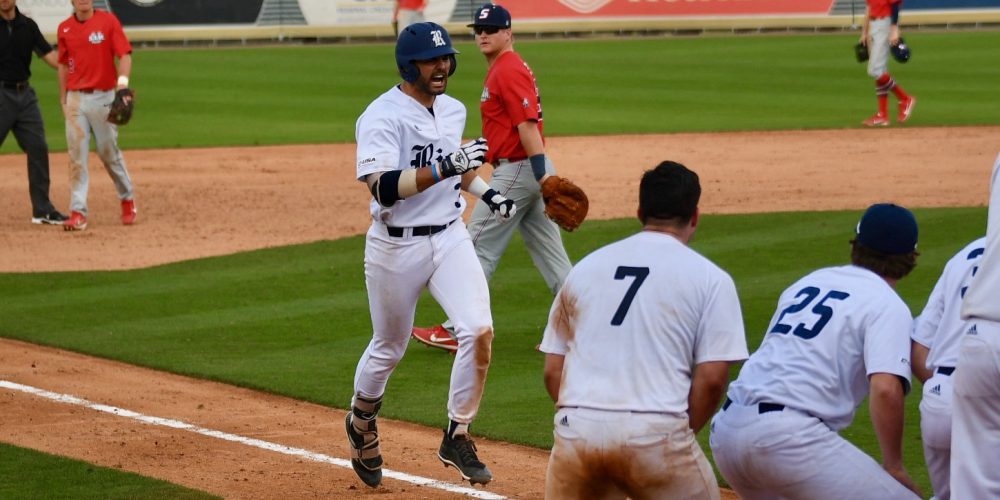 ORLANDO — Wayne Graham always knew Chace Sarchet could hit. There’s a reason Sarchet — who batted just .215 in 79 at-bats last season — was starting at first base and hitting in Rice’s 5-hole on Opening Day against Samford.

Sarchet made it clear that last year’s struggles are behind him on Friday, opening Rice’s season with an exclamation point. In a sloppy back-and-forth game, Samford took a one-run lead in the top of the ninth, but Sarchet propelled the Owls to a thrilling 8-7 victory with a two-run, walk-off homer to right in the bottom of the ninth.

That at-bat was a good example of Sarchet’s growth as a hitter. Samford’s sidewinding closer, Wyatt Burns, started Sarchet off with a back-foot slider, then went to a fastball away, before going right back to that back-foot slider. Sarchet was ready for it, and turned on it for a homer that just cleared the glove of leaping right fielder Bradley Gneitling.

“I would have been really mad if he would have caught that — it was a lot closer than I thought,” Sarchet said. “But it was fun, we had a lot of fun today.”

The Owls expected Sarchet to be a key addition to their 2017 club after signing him out of Weatherford (Texas) JC, where he hit .371 as a freshman and .324 with 12 homers as a sophomore. he started 27 games but struggled with his approach and his mindset, and in April he suffered a partial tear of his ulnar collateral ligament, keeping him out of action all summer. He used the down time to better himself in other ways.