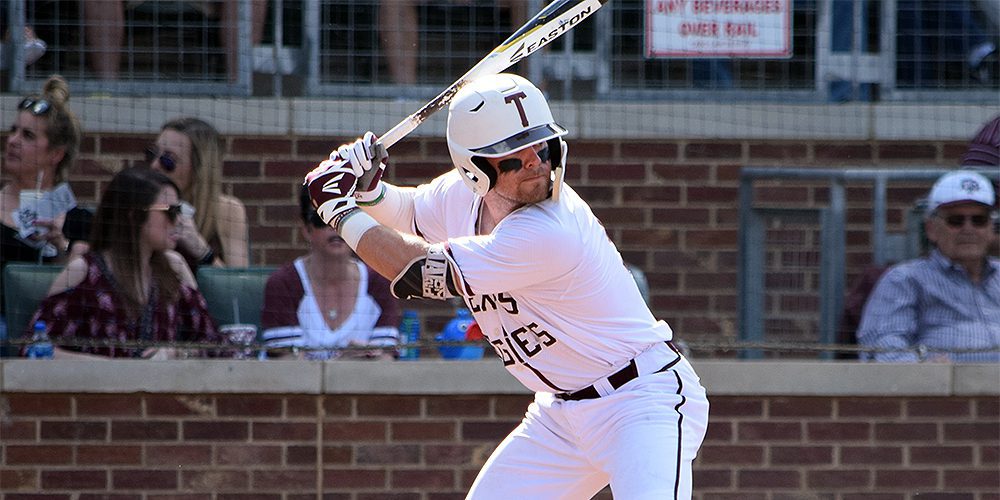 COLLEGE STATION, Texas – Texas A&M’s Logan Foster is doing what he needs to do to potentially become one of the nation’s premier hitters the first four weeks of the season.

Foster, a stocky 5-foot-10, 190-pound, sophomore from Nebraska, showed flashes of greatness at the beginning of last season. He showed power early in the year and looked like a slugger ready to put together an amazing freshman campaign. Foster still put together a solid season, hitting .280 on the way to a College World Series appearance. But he just wasn’t the same after the first few weeks of the season. He still showed some power at times, but he struggled immensely with breaking balls and finished the season with 59 strikeouts as opposed to 15 walks.

Foster had all the tools to be a special hitter, but needed to develop a better plate approach, especially when dealing with secondary offerings.

Foster finished up his freshman season and went off to the Northwoods League for the summer. There, he tweaked his batting stance and worked hard at being more selective at the plate, while also doing a better job of hitting breaking balls.

The offseason improvements he made couldn’t have been more noticeable than they were on Saturday as the Aggies ambushed Zak Bayooun and Long Beach State, 19-1.

“He had a very, very special day, and he’s been consistent all year long. It’s been fun to watch him grow and develop from an approach standpoint,” Texas A&M coach Rob Childress said. “He had a lot of swings and misses last year as a freshman, and now he’s different. He’s willing to take his walks and he’s not chasing as much out of the zone. He’s one of those guys that when he swings the bat now, he has a chance to do something pretty big with it.

Foster’s ridiculous week at the plate began Wednesday afternoon with a home run against Northwestern State. It continued Friday night in the series opener against the Dirtbags. In that contest, LBSU starting pitcher Clayton Andrews actually held the hot-hitting Aggies in check most of the game, but the Dirtbags opted to bring in Eli Villalobos after the seventh inning. Foster pounced to extend the A&M lead to 3-1 with a home run to center field that was an absolute no-doubter.

The no-doubter trend continued Saturday afternoon against the Dirtbags. LBSU sent Bayooun to the mound. And while the lefty, who sat 88-90 with his fastball, allowed four runs in six innings against Ole Miss last weekend, he combined to allow just three runs in 14.1 innings in his first two starts against St. Mary’s and TCU.

Bayooun had one of the worst starts of his career against the Aggies, and the damage started early and was often.