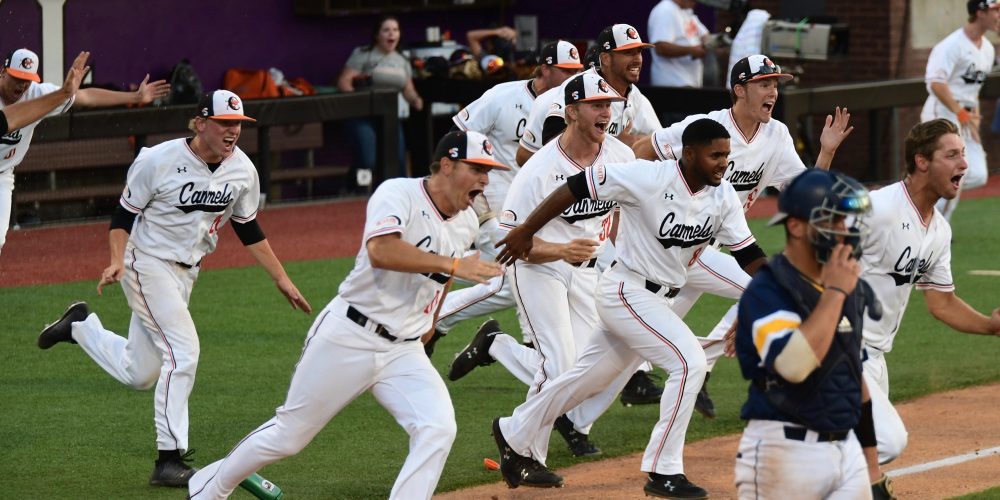 INSIDE:
•
Campbell earns a scintillating win in a back-and-forth thriller against Quinnipiac
• The end is bittersweet for Quinnipiac after raising the bar for the program
• Jake Agnos comes up huge for East Carolina to send NC State packing

GREENVILLE, N.C. — It wasn’t the winners’ bracket game that anybody anticipated, except maybe a few bold souls from Hamden, Ct. and Buies Creek, N.C. But the Sunday afternoon battle between fourth-seeded Quinnipiac and third-seeded Campbell delivered all the drama and wind momentum swings of a heavyweight prize fight.

The two upstarts of the Greenville Regional traded blows for nine scintillating innings. The lead changed five times in the first eight innings, and the game was tied 7-7 after eight. By that point, it was starting to feel like whichever team batted last would win. Quinnipiac surged ahead in the ninth — but Campbell batted last, and Campbell had an answer. The Camels took advantage of two hit batsmen and an error to score twice in the ninth, winning 9-8 on a walk-off sacrifice fly, setting off a frenzied celebration and sending Campbell to Monday’s regional final against the winner of Sunday night’s ECU-Quinnipiac elimination game.

“I told the guys pregame that they’re a lot like us: very scrappy, hit a lot of doubles, put pressure on the defense, and they do,” Campbell coach Justin Haire said. “They don’t go down easy; I give them a lot of credit. They’re playing at a high level, and that was a very fun game, and our guys just kept responding.”