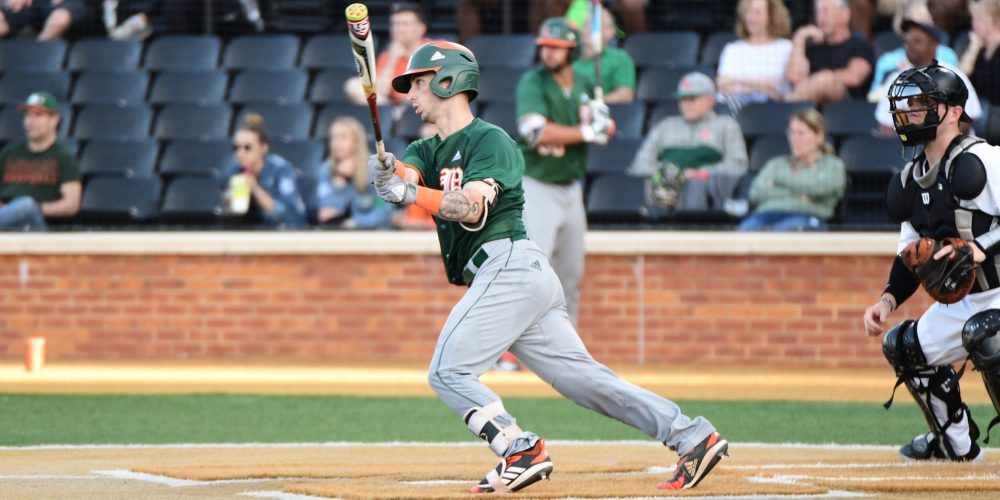 WINSTON-SALEM, N.C. — All season long, Miami has had to deal with injuries to key players, but the Hurricanes have kept on winning. The injury plague peaked over the last few weeks, as Miami has been without its top two weekend starters (Evan McKendry and Chris McMahon) and its shortstop/No. 3 hole hitter (Freddy Zamora), while cleanup man Raymond Gil has remained hampered by the hand injury that sidelined him in the fall and early spring — and then he took a ball off his eye a couple of weeks ago.

Yet the Canes have won eight of their last nine games despite all that. Friday presented their stiffest test during that stretch, a road game against dangerous Wake Forest, the opener of a key series for both teams as Miami chases a home regional and Wake pursues an at-large bid. And the Hurricanes responded with an impressive complete team performance in a 7-3 victory.

“It’s a big win. It’s a tough place to play and they play good here, they do,” Miami coach Gino DiMare said. “This is an offensive park that suits their players. I thought it was a great team win, just overall.”

Indeed, the Demon Deacons are a totally different team in the cozy confines of David F. Couch Ballpark, where they are 18-9 this spring, compared with 8-12 on the road. And when the wind is howling out like it was Friday night, Wake’s pack of sluggers becomes even more fearsome.

So Miami righthander Brian Van Belle knew what he was up against Friday night — but he answered the bell, as he has all season long. …