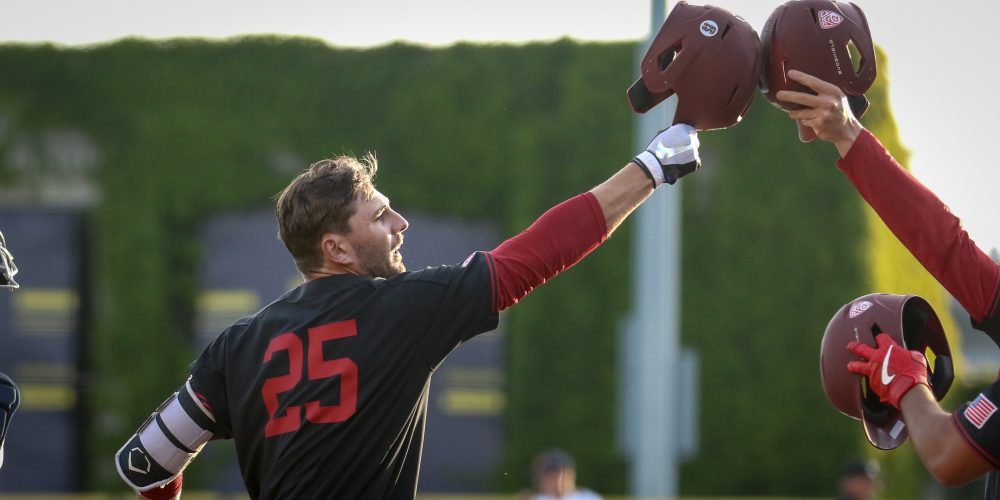 Andrew Daschbach got the Cardinal on the board first. (Shotgun Spratling)

BERKELEY, Calif. — “We talk about having a different hero every night and everybody on our team has potential to be that,” Stanford redshirt junior Duke Kinamon said.

Anyone can be the impact player on a given night, in part, because the No. 2 Cardinal have one of the most experienced lineups in the country. The nine hitters head coach David Esquer sent to the plate on Friday in a 10-7 win over California entered the night with a combined 874 career starts. Six of the Cardinal (36-8, 18-4 in Pac-12) in the lineup had at least 100 starts.

Kinamon made sure it was his turn to stand out Friday night at Evans Diamond. He had four hits, scored three runs and drove in three more. He walloped a pair of home runs, including Stanford’s fifth of the game in the ninth inning for the exclamation point of a rivalry win. Though Kinamon never goes into a game with the goal of being the team hero, the 5-foot-11 redshirt junior said knocking a second long ball gives him some bragging rights for the night against the team’s bigger, power hitters.

“He kind of anchors our defense and he’s starting to make up for lost time with the bat,” Esquer said. “You just don’t jump on the college diamond and hit the ground running. He works really hard at it, so I’m just proud that it’s starting to show up on the field.”

The Cardinal’s second baseman has turned it on the last three and half weeks. It took him a while to get going as he returned from an injury that cost him all of the 2018 season. He had three extra base hits and no home runs with only nine RBIs through the first two months of the season. But over his last 14 games, Kinamon has hit five home runs and driven in 16 runs.

Having patience to battle through the slow start was tough for Kinamon.