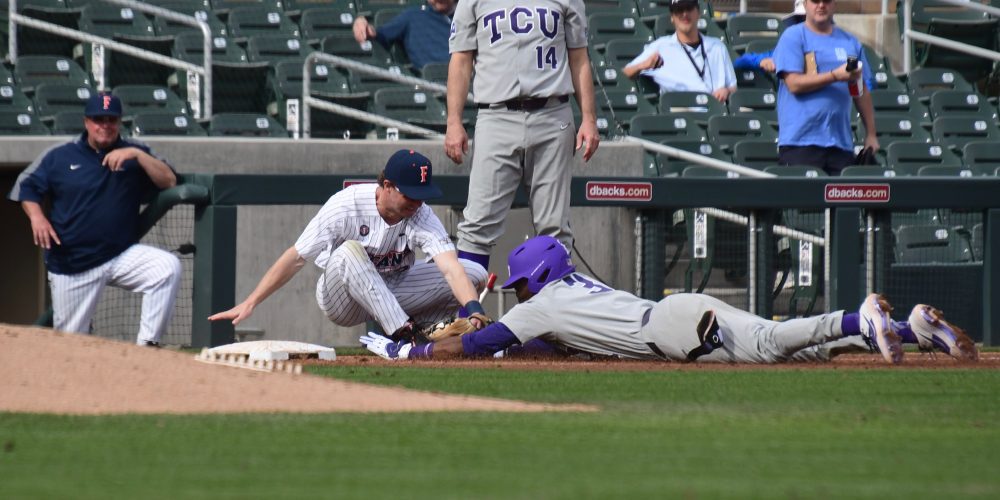 SCOTTSDALE, Ariz. — Minutes after Cal State Fullerton center fielder Mitchell Berryhill ranged into the right-center gap and made a spectacular catch crashing into the wall to strand two TCU baserunners in the ninth and secure a 2-0 win, Rick Vanderhook discussed that game-ending play.

“If he doesn’t catch that ball, he doesn’t play. I will take him out,” the Fullerton coach said. Just then Berryhill ascended the dugout steps and walked in front of Vanderhook.

“OK, I’m just making sure you’re clear of that.”

“I’ll catch that every time,” Berryhill answered, not missing a beat.

It was anything but a routine catch, of course — but Berryhill is in the lineup largely for his ability to make the extraordinary play look routine. “He’s supposed to defend,” Vanderhook said. “Supposed to defend.”

The last time Fullerton played a game that counted, its defense unraveled late in a heart-breaking extra-inning loss to Washington in super regionals, ending its season one win shy of another trip to Omaha. The Titans always pride themselves on being fundamentally sound, so that was a particularly brutal and uncharacteristic finish to the season.

A number of key veterans from that club are back in everyday roles this spring, led by the up-the-middle group of Berryhill, shortstop Sahid Valenzuela, second baseman Hank LoForte and catcher Daniel Cope. That quartet forms the backbone of what should be a very strong defense in 2019, and it got off to a very good start against TCU, which had baserunners in each of the last seven innings but failed to push across a single run.