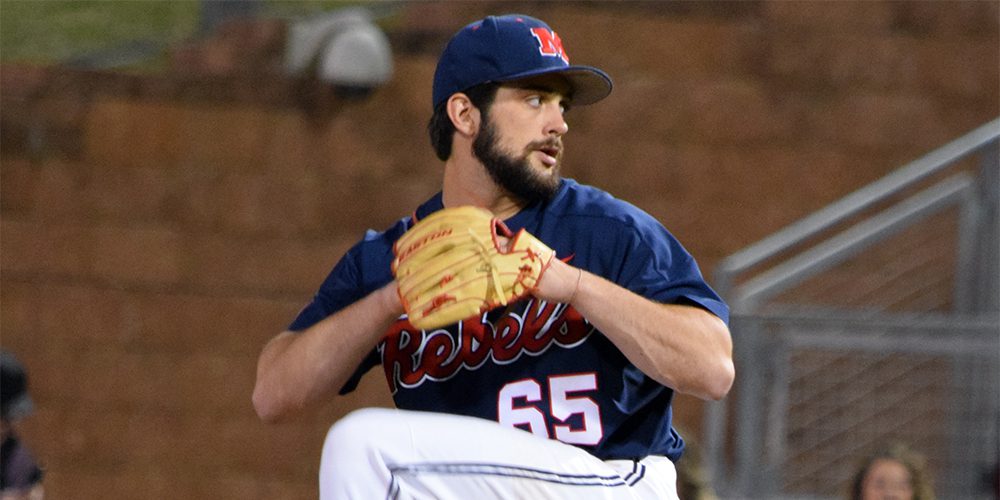 COLLEGE STATION, Texas — Ole Miss redshirt sophomore righthander Parker Caracci waited two years for a moment like Thursday night. It’s why, despite not making the Rebels roster the last two seasons, he decided to remain in Oxford instead of transferring out.

In a game that was controlled by Texas A&M much of the way, the Rebels fought back in the top of the eighth inning to score three runs and to take a 5-4 lead heading to the bottom of the inning. Righthander Will Ethridge was masterful out of the bullpen with six strikeouts in three shutout innings, but Ole Miss coach Mike Bianco wasn’t about to put the righty back out there after throwing 52 pitches. After all, he might need him again at some point this weekend.

So, with a narrow advantage, he called on Caracci, who had appeared in eight games and had an 0.71 ERA in 12.2 innings, along with 26 strikeouts and one walk entering the night, but who also hadn’t faced an opponent quite like this Aggies.

Nothing changed. It was pure dominance … again.

The first pitch from Caracci was 94. Then there was a 95. Then there was some trouble. Caracci punched out Allonte Wingate on an 81 mph curveball, but the Aggies got singles from Cole Taylor and Zach DeLoach before Michael Helman reached on an error. Suddenly, A&M was threatening to take over with bases loaded, just one out and guess who up next? Braden Shewmake, followed by hard-hitting Logan Foster.

That didn’t matter to the hard-nosed Caracci.

Caracci proceeded to go 93, 94, 95 and he struck out the All-American Shewmake on a 95 mph heater. But he had to get through Foster to escape the inning unscathed. Again, on a 1-2 offering, Caracci rared back and struck out Foster, this time via a 96 mph fastball. The stuff was electric and it set the tone for an easy ninth inning and an Ole Miss victory in the series opener against the Aggies.

“He’s been so lights out. He’s just filling up the zone. He threw a lot of fastballs tonight, but the slider has been really good, too,” Ole Miss coach Mike Bianco said. “He just does a great job of filling up the zone with premium stuff out there.”