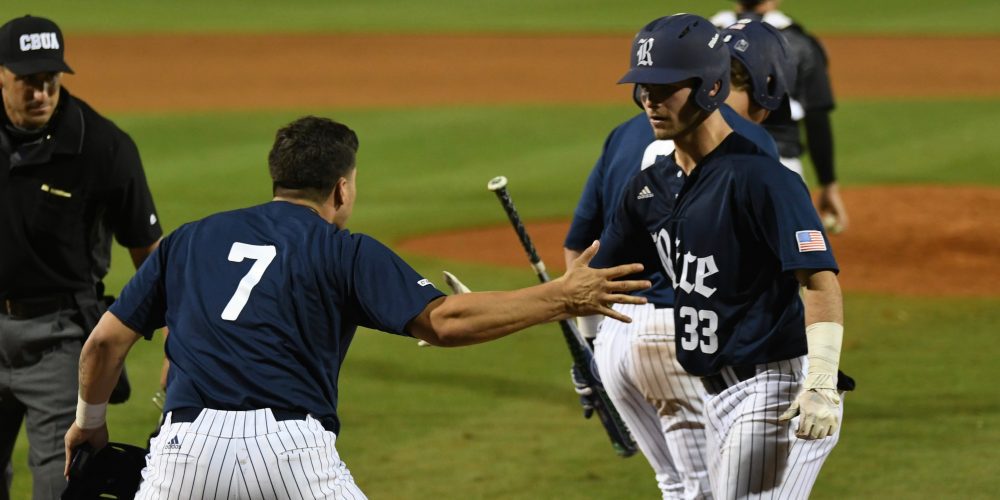 • Freshman Justin Collins comes up big for the Cardiac Owls
• Breaking down the duel between Rice’s Matt Canterino and UCF’s Joe Sheridan
• Veteran hitters, plus Derek Casey and Andrew Abbott, come up big for Virginia

ORLANDO — On Feb. 17, 2017, Justin Collins had Tommy John surgery, which cost him all of his senior season of high school baseball. Exactly one year to the day after that low point, Collins got a chance to play the hero for Rice.

In his second career collegiate game, Collins started at catcher and hit cleanup for the Owls. He strolled to the plate in the eighth inning with his team trailing UCF 2-1 and a runner on first base, and with one swing of the bat, he changed the game. Collins ambushed a first-pitch Eric Hepple cutter that failed to cut, smacking it over the left-field fence for a no-doubter two-run homer that put the Owls ahead for good. The ninth inning provided more drama, but the Owls held on for a 5-4 win, one day after Chace Sarchet’s walk-off two-run homer had given them another comeback victory.

“The whole offseason, we just preached, never give up,” Collins said. “You saw last year the team did that, pretty much — they had to come from behind to win the conference tournament. That’s what we preached the whole offseason, and obviously it shows in the first two games, that we’re not gonna give up.”

The Owls weren’t sure what to expect from Collins in the short term when he showed up on campus in the fall, coming off Tommy John. In the long term, they expected him to be a star — a nimble blocker and soft-handed receiver behind the plate with some serious thump in his righthanded bat. It was just a matter of getting healthy and getting comfortable.