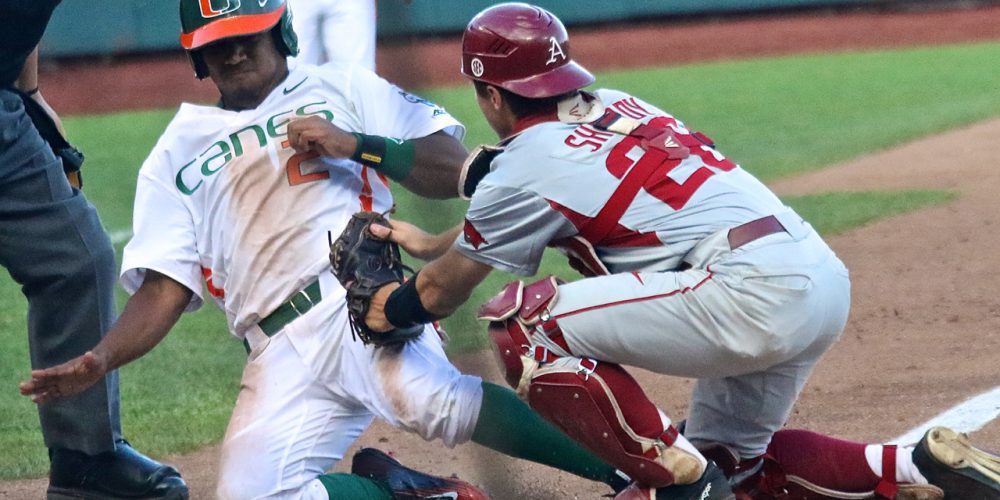 OMAHA — Jacob Heyward couldn’t get a sacrifice bunt down in the ninth inning, but he atoned for that with a game-winning single to center field to score pinch-runner Carl Chester. Miami defeated Arkansas, 4-3, Monday afternoon in the first elimination game of the 2015 College World Series.

It was just the culmination of a dynamic, career day for Heyward. He blasted a two-run homer, created a run with his wheels and topped it all off with the game winner against Arkansas top prospect Zach Jackson.

After four innings of inaction, Heyward’s long two-run homer to left field in the fifth inning got a back-and-forth match moving. Arkansas answered with a run in the sixth inning on a Rick Nomura infield single and tied the game when Bobby Wernes singled home a run an inning later. But Razorbacks’ star Andrew Benintendi grounded out with a chance to put Arkansas ahead.

Heyward created a run in the bottom half of the inning to retake the lead. After singling up the middle, he stole second. Then he made an aggressive play on a grounder in the hole on the left side, breaking for third. Shortstop Michael Bernal’s throw got away at third base and Heyward darted for the plate, sliding in before pitcher Lance Phillips could take the throw.

Arkansas again came back in the eighth inning. Three straight singles tied the game and put the Hogs in position to take their first lead of the game, but after Clark Eagan popped out, Cooper Hammond came on and induced a double play with his first pitch. It was another missed opportunity in the ninth inning by Arkansas that set up Heyward’s final heroics. The Razorbacks loaded the bases, but Bryan Garcia got Nomura to ground out — the first time Miami had retired him all day.

Miami’s Willie Abreu hit a leadoff double off the wall to bring up Heyward, who failed twice to get a bunt down, but didn’t fail to win the game, hitting a breaking ball over the shortstop’s head for the game winner.