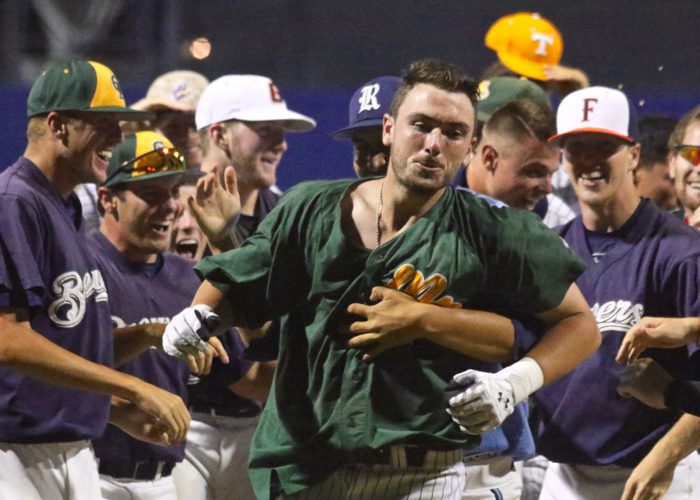 Bell, who is playing with the Menlo Park Legends this summer, said he has been working with the Legends’ coaching staff this summer to widen his batting stance and crouch more to try to unlock some more pop in his bat. 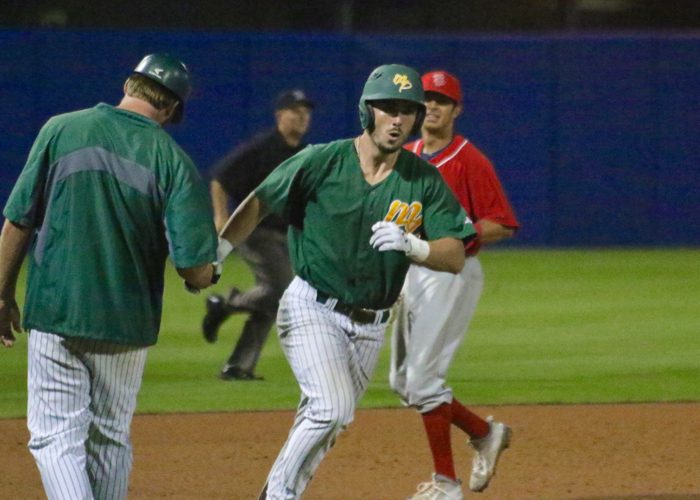 “With my batting stance, I used to be a little taller at the beginning of the summer. I’ve been working with our coaches a lot on lowering and using my legs and my base more,” Bell said. “It’s really helped me out a lot. I feel like I’ve gotten a tremendous amount of more power just using my whole body and having everything work together as one.”

The results have been a little slow as Bell entered the all-star game hitting .200 with eight RBIs in 14 games, but the former Orange Coast College outfielder showcased his power potential in batting practice with a dip-and-rip approach that netted three long balls over the left-center field fence.

After ripping an offspeed 3-2 pitch to third base (where Conejo Oaks/Cal Lutheran’s Kyle Sanchez made a nice back-handed play) in his first at-bat, Bell jumped all over the first pitch he saw from Santa Barbara closer Justin Camp (Auburn). He tattooed a 90 mph fastball off the scoreboard for the walk-off winner.

Though Camp had a very forgettable outing, entering with a 4-3 lead aand allowing four runs in two-thirds of an inning, he did show some of the best arm strength in the game. Camp ranged from 90-92 mph, but was pretty consistent at 91. He also used a 72 mph changeup and an 81 mph curveball that dropped 12-to-6. When he started the hook in the zone and let it break into the dirt, hitters had a tough time checking their swing, but Nick King, of the SLO Blues, was able to poke one he left up in the zone on the outer half to right field with two strikes to start the ninth-inning rally. 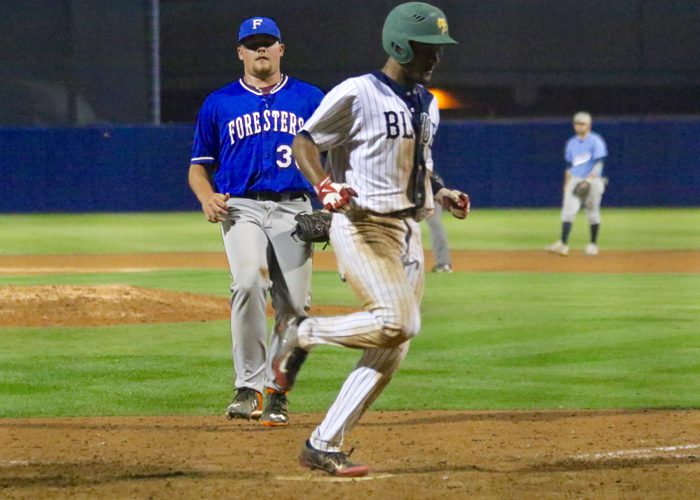 King was in contention for MVP of the event prior to Bell’s home run. The Georgia senior showed off a slick glove, charging in on a slow grounder and throwing on the run, but the defensive stalwart, who committed errors in just three games while starting all 54 games at shortstop for the Bulldogs, also showed off his speed. He beat out an infield single in his first at-bat and twice stole second and third, racking up four steals by consistently getting great jumps on the pitchers and not giving the catchers much of a shot at throwing him out. King finished the game 2-for-3 with a walk and two runs. He is hitting .302 with 16 runs and five doubles in 17 games this summer and has swiped eight bases, being caught only once.

“This is my last year of summer ball and I wanted it to be something to remember,” King said. “No matter if it’s summer or during season, I want to take every game like it’s my last because it is going into my senior year. It flew by way too fast, but you learn to cherish these moments and games like this.”

Coming from Riverside City College, King hit .242 with just six extra-base hits and 15 RBIs for Georgia as a junior, but he thought he wasn’t aggressive enough at the plate, so he’s really been focused on improving his hitting by attacking more.

“Definitely for the rest of the summer season and definitely at Georgia, I’m definitely going to swing earlier in the counts and hopefully try to hit more first pitches and first-pitch fastballs,” King said. “Your baseball career is too short to take pitches and let those good pitches go by. My thing is to just swing and whatever happens, happens.”

Here’s a look at some other prospects who stood out Wednesday: