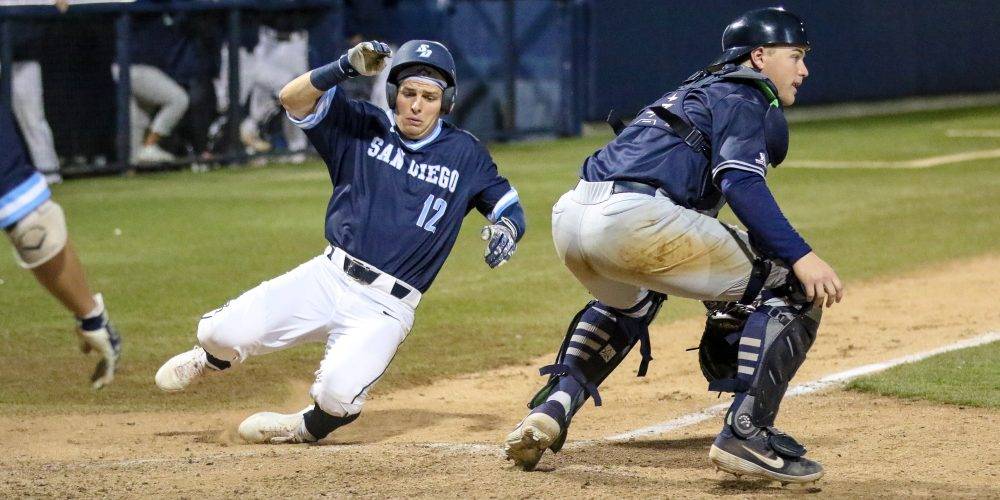 SAN DIEGO — Casey Jacobsen jumped up to snag the chopper hit by Chris Colarossi. With the bases loaded and one out in the 10th inning, the BYU third baseman needed to turn a double play or throw out the runner heading home.

Jacobsen’s leaping snag had taken his momentum toward the third base line, but he was a little too far from third to step on the bag and throw across the diamond. He chose to come home. He threw a strike that hit catcher Noah Hill in the mitt.

Hill muffed the throw. He reached down and palmed the baseball. He started to hold it up as San Diego pinch runner Connor Doyle stepped on home plate. A broadcast replay appeared to show Hill had control of the ball while still having his foot on the plate, but home plate umpire Jon Jackson saw different in the moment and immediately signaled safe, sending the Toreros’ bench spilling out of the dugout to chase after Colarossi. BYU head coach Mike Littlewood did the same, but he was hunting Jackson, seeking an explanation for a play the Cougars’ dugout thought was an obvious out.

A potential umpire meeting might have created an awkward moment for the Toreros’ mob that was already dumping a bucket of water on Colarossi. Instead, Jackson remained resolute.

“He said he saw it and he wouldn’t get help,” Littlewood said after the 6-5 walk-off loss. “He just wouldn’t. He said he saw it, but I mean we clearly saw it from our side that he was out. It’s surprising.”

The victory clinched an important West Coast Conference series win for San Diego (21-10, 6-5) after the Toreros had dropped two of their first three WCC series. Head coach Rich Hill remained steadfast in a game that featured five lead changes, including his team three times being unable to hold the lead.

“I always thought throughout the entire game we deserved to win. We put good at-bats together. I thought our team played with energy. I just thought we deserved to win,” said Hill, who is optimistic about his team’s potential this season. “I believe, I mean really believe we’re going to win the WCC championship. We’re going to find a way to do that.”