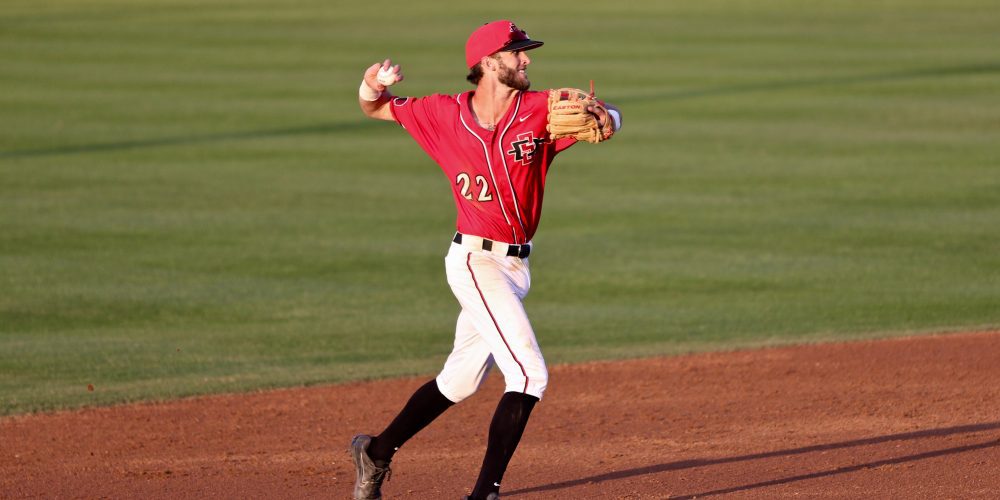 SAN DIEGO — When David Hensley came off the mound in the eighth inning, he went to the San Diego State coaching staff.

“I want the ball in the ninth.”

The Aztecs had planned to turn the ball over to freshman Casey Schmitt for the final three outs. But Hensley’s conviction changed the coaches mind.

“Of course you’re going to give him the ball because that’s the right mindset you want. To say, ‘Hey I want to finish this,’” San Diego State head coach Mark Martinez said. “We were a little nervous doing it, but at the same time, when a guy expresses that type of want, you give it to him and he won the game for us.”

Hensley flinged 89-91 mph fastballs at a dynamic UNLV lineup. He struck out two and did not allow a baserunner in two scoreless innings — the longest outing of his career. He earned his first career save holding a one-run lead after the Aztecs rallied from a five-run deficit to beat the Rebels, 7-6, Saturday night at Tony Gwynn Stadium. The Aztecs improved to 29-14 (12-7 Mountain West) while UNLV fell to 29-16 (12-7).

The 6-foot-5 Hensley led the team in hitting last year (.357, 3, 31) and has the second highest average this season (.345, 3, 21). He is a shortstop by trade, but is used to moving around the diamond. Because of his consistent approach at the plate, the coaching staff has plugged him in different roles to make sure his bat stays in the lineup. He has played every defensive position but catcher during his four-year career at San Diego State, so it wasn’t surprising when he took on a new role as a reliever this season.

He had thrown just four innings entering Saturday night, but he and Schmitt — the team’s starting left side of the infield — have taken on bigger roles as of recent.

“We didn’t use David or Casey much in the early part of the year because we felt like our pitching staff was kind of set up and then we had some injuries, some guys go down,” Martinez said. “Some bad pitching performances and we also taxed the heck out of our bullpen early in the year, so all of a sudden they started getting more opportunities.”