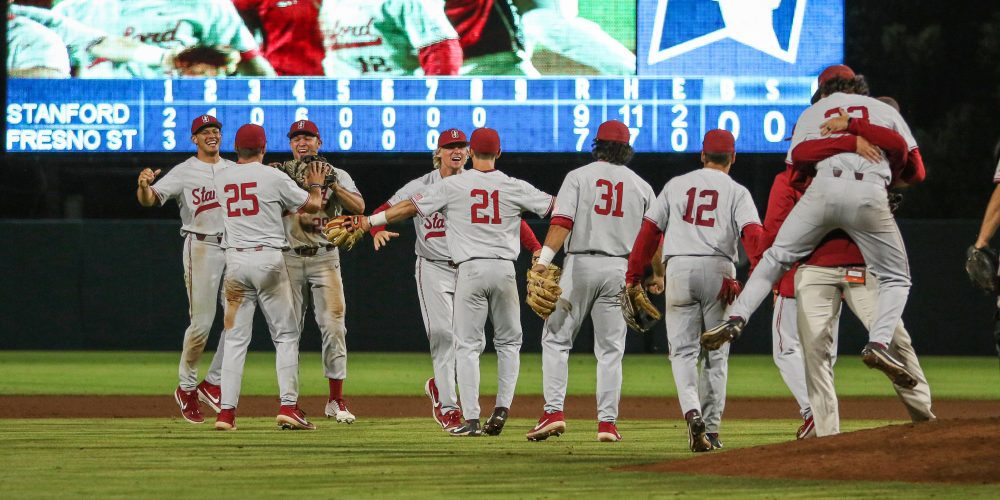 Stanford came out of the loser's bracket to win its regional. (Shotgun Spratling)

STANFORD, Calif. — The wave of euphoria and the emotional crash hadn’t fully hit Maverick Handley. He wore a chary smile like he was afraid the demons that haunted Stanford the last two years might not quite be gone.

Stanford had come through the loser’s bracket to win the Stanford Regional to advance to the super regionals for the first time since 2014. It finished off its run by defeating a game Fresno State squad by a pair of runs for the second day in a row to earn the Stanford Regional title. Following Monday’s finale at Sunken Diamond, Handley was simultaneously overjoyed and relieved.

“I’m just happy it didn’t end the same way [as] the last two years,” Handley said. “We finally beat that bugaboo, those demons, especially like…especially after this was the exact situation we were in. We lost the Saturday game. The Sunday game Miller is throwing it for the third time. You’re like is it really going to happen three times in a row. What’s the saying…?”

Third time is the charm.

The last two years Stanford, as a regional host, won its opener against the No. 4 seed, but lost to Cal State Fullerton on Saturday to fall into the loser’s bracket. The Cardinal rallied each time with a stellar pitching performance in the first game Sunday before dropping the nightcap and the regional championship to Fullerton.

But the third time was the charm as Stanford got over the hump Sunday night with an 8-6 win to force Monday winner-take-all regional Game 7 and beat the Bulldogs 9-7 behind a six-run fifth inning and 4.1 hitless innings of relief by Brendan Beck and Jack Little, who both took the mound on minimal rest.

Behind the plate for it all was Handley, who lived the charmed life this weekend.