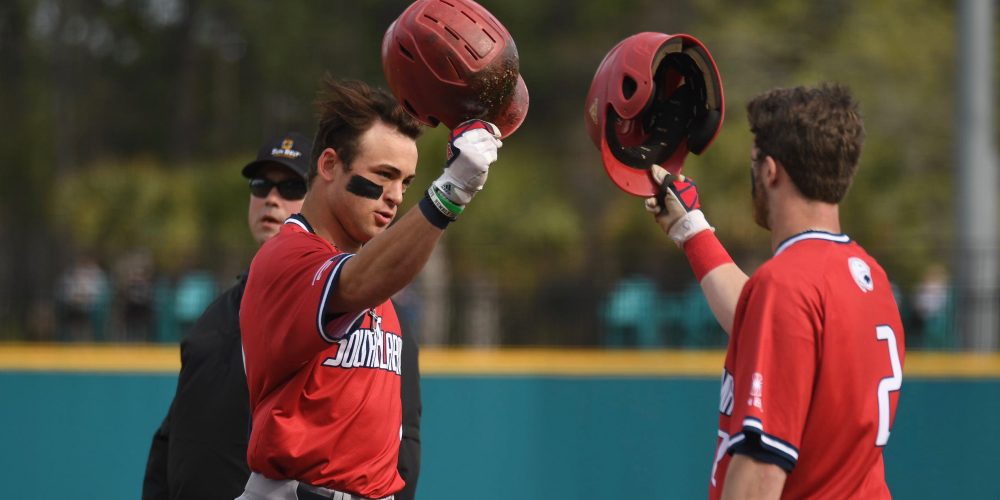 CONWAY, S.C. — The first half didn’t transpire quite as South Alabama envisioned it back at the start of the fall. That’s largely because the offseason didn’t go as the Jags drew it up.

By the time opening day rolled around, South Alabama had lost three key cogs in its powerful lineup to injuries that would prove season-ending: slugger Eddie Paparella (Tommy John surgery), sparkplug shortstop Drew LaBounty (devastating eye injury) and athletic outfielder Colton Thomas (broken arm). Suddenly, a lineup that looked like it would be one of college baseball’s best had to gel all over again.

The Jags raced out to a 7-1 start anyway, but then they hit a bump in the road, losing six straight games, including a four-game sweep at the hands of Texas Tech. The Jags regrouped, and scrapped and clawed their way to a 16-11 record heading into a big Sun Belt showdown series this weekend at Coastal Carolina.

“I’m super proud of our team. I looked at it, last year we were 16-11 at this time, but we got to 16-11 differently last year,” South Alabama coach Mark Calvi said. “This has been a little bit different because you’ve lost guys for the season. It happened before the season ever started. You look up and you see our schedule, and it was a tough schedule with everybody that you thought was gonna be on the roster; it got even tougher when those guys went down.

“You’ve got some guys in their draft year, it was just a matter of settling in. OK, you’ve just got to establish the new normal. It was like, ‘OK, these guys aren’t coming back this year. This is where you’re at, this is where you’re at,’ guys moved around in the lineup. It was just establishing what normal is without those guys, and it takes more than a week. It takes a little bit of time.”

But now, South Alabama is starting to look more like the team we expected it to be when we ranked it 20th in the preseason. The Jaguars kicked off their weekend in Conway with an 11-6 win Friday night, getting eight strong innings from righthander Tyler Carr and showing off admirable plate discipline up and down the lineup, drawing 15 walks and rapping out 10 hits as part of a balanced attack. The Jags entered the night with 163 walks, 13th-most in the nation and second in the Sun Belt behind Coastal’s 186. As the season has progressed, their approaches have gotten better and better.