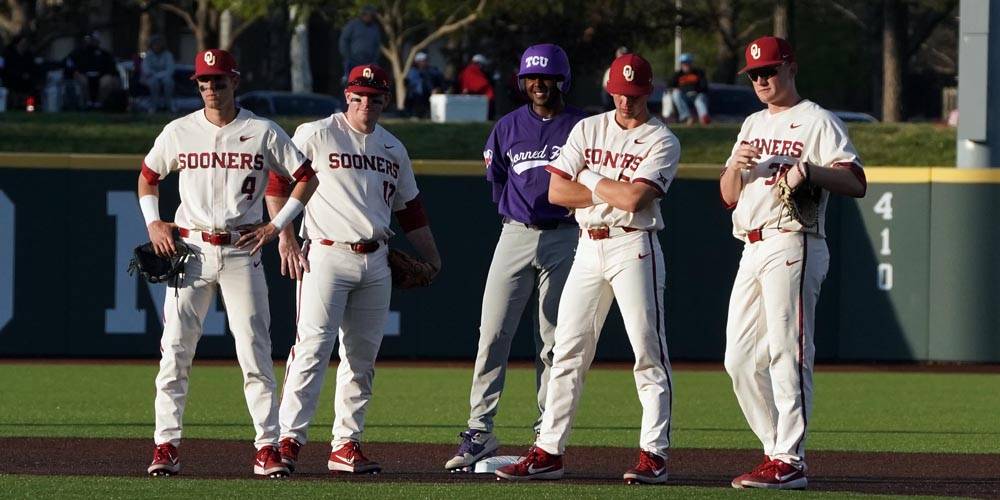 As you can see, TCU was all smiles today, while Oklahoma was a wee-bit more brooding.

NORMAN, Okla. — Yogi Berra made the saying “It’s like deja vu all over again” enter the popular vernacular.

And deja vu is what it was looking like in Norman as the bottom of the ninth inning progressed. Back on Friday night, three-hole hitter Brylie Ware went up to the dish and stroked a game-winning RBI single to score Diego Muniz to beat TCU 7-6 in jog-off fashion.

Fast forward about 22 and a half hours and here we were at L.Dale Mitchell Stadium with TCU leading 4-2 and OU batting in the bottom of the ninth inning with one out and men on second and third. Frog freshman pitcher Marcelo Perez was throwing 95 mph heat but he was now facing the hero three-hole hitter who provided the fireworks the night before.

Would history repeat itself? Would Ware wear out Perez and tie the game with a single? Or worse yet for the Frogs, provide the three-run homer to win another jog-off game?

After what seemed like a 22-pitch at-bat with a record number of foul offs, Perez threw a breaking ball that tailed away and left Ware swinging at air. Two outs.

But that wasn’t the end of the white-knuckle ninth inning. DH Justin Mitchell then came on to try to salvage the game with two out. Mitchell cranked into a Perez fastball and sent a screamer to center field. The OU crowd started to cheer, anticipating a two-run shot to deep terra firma. But TCU centerfielder Johnny Rizer caught that laser in mid-stride right in front of the warning track, allowing the Frog fans to breathe again.

But Johnny Rizer rose to the occasion by chasing down this wicked hit and securing the 4-2 win.

TCU got it’s revenge, 4-2, to even the series with the Sooners.

More soon, but for now, this…