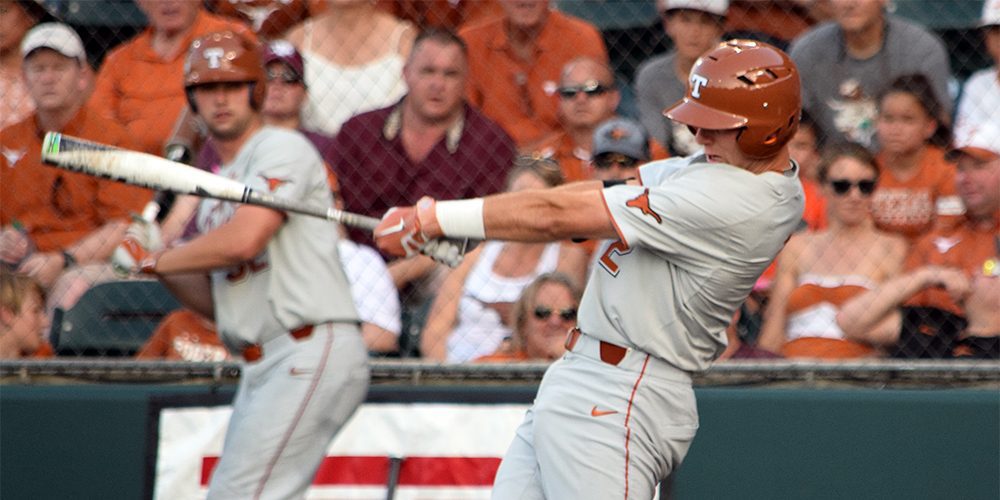 Kody Clemens is an electric hitter for the Longhorns. (Kendall Rogers)

AUSTIN, Texas — As Kody Clemens goes, the rest of the Texas team tends to follow suit.

So, the first inning of Saturday’s winners bracket game between the Longhorns and Texas A&M was a good sign of things to come for Texas in a dominant 8-3 win over its rival from the Southeastern Conference.

For much of the season, Texas A&M righthander Mitchell Kilkenny has been Mr. Steady. When the Aggies needed a consistent and strong start, the junior righty was that guy.

But Saturday was different. There was a sweltering heat on the field, and an intense buzz in the stands. This wasn’t your normal Saturday night game in a regional. This one meant a little more for very obvious reasons, and the atmosphere reminded me of some of those old school regional bouts in Austin during the Augie Garrido era.

Kilkenny wasn’t his usual self. For once, the big stage got to him a little bit, and the Longhorns, namely Clemens, made him pay dearly for it.

Kilkenny allowed a single to David Hamilton to lead off the game, hit two-hole hitter Duke Ellis and wasn’t commanding his slider and fastball well. The slider, which is his go-to secondary offering, was consistently being left over the plate.

Clemens, as he’s done so many times this season, made a pitcher pay for an imperfect pitch.

On a 2-1 offering from Kilkenny, Clemens unloaded on a slider from the righty, sending the ball well over the wall in right field and sending the UFCU Disch-Falk Field crowd in attendance into an absolute frenzy.

Clemens had set the the tone of a game yet again. The rest of the Longhorns followed suit.

“I think I discussed this before, but I had Anthony Rendon (at Rice) his freshman and I think he hit 26 homers. That was one of those magical years, and that was with the old bats. What Kody is doing right now is pretty remarkable,” Texas coach David Pierce said. “What’s most impressive to me is that Kody is having high quality at bats with a disciplined approach, and he’s getting really good results.