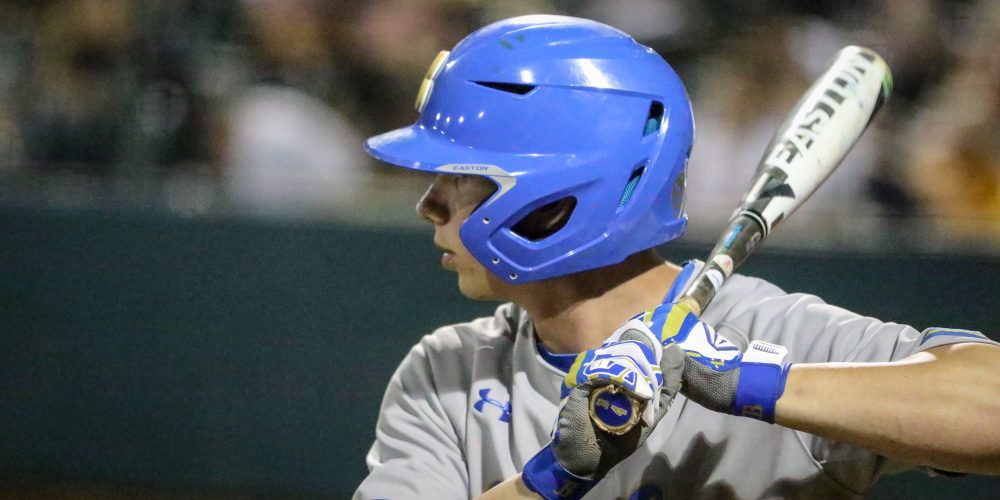 Kevin Kendall had two hits and an RBI. (Shotgun Spratling)

No. 1 Bruins Continue to Find Ways to Win

PHOENIX — Holden Powell jogged in from the UCLA bullpen behind the left field fence and observed the predicament into which he was being thrust.

The sophomore righthander was handed a 3-1 lead and a 3-1 situation with runners on the corners. There were no outs and Arizona State slugger Spencer Torkelson — he of the 40 combined home runs the last two years — was strolling to the batter’s box as the potential go-ahead run.

Powell was being asked to get a six-out save for only the second time in his career. The first time, at Utah last weekend, Powell allowed two runs to score (one inherited runner) and needed a play at the plate on a ball that bounced away from the catcher to avoid blowing a three-run lead. But that set the precedent and Powell rose to the occasion Friday night in the Bruins’ 3-2 series-opening win at Phoenix Municipal Stadium.

“I just told him, ‘Hey that run at third doesn’t mean anything. It’s really about keeping that guy at first and getting the hitter,'” UCLA head coach John Savage said. “It wasn’t an ideal situation, but I thought Powell was maybe as good as he’s been all year with his command and his stuff.”