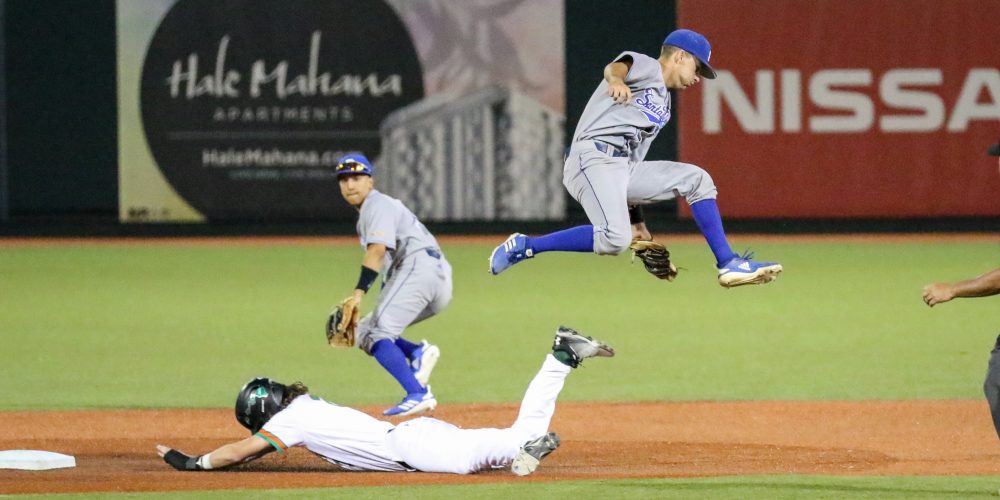 McClain O'Connor leaps over a runner to snag a throw. (Shotgun Spratling)

HONOLULU — Ben Brecht was cruising along.

The UC Santa Barbara junior lefthander had given up four hits and a run to Hawai’i through six innings. He had seven strikeouts and hadn’t allowed a walk.

Brecht came out to start the bottom of the seventh inning. But before he could complete his warmup tosses, Gauchos head coach Andrew Checketts and the trainer came out to the mound and Brecht was soon heading to the dugout.

While UC Santa Barbara fans that stayed up late back in Southern California to watch the live feed may have been holding their breath, it was fortunately only a false alarm.

“He said he was tired and he was hanging a little bit. I think it was just some fatigue,” Checketts explained. “So I said, ‘Alright, you’re done.’ Then I look up and he’s running out to the mound, so clearly he didn’t hear me.”

The umpires allowed Checketts to remove Brecht and the Gauchos took care of business the rest of the way in an 8-2 win at Les Murakami Stadium Friday night that moved UCSB one victory closer to securing its first conference title since 1986. Santa Barbara (42-7, 16-3 Big West) holds a two-game lead over Cal Poly with five games remaining.

Brecht exited having thrown 80 pitches, but he had done plenty enough to earn his 10th win of the season. 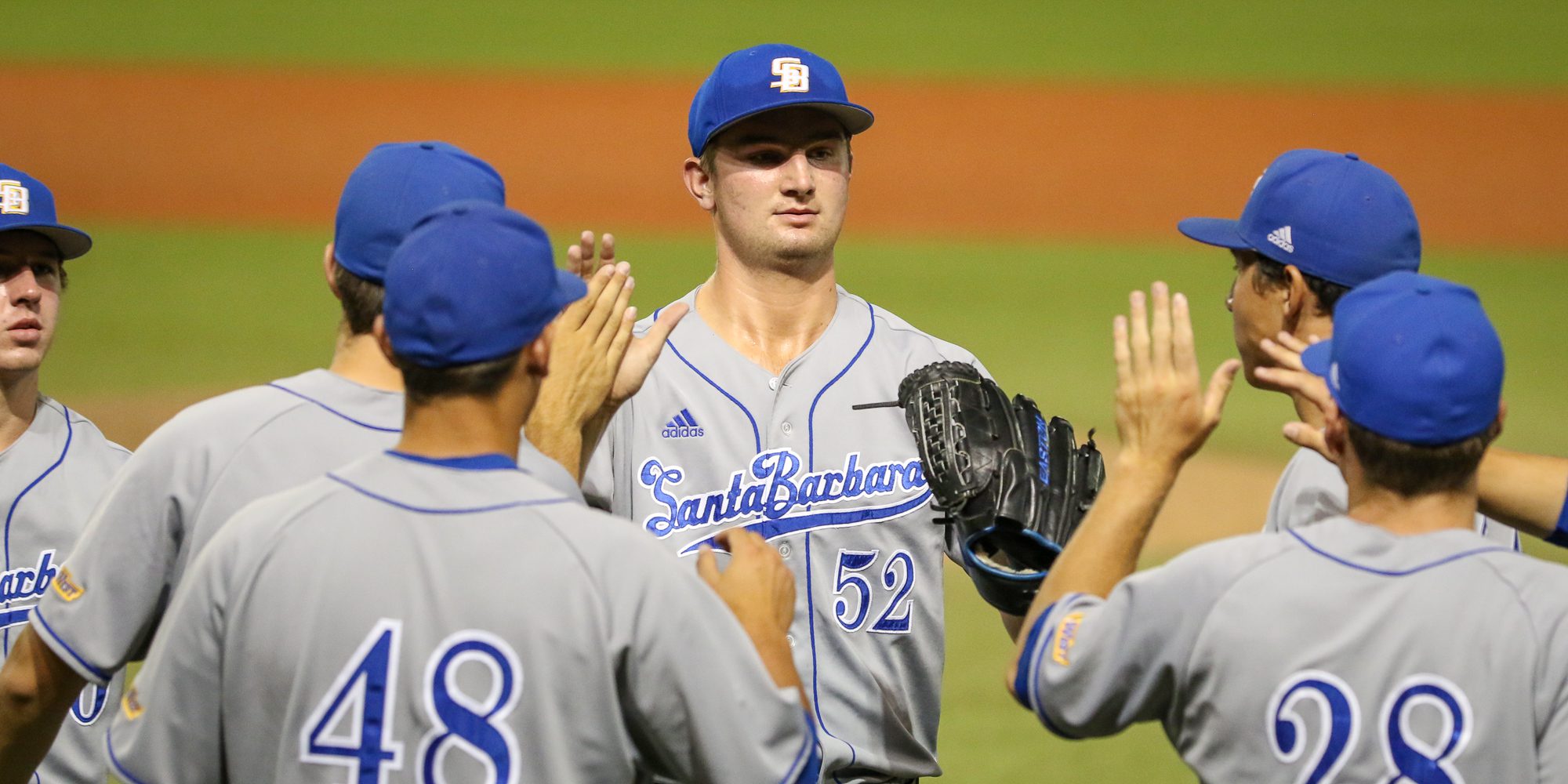 “In terms of win a baseball game, he’s figured out how to do that piece of it — make the clutch pitch, hang in there, finish some hitters, not get rattled if they score a couple runs off you and he’s done that for us all year,” Checketts said. “That’s how he’s been able to win those games. That’s why he’s 10-1.”

Brecht was able to pitch off his fastball the first time through the lineup, land his slider the second time through the order and use his changeup in big spots to keep the Hawai’i hitters off balance.

His biggest pitch of the night was a second inning changeup. The Warriors (20-25, 8-11) loaded the bases without an out, getting two singles and a hit batsmen, but Brecht wasn’t rattled. He used a first-pitch changeup to Dallas Duarte to get a 6-4-3 double play that scored Hawai’i’s only run against Brecht, but also killed any rally.

The Warriors managed only two balls out of the infield the next four innings against Brecht. He struck out five in the third and fourth innings and needed only 19 pitches to get through the fifth and sixth innings.

“I thought he had a pretty good fastball early. The command was good. He was able to locate,” Checketts said. “I thought he was competitive and gave us a chance.” 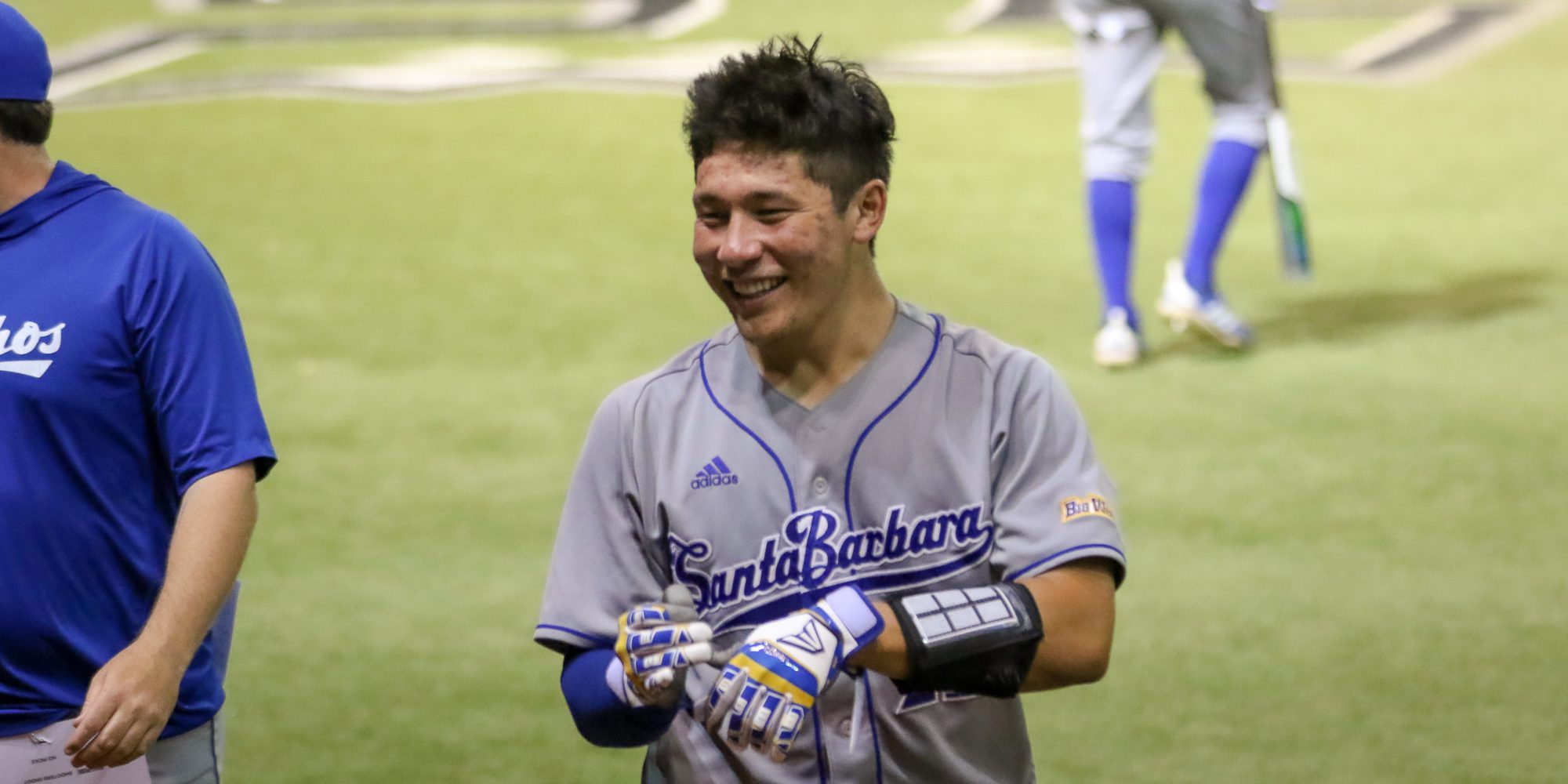 UC Santa Barbara flamethrowing closer Chris Lincoln was pumping gas in the bullpen, getting prepared to come into the game in the bottom of the ninth inning. The Gauchos were ahead 4-1 and Lincoln was ready for the save situation.

But then catcher Eric Yang laced a line drive into center field that bounded all the way to the wall. Yang cruised into second base with his second double of the night. Thomas Rowan followed with his own double, driving a ball to the wall for the fourth time on the night.

Hawai’i went to the bullpen. Armani Smith got hit by Calvin Turchin’s first pitch. Three pitches later, Andrew Martinez had added three runs to the scoreboard. The Gauchos lead had blossomed from 4-1 to 8-1. Lincoln sat down and would not be needed.

Instead, less-frequently-used righthander Alex Patterson got loose and finished off the game for UCSB.

“It changes the dynamic of the game when you’re able to extend the lead there,” Checketts said. “We were able to get [Michael] McGreevy out of there, so there’s a shot that we have him for a short stint tomorrow. We don’t use Lincoln, so we have him for one or two tomorrow. We didn’t use [Shea] Barry. We didn’t even get him up in the pen and Patterson is able to come in and clean it up at the end.”

Finishing strong is particularly important this time of the season. Saving the bullpen on the opening day of a regional or super regional could be the key to advancing to the next stage .

“We’ve talked a lot about being able to extend and what that does for the bullpen,” Checketts said. “Being able to continue to have quality at-bats at the end and how that changes what we do, so they’re aware of it. They know at this point just in terms of trying to win a weekend series.” 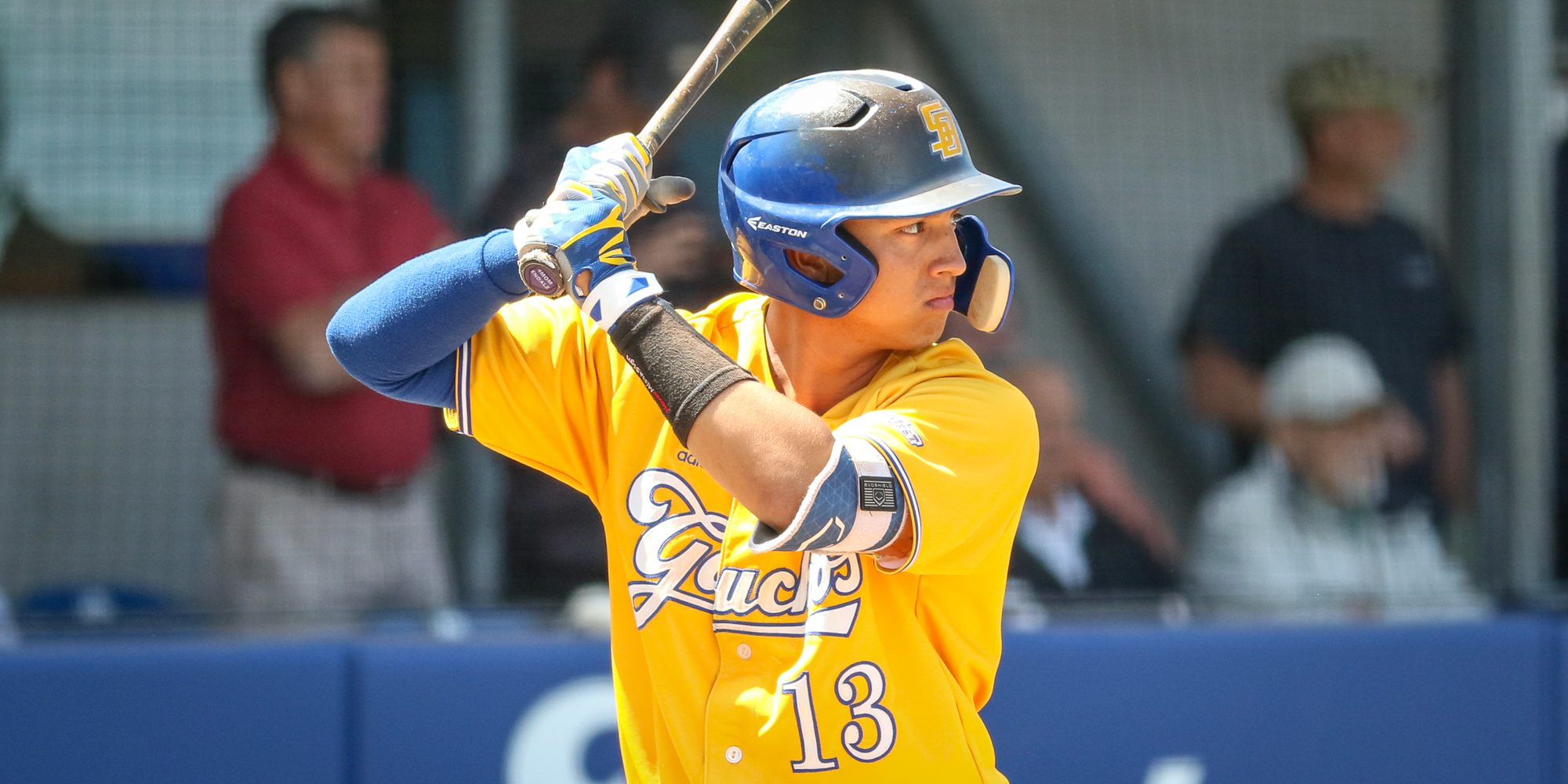 Andrew Martinez has come on during the month of May. (Shotgun Spratling)

The big blow in the ninth inning came off the bat of seven-hole hitter Andrew Martinez. It was his third home run in six games and the eighth of the season for the 5’11” sophomore middle infielder.

Martinez is coming off one of his strongest weeks as a Gaucho. He was named Big West Player of the Week on Monday after going 7-for-13 (.538) with four extra-base hits, including two home runs. He drove in five runs and scored four more as the Gauchos outscored their opponents 35-10 last week.

Martinez has hit .378 over the last three and a half weeks since his average dipped to .252 in the middle of UC Santa Barbara’s series loss to UC Riverside. He has scored in 10 of the 11 Gaucho games during that stretch and has driven in 14 runs. He has walked once in each of the last five games, boosting his on-base percentage up to .411 for the season.

– Losing Ben Brecht for any amount of time would have been a significant blow to the Gauchos with only one more week during the regular season. Instead, the Gauchos took care of business, were able to stay healthy and now need any  combination of three wins or Cal Poly losses to earn a Big West title.

– Hawai’i needs to win out this season to avoid a losing record.