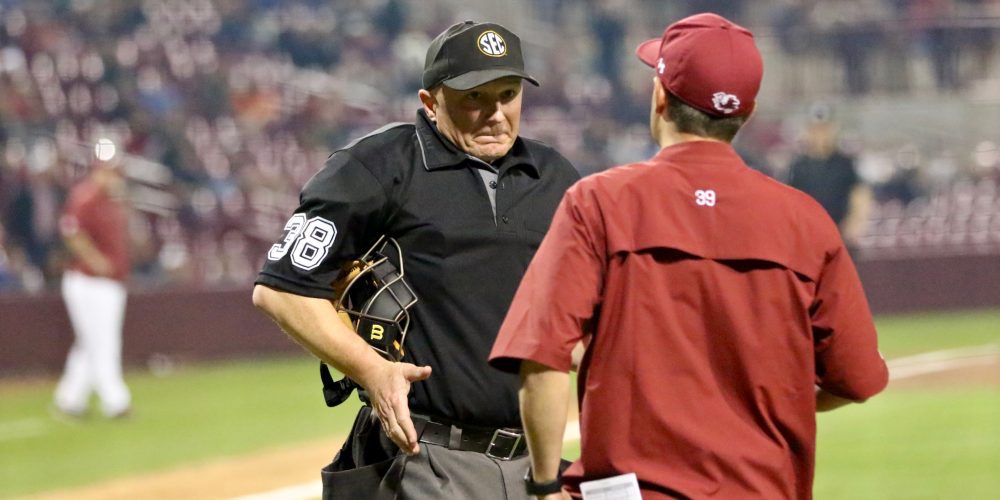 COLUMBIA, S.C. — Stars littered the lineups and two potential first-round picks were on the mound in the SEC opener between Florida and South Carolina. Any of them could have been the star of the show. Instead it was Scott Cline.

Among all the future professional players on the Gator and Gamecock rosters, the home plate umpire’s name is the first mentioned after Florida’s 7-3 win at Founders Park because Cline pushed himself into the limelight on this night.

Cline made an impact early and often.

It started with a first-inning plunking. Florida ace Brady Singer tried to come inside with a full-count fastball. The 95-mph fastball hit South Carolina two-hole hitter TJ Hopkins. Hopkins glared at Singer as he left the box and they exchanged words as Hopkins neared first base. There was some fire. There was some emotion. It was also all but over when Cline came sprinting out from behind the plate to break up something neither player considered serious after the game.

“It’s baseball. It’s a big game. It’s the first SEC series, all that is thrown into that,” Hopkins said.

“It was just two guys competing and the umpire really blew it up,” Singer said. “I didn’t try to hit him. Hopkins stared me down. He got hit by a fastball in the ribs. I don’t blame him. But the umpire, like I said, blew it out of proportion.”

Cline rushed out to the mound to talk to Singer and then issued warnings to both benches. It proved a critical warning for South Carolina as both head coach Mark Kingston and left fielder Carlos Cortes were later ejected, both in situations that deserved at best a warning. Instead of some common sense and a little leniency in the opening act of an emotional start to the SEC schedule, Cline enacted a zero tolerance policy.

Kingston’s ejection seemed particularly egregious as he was dismissed one pitch into the bottom half of the fourth inning — a called strike to LT Tolbert. From the dugout, Kingston innocuously said, “It’s a good thing I’ve already got a warning.”

Cline turned and gave Kingston the heave ho. “You’re out of here, Mark. You’re out of here. You’re gone,” Cline said as he strutted up the first base line to write the ejection in his notebook.

“I guess there was a disagreement on the strike zone and I didn’t get to see the rest of the game,” the Gamecocks first-year head coach said. “One thing I can say is I will always have my players back. Sometimes you need to exhibit that.”