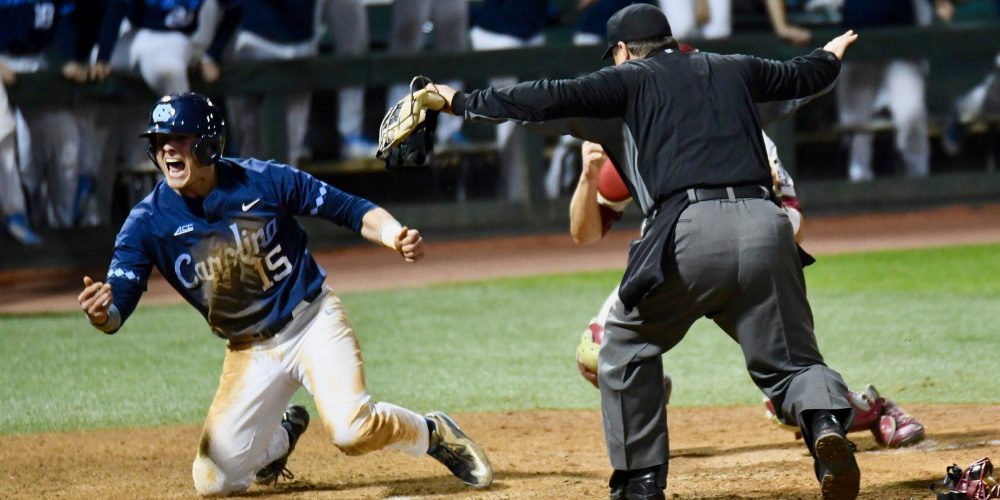 CHAPEL HILL, N.C. — The expression on Michael Busch’s face told the story. As North Carolina’s sophomore first baseman rounded third base and slapped hands with Mike Fox after smashing a seventh-inning homer to center field in the first game of Friday’s doubleheader split against Florida State, Busch’s face was split by an earflap-to-earflap grin.

And why not? Busch had already doubled, walked and hit an opposite-field two-run homer earlier in the game, and his second two-run shot of the contest gave UNC a 11-7 lead, helping propel the Tar Heels to a 16-8 win in the opener.

“I think more that smile was, I think that home run put us ahead by a good bit. That was a good moment, happy,” Busch said. “The last few games I’ve kind of gotten robbed of a couple, good catches in center field, good catches in right field, just hitting balls right at kids. So it was nice to see one getting out.”

Busch’s big day was just getting started, as it turned out. He added an RBI single in the eighth inning to cap a 4-for-5, five-RBI performance in the opener, then reached safely in all five plate appearances in the nightcap, drawing four walks and then singling to spark a game-tying rally in the ninth. FSU coach Mike Martin made a point to compliment Busch on scoring all the way from first one batter later, when Kyle Datres blooped a double down the left-field line. Busch slid head-first into the plate and was called safe on a bang-bang play to force extra innings, though FSU went on to score three in the 10th to win 6-3.

All told, Busch reached safely in 10 of 11 plate appearances on the day, going 5-for-6 with five walks, two homers, a double and five RBIs. That’s a good reason to grin.

“He’s so easy-going, got a great smile. I think that just helps you in everything,” Fox said. “His makeup is really good. Great demeanor, never seems like he’s having a bad day, doesn’t get down on himself. He’s got all those attributes that you can’t really coach.”