DaShawn Keirsey comes around for an inside-the-park homer. (Shotgun Spratling)

SALT LAKE CITY — In March, Utah might have folded up and called it a day.

After Utah scored three runs to take the lead in the fourth inning on Saturday, Washington immediately struck with a three-run answer. The Huskies added another run in the seventh inning to take a comfortable 8-5 lead at Smith’s Ballpark.

That’s when the Utes did what wouldn’t have happened early in the season and came alive. They took advantage of two hit batsmen and two walks, combining them with five hits to score seven runs en route to a 12-8 win and a share of the Pac-12 title — the first men’s title in any sport for Utah since joining the conference.

“We’ve gotten tough,” Utah head coach Bill Kinneberg said. “It’s been interesting because I don’t think we were very tough the first month of the year.

“We developed confidence and I think toughness. That kind of shows on these late-inning ballgames that we can win and shows the resiliency of this club.”

Utah started the season 4-11 before the conference schedule started. Then the Utes took two of three at Oregon, who had been ranked No. 9 a week prior. According to freshman DaShawn Keirsey Jr., that’s when they realized they could compete and began building confidence.

“Everyone on our team saw that we were just as good, if not better, than everyone else in the Pac,” Keirsey Jr. said. “We started winning a couple more series and it started getting serious.”

It will be real serious on Sunday for the Utes, who still need a win to lock up an NCAA tournament appearance with an outright Pac-12 title. If Washington wins, both teams will finish with 17-12 conference records and the Huskies will own the head-to-head tiebreaker, which will earn them the NCAA automatic bid.

The Huskies had a golden opportunity, but their injury-depleted bullpen — missing the 87 combined innings from seniors Troy Rallings and Will Ballowe and strained by another short outing by Saturday starter Joe DeMers — couldn’t hold the lead.

Cody Scaggari doubled home a run to start the seventh inning scoring. Hunter Simmons and Andre Jackson tied the game with back-to-back RBI singles. After a walk loaded the bases, AJ Young put the Utes ahead with a two-run single. And a batter later, Keirsey Jr. gave Utah some cushion with a two-run bloop double that landed just inside the left field line.

Dylan Drachler bounced back from taking the loss on Friday by getting the final six outs to even the series, earning Utah at least a share of the Pac-12 title.

But there was no water bucket dump or champagne popped. The Utes didn’t celebrate being a conference champion. They know there is another game tomorrow and it’s a winner-take-all game for the conference’s automatic bid to the NCAA tournament.

“What it allows us to do is to get to tomorrow. The goal of the team all year long was to try to get to a regional. After the first month, we knew we had to win the league. Now, at worst, we’re co-champs.

“We could have dog piled. We could have done all of those things, but they chose to do it just like a regular game because they know tomorrow is so important.”

To take an outright title, the Utes have to do something no one else has been able to do this year — beat Washington in a Sunday rubber match. The Huskies are a perfect 8-0 in those situations.

“By hook or by crook, you’re usually one game apiece rolling into Sunday. We’ve been in this situation before,” Washington head coach Lindsay Meggs said. “Believe it or not, we’ve given up a few seven spots before. We’ll bounce back. We’ll come back tomorrow and we’ll be excited to play for a Pac-12 championship.”

Washington took an 2-0 lead almost immediately. Jack Meggs and Chris Baker hit back-to-back singles and John Naff brought both of them home with a double just inside the third base bag. But Utah was able to quickly answer those runs.

Leadoff hitter DaShawn Keirsey Jr. singled to left field and eventually came around to score on a Dallas Carroll groundout. It was the first of three hits and two runs for the freshman, including a two-run, inside-the-park home run that briefly put Utah ahead 5-4 in the fourth inning.

“I was thinking triple and then as I started getting closer to third base, I saw our coach started waving me,” Keirsey Jr. said. “I tried to kick it into another gear to get there safe.” 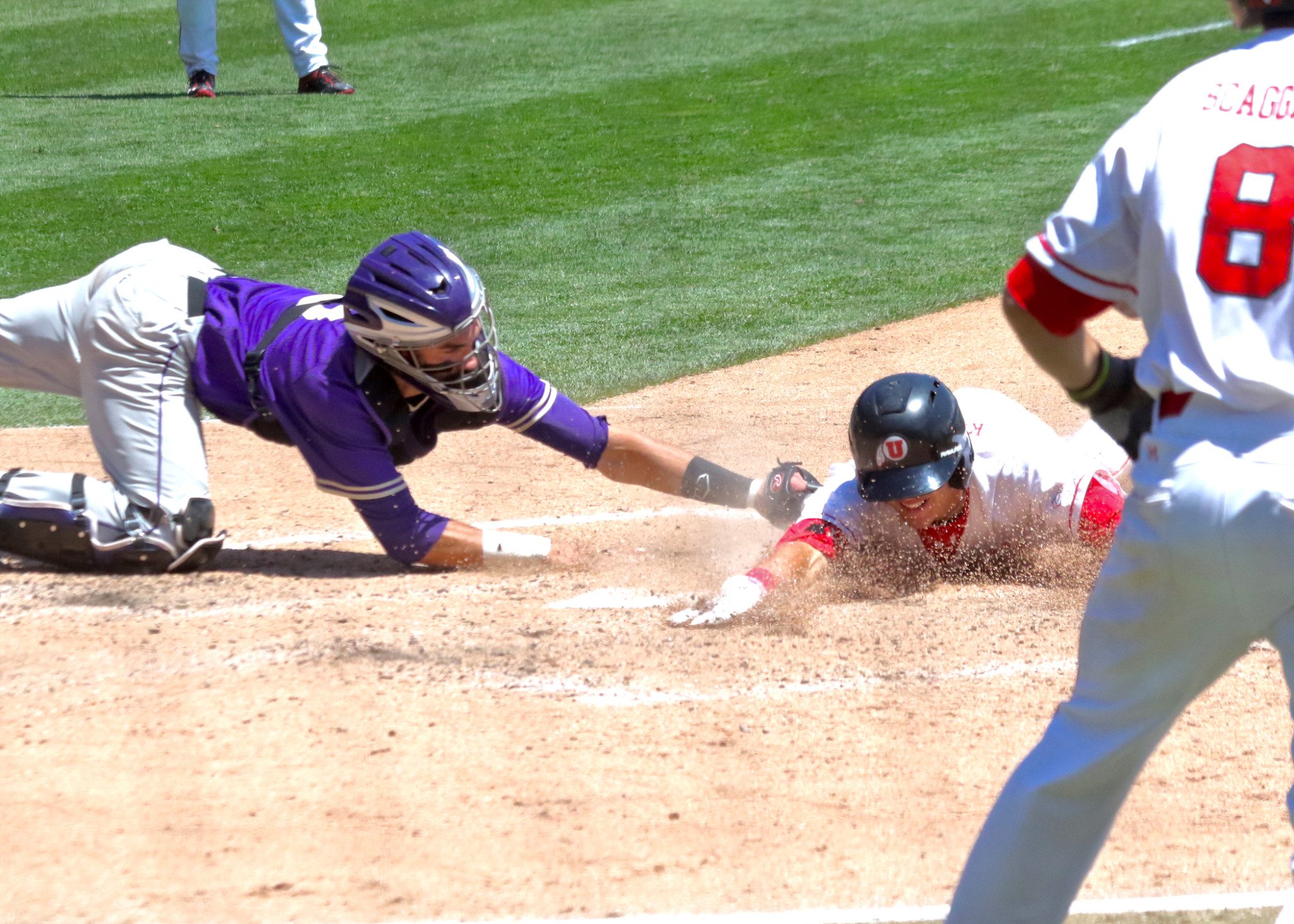 The play was a good representation of the speed element Utah sorely lacked previously. It has been even more evident on the defensive side of the ball playing in Smith’s Ballpark’s spacious outfield. Keirsey Jr. split starts in center field to open the season, but the freshman soon usurped senior Wyler Smith, who left the team soon after, and Keirsey Jr. has been in the lineup every game since.

“He’s going to be a star in this league,” Kinneberg said. “Him and [Oregon State’s Nick] Madrigal are the best two freshmen in the league I think. He’s meant a lot to us playing center field the way he does, leading off, the speed that he has. He’s going to be a tremendous player.”

With senior relievers Troy Rallings and Will Ballowe injured and not on the trip, Washington could have really used a strong and, more importantly, long outing from Saturday starting pitcher Joe DeMers.

But DeMers appears to have hit the freshman wall this month. He has not gone more than four innings in his last four starts after making it just 3.1 innings. He allowed three runs on six hits and did not record a strikeout for the fourth time in five starts. He struggled commanding his fastball and while his changeup had good action, it was the only pitch he was able to get bad swings on early. Once the Utes started sitting on the pitch and reacting to his other offerings, they were able to chase him from the game and get after the bullpen.

Because of DeMers’ struggles and the Huskies not having a consistent Sunday starter, the bullpen has been taxed heavily. The injuries to Rallings and Ballowe have put a heavy burden on the collective of Greg Minier, Spencer Jones**, Lance Berringer, Alex Nesbitt and Ryan Schmitten. The five and possibly Alex Hardy, who pitched the final 1.1 innings on Saturday, will be asked to pitch the Huskies to a title on Sunday.

“It’ll be everybody on call and all hands on deck,” Meggs said. “Whatever we have to do, we’ll do it. That’s what this game is all about.”

Schmitten will get the ball to start and will try to replicate his performance at USC to open the month when he took a no-hitter into the sixth inning and allowed only one hit in seven innings. He pitched one inning on Friday, picking up the save on 14 pitches.

No matter who Washington has to use on Sunday, Utah knows they will be fighting.

“They’re a great ball club,” Kinneberg said. “I expect their best shot no matter what happens. I don’t expect anything less than a dogfight.”

**Jones’ status is to be determined in the morning after he threw three innings on Saturday.

Utah head coach Bill Kinneberg talks about the Utes come-from-behind 12-8 win over Washington to earn a share of the Pac-12 title.

Kinneberg also discusses the impact of freshman DaShawn Keirsey Jr. in center field and batting leadoff and how his team has got tougher throughout the season:

Washington head coach Lindsay Meggs talks about blowing an opportunity to lock up the Pac-12 title in a 12-8 loss to Utah that saw the Huskies blow an 8-5 lead.

Meggs also discusses the success of the bottom of the lineup and the conference automatic berth coming down to the final game of the regular season:

Utah OF DaShawn Keirsey Jr. talks about the Utes’ come-from-behind 12-8 win over Washington to earn a share of the Pac-12 tournament that included a two-run, inside-the-park home run from Keirsey Jr.:

– Washington has had the success it has had this year because of the ability of everyone on the team to contribute. Lindsay Meggs calls the final game of the weekend “All In Sundays and that’s what it is going to take on Sunday to beat a Utah team that has its back against the wall in terms of getting into the NCAA tournament.

– Utah has been scrappy all season. After a rough start, they have an opportunity to get to the postseason for the first time since joining the Pac-12. The Utes have the advantage on the mound and the momentum. Can they close out with an outright title?