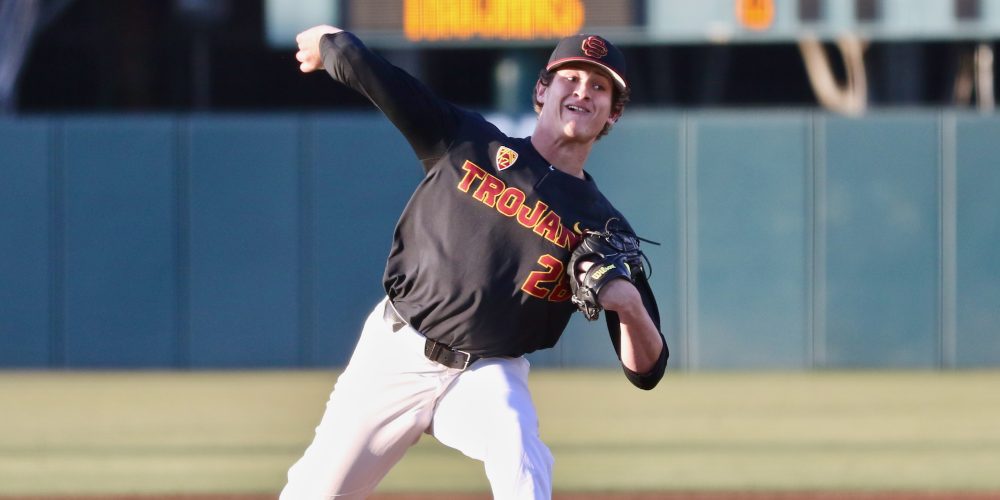 LOS ANGELES — USC closer Connor Lunn spun and fired wildly, throwing a pickoff attempt into center field and allowing the tying run to advance to third base. Undeterred, Lunn struck out the next Washington hitter and got a ground out to second base to lock up a 1-0 victory for the Trojans Thursday night at Dedeaux Field. Lunn made it interesting but earned his eighth save of the season. “We got a little scare there in the ninth, but Connor did a great job of working out of it,” USC head coach Dan Hubbs said. “I was really pleased with the intensity, the effort. I’m pleased with the way the guys are playing. We need to figure out how we’e going to score a few more runs, but we’ll take the wins as we can get them.” The lone run of the game came in the eighth inning when USC nine-hole hitter Angelo Armenta turned on an inside fastball and drove it into the trees in right field. “It felt good,” Armenta said. “I was just trying to stay on the fastball, stay inside it and think middle. Got a good piece. It was nice.” Armenta also cut down a runner at the plate in the third inning to keep Washington off the scoreboard. Both teams had players thrown out at home in the early innings before freshmen starters Kyle Hurt and Lucas Knowles settled in. From the third to sixth innings, they combined to record 23 outs with only one hit in between — a bunt single. Knowles allowed four hits over six innings. Hurt allowed three over seven.

“I thought Luke was great,” Washington head coach Lindsay Meggs said. “You can’t ask for anything more than that just in terms of results. He gave us innings, didn’t give up a run. He was outstanding.”

“Runs were hard to come by today, but I thought Kyle did a great job with seven scoreless innings,” Hubbs said.